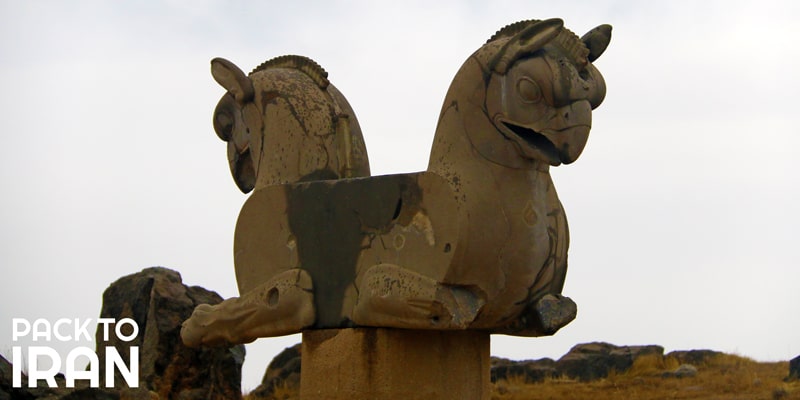 The cultural properties of Iran not only narrate the rich history of this country but also open a window to the world’s culture and human civilization. With its rich history, the vast country of Iran is home to valuable and astonishing heritages from the pre-historic era and ancient period to Islamic dynasties including splendid constructions and handicraft masterpieces, and intangible heritages that make this country one of the best places in the world for exploring and studying world’s history and culture. Iran has so many historical and cultural attractions that a traveler can’t visit them all during one trip to Iran, but here we have introduced some of Iran’s most important cultural sites and landmarks which are located on the route of Cultural Iran Tours and shouldn’t be missed visiting.

Located 60 kilometers away from Shiraz, Persepolis or Takht-e Jamshid was the ceremonial capital of the Achaemenid kings founded by Darius the Great in 518 BC. Persepolis is one of the most important ancient and cultural sites in Iran which is registered as a UNESCO World Heritage Site and is a complex including different palaces built by the order of different Achaemenid kings like Darius I, Xerxes, Artaxerxes, etc. These palaces are characterized by their immense columns and legendary bas reliefs and statues demonstrating symbolic and mythical creatures, ceremonies and rituals, and Persian soldiers and guests from different nations. Although this magnificent complex was ruined and burnt down by Alexander the Great, the remains of the palaces are still capable of showing the glory of the Achaemenid Empire’s art and culture.

Isfahan Imam Mosque or Jaame Abbasi Mosque is located by the Naqsh-e Jahan Square, which is one of the most amazing historical squares in the world. Like most of the attractions of Isfahan like the Sheikh Lotfollah Mosque, Ali Qapu Palace, and Chehel Sotun, Jaame Abbasi Mosque was built during the kingdom of Shah Abbas, when Isfahan was one of the most glorious cities of the world. With its gorgeous entrance gate, delicate tilework, a large dome, and spiritual atmosphere, this mosque is known as one of the most stunning and picturesque mosques of Iran.

Golestan Palace is a royal complex including seventeen palaces, museums, and art galleries that were constructed and renovated during different times including the Safavid, Zand, and Qajar eras. But, the Golestan Palace was mainly used as a governmental and residential palace by the first Qajar king Aqa Mohammad Khan Qajar who chose Tehran as the capital of Iran and the next six kings of this dynasty. Most of the renovations and changes were done in the Golestan Palace complex during the kingdom of Naser al-Din Shah Qajar. This historical palace is now located in the heart of Tehran (the capital of Iran) and is one of the top attractions of this city and also a UNESCO World Heritage Sites registered in Iran, and some of the palaces that should be visited are the Salam Hall, the Mirror Hall, the Ivory Hall, and the Edifice of Sun or the Shams ol Emareh.

4- The Zoroastrian Towers of Silence

Located in the historical city of Yazd, the Towers of Silence are one of the most amazing Zoroastrian monuments in Iran. The Zoroastrians believed that a dead person’s body is haunted by evil and it is not clean, therefore they neither put the corpse in a grave nor bunt it to keep the four sacred elements (water, soil, fire, and wind) away from any pollution. So, the Zoroastrians built circular towers as a place to leave the corpse on. The surface of the towers was divided into three parts assigned to men, women, and children. This dark tourism attraction is one of the most amazing attractions that you will visit in Iran.

The historical Tabatabaei House of Kashan is a unique representative of the marvelous Persian architecture of residential houses, which amazes every visitor by its symmetrical design and stunning ornaments like the stucco works with delicate designs and stained glass windows. Just like other traditional houses of Iran, Tabatabaei House has two main parts including Andarooni or the inner and private section where the family lived and the Birooni or the outer part used for hosting guests and holding ceremonies. This fancy house was built in 10 years by the great architect Master Ali Maryam during the 19th century for a famous carpet merchant Mr. Tabatabaei Natanzi and his family. Besides the Tabatabai House, there are other historical houses in Kashan that you can visit.

The ancient city of Pasargadae is located in Fars Province and is known as the first capital of the Achaemenids founded by Cyrus the Great who reigned from 559 to 529 BC. This ancient city which is registered as a UNESCO World Heritage Site includes the ruins left from the palaces of Cyrus, the remains of gardens known as the first sample of Persian Garden, and the astonishing Tomb of Cyrus the Great. This tomb is a simple yet glorious monument consisting six stone-made stairs topped with a tomb chamber with a gable roof.