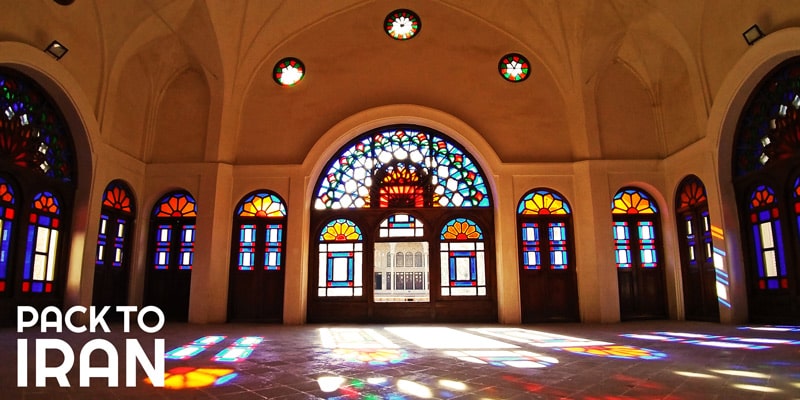 The Historical Houses of Kashan

Located 244 kilometres away from Tehran, kashan is one of the most touristic cities of Iran which is known for its enchanting historical houses. Boroujerdi House and Tabatabaei House are two of the most famous historical houses of Kashan that shouldn't be missed while visiting this amazing city.

Traveling around the world gives you the chance to get familiar with different lifestyles people have had in different cultures. Iran is one of the oldest known civilizations in the world and is one of the best places to discover how human life has developed through the olden time! There are many ancient cities with plenty of monuments in Iran which are the witness of people's lifestyle during the centuries. Located in the middle of the Iranian plateau, Kashan is one of the oldest cities of Iran and home to the earliest evidence of human presence ( Tepe Sialk) which dates back to the Paleolithic period. This city is also well known for having massive and eye-catching old houses which represent the unique and valuable Iranian architecture that has preserved its historical identity over time and the urban development of the city. The historical houses of Kashan manifest a unique architecture and interior design, so if you would like to have a trip back to the past time and feel the authentic atmosphere of old residential areas and discover how people used to live, do not miss visiting Kashan.

Most of the historical houses in Kashan were built by famous merchants of the city during the 19th century. Fortunately, some of these amazing houses have been preserved well and are among the top attractions of Kashan. Here we are going to introduce two of the most attractive historical houses of Kashan that are highly recommended to visit during your trip to Iran.

With its symmetric architecture and meticulously detailed ornamentation that amazes every visitor, Tabatabaei House is one of the most marvelous historical houses of Kashan. This house was constructed by Seyyed Jafar Tabatabaei Natanzi a famous carpet merchant of Kashan as a residential house for him and his family. Known as a great representative of an authentic Persian residential complex, this house was designed by the most famous 19th-century architect of Kashan, master Ali Maryam and it took almost 10 years to be built. Just like many other historical houses in Iran, the Tabatabaei House consists of two parts: The Andarooni or the Inner section which was the living place of the family, and Birooni, or the outer section which was used for receiving guests and holding official ceremonies.

The rooms are placed around the courtyard and based on how much sunlight they get, they were used in different seasons of the year. The stained glass windows of Tabatabaei House, the delicate stucco and mirror works, and the three high Badgirs (wind catchers), have made this house an enchanting spot for photographers. The water for the house is provided from two Qanats (Persian underground water canals) which pass under the basement of the house. In the middle of the courtyard, a lovely pool with its fountains make an adorable atmosphere and provides more humidity in a dry area like Kashan. The reception hall of Tabatabai House is the most adorned part of the complex which is decorated with stucco carvings, stained glassed windows, and frescos that are done by skillful painters of Kashan in the 19th century. 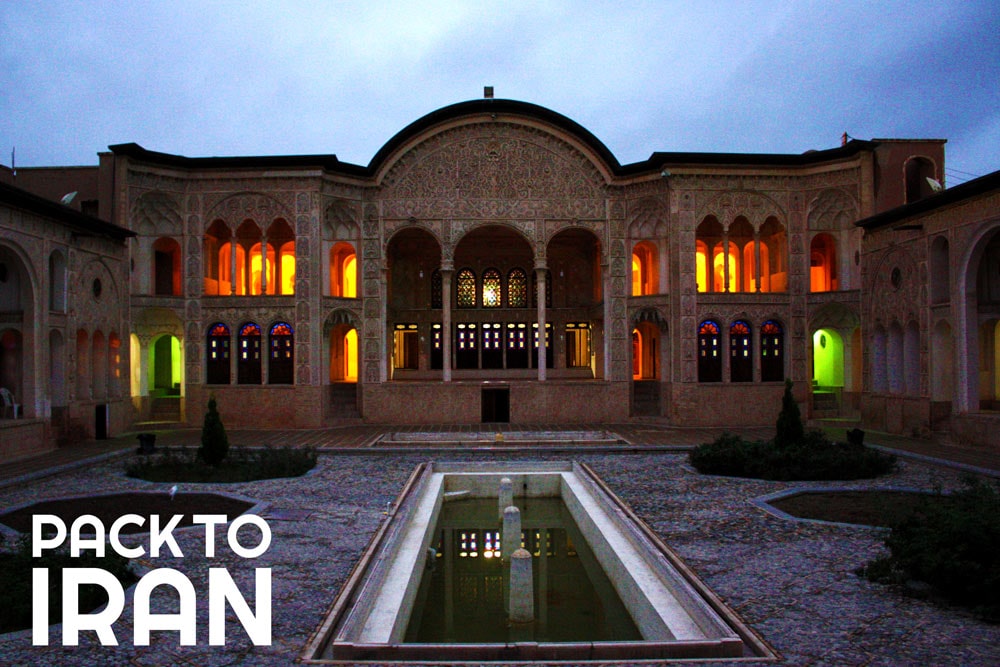 This magnificent house was built by Mehdi Borujerdi a very affluent merchant of Kashan in the 19th century. There is a famous story about the construction of this house which says that Mr. Borujerdi fell in love with the daughter of Jafar Tabatabaei, a very wealthy carpet merchant of Kashan. Mr.Tabatabaei set a circumstance for the marriage and asked the suitor to construct a residential edifice as pretty as his own house (Tabatabai House), so he would agree with the marriage. Mr. Bourjerdi accepted the condition, therefore, the Borujerdi House which was one of the most luxurious houses of that time was a gift for the bride. This construction is elaborately built by the use of simple local materials. The construction of the house started in 1857 and it took 18 years to be completed. It’s been said that lots of craftsmen led by the main architect master Ali Maryam, cooperated to build a true masterpiece of Persian residential architecture. Following the traditional Iranian architecture, the house consists of two main sections; Andarooni or the interior and Biruni or the exterior area. The Biruni, which was a place for receiving guests, was designed and adorned in such a fantastic way to impress all the guests and visitors but in contrast, the Andarooni was designed simply with little decoration just to provide a comfortable area for the family and the households.

The main entrance of the Borujerdi House is an octagonal anteroom that has several skylights in the ceiling, and two doors one opening to the interior section of the house and the other one leading to the exterior section through a curved corridor. After passing the corridor you’ll be surprised by a lush rectangular courtyard and a fountain pool in the center of the yard, surrounded by trees and flowerbeds. On the other side of the courtyard are the main reception hall with its fascinating domed roof and its special Badgirs which is undoubtedly the most gorgeous part of the Borujerdi house. The charming decoration and ornaments of the house include stucco, glass and mirror work, and frescos. You can see the stucco carvings in the shapes of fruits, flowers, and frescos by the expert painters of that time. The reception hall light is provided by latticed triangular windows around the dome’s sides, and the inner part of the dome is ornamented by muqarnas or hanging cornices. 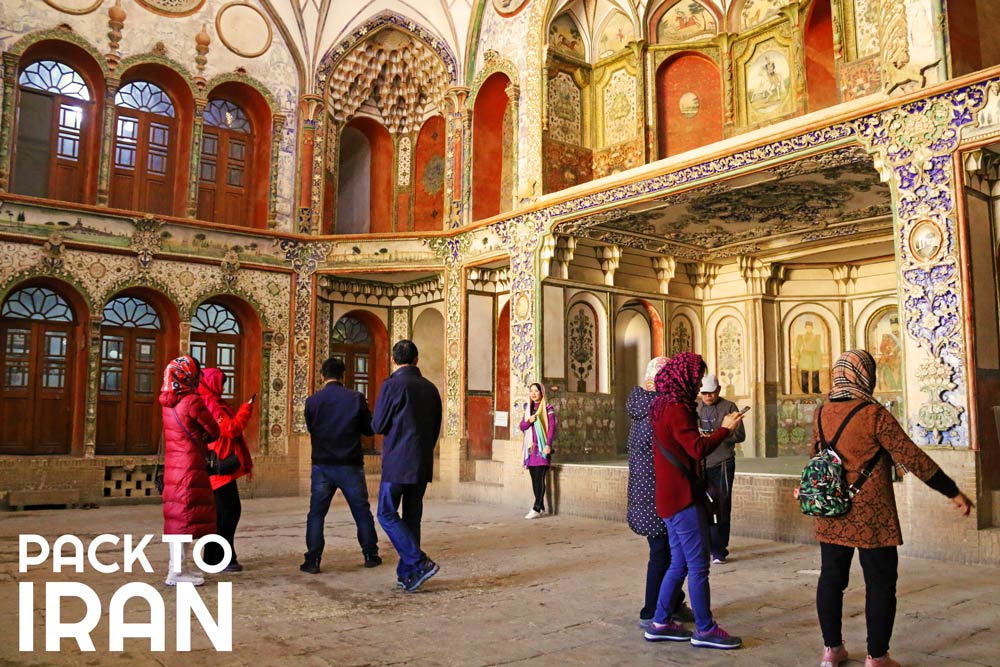 The Abbasian Historical House is another masterpiece of Iranian architecture located in the city of Kashan, however, it is really hard to use the word “house” for this impressive structure! This mansion is built in a 7000 square meter area with five floors and six courtyards and chambers by the order of a notable cleric and teacher of Kashan, Mr. Abbasi in 1823. The Abbasian House took almost 20 years to be finished. The main yard of the house was contributed to Mr. Abbasi’s religious classes. Like other historical houses in Kashan, this house also contains two sections, the Andarooni (interior section) and the Birooni (exterior section). The highlight of this historical house is the main reception hall which is called “Shahneshin” (alcove). this room contains five doors with a fabulous ceiling adorned by mosaics. Standing at the center of this room, you may feel like standing right beneath the sky. Wind towers and pool and fountains also were used to cool down the house temperature during the hot summers of Kashan.

The Ameriha House is the largest historical house of Kashan which was constructed for Mr. Ameri who used to be the governor of Kashan during the Zand dynasty in the 18th century. Sadly, the house was once destroyed because of an earthquake, but it was reconstructed in the 19th century. The Ameriha House contains 85 rooms, seven yards, and two bathhouses. Tile works, stucco carving, stained glasses windows, frescos, and mirrors are used to adorn this spectacular house. Since Ameriha house was made for the governor of Kashan, its wind towers are the tallest ones among other wind towers of the historical houses of Kashan. As a wonderful sample of Persian architecture, Ameriha house has now being hand-restored to become an exquisite boutique hotel in Kashan, located in the heart of the historical neighborhood of the city. By a mixture of fully decorated rooms in traditional style, the Saraye Ameriha Boutique Hotel will truly be an oasis of history and beauty in the Central Desert of Iran.