The highest appearance of Islamic architecture can be found in religious buildings such as mosques and madrasahs and Iran is one of the richest countries in term of Islamic architecture in world where the rulers commissioned the construction of mosques and madrasahs and knowledgeable architects and artists started to create some fabulous masterpieces of Islamic architecture based on the local techniques, styles and materials since the entrance of Islam into this country in 7th century. Islamic architecture of Iran reached to its summit and golden period during the reign of the King Abbas I (Shah Abbas) who ruled Iran since 1588 to 1629 during the Safavid Dynasty, a new period in which the rich, astonishingly colored and imaginative details developed by his ancestors became unified into significant ensembles of enormous scale and splendor.

The city of Isfahan was designated as the capital of Iran by Shah Abbas I and it was reconditioned with so many new mosques, palaces, bridges, caravanserais and gardens to the extent that Isfahan became one of the most beautiful cities of the world according to the western travel writers. Even today, Isfahan is one of the most amazing cities of Iran and one a great city for visiting the most fabulous mosques in Iran and discovering about Islamic architecture and art for the art lovers and travelers who seek the soul of Persia. 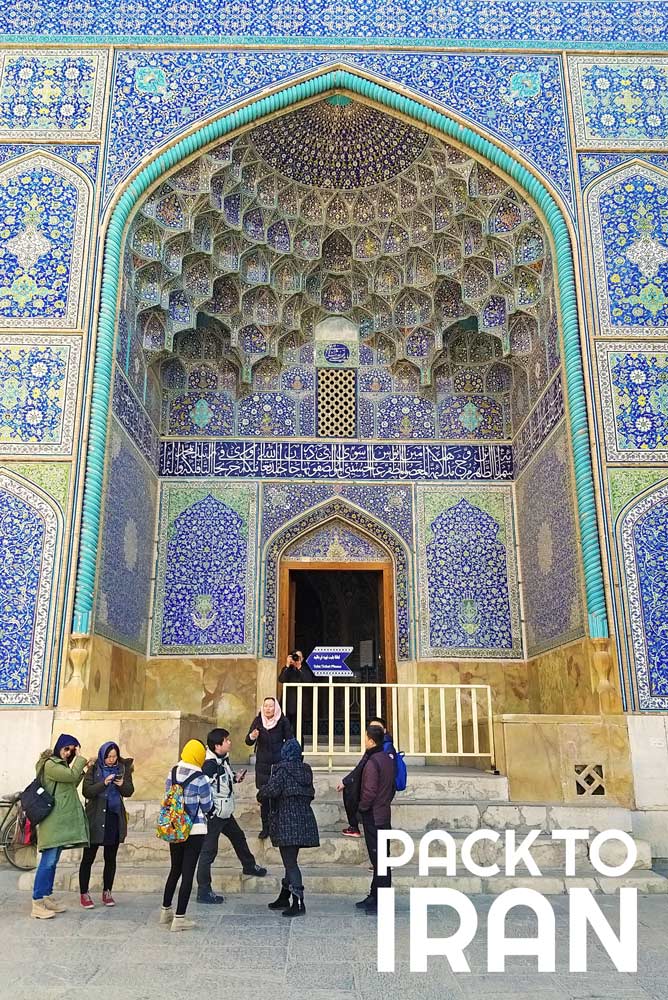 Among all the monuments located in the charming city of Isfahan, the sheikh Lotfollah Mosque shines like a gem. The construction of this small yet enchantingly beautiful mosque was started in 1602 by the order of Shah Abbas I. The mosque is located on the eastern side of Naghsh-e Jahan square opposite to the Ali Qapu Palace and it was built in honor of Shah Abbas’s saintly father- in – law, Sheikh Lotfollah and it was served as a private chapel for the women of the Shah’s Harem. As being located on the east, an adjustment was necessary to orient the qibla wall toward Mecca.  A diversion of forty-five degrees from the north-south axis of Maydan.  Effected by an ingenious and inconspicuous turn in the corridor, invisible on the exterior because only the dome appears above the wall that lines the whole Maydan.  The total area of the mosque is 1,324 sq.m (14,245 sq. ft). The dome is 32m (105 ft) high and 12 m (42 ft) in diameter. The dome rests on a drum with sixteen regularly spaced windows which, together with a huge window in the northern wall, trap the maximum amount of natural light into the interior space. The amazing fact about the dome is that it is unusual both in color and form. The form is squat and the dominant color and surface of the tile work is not the usual glittering blue which can be seen in the other mosques of the same period, but an unglazed café- au- lait. 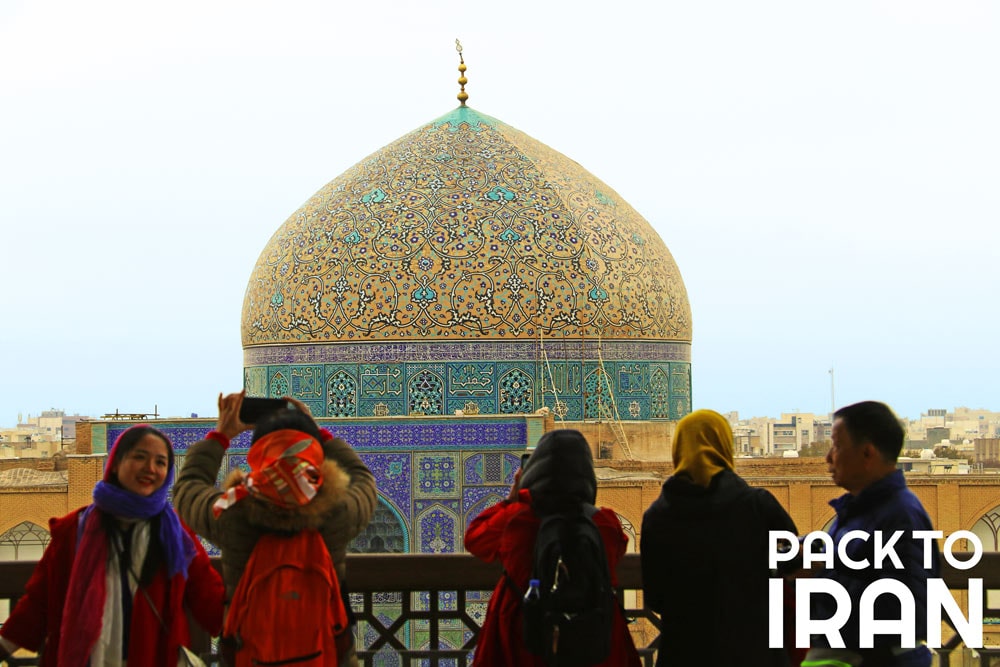 The arabesques are glazed white, turquoise and deep blue, moving in exalted curves around the buff ground, and there is a good deal of blue in the drum of the dome.  glazed and unglazed tiles have been used very skillfully, that the contrast between them gives a variable glitter to the surface as the sunlight strikes it.  The inner part of the dome is also rich in decoration. The golden sun medallion at the apex of the dome emits a fantastic design which is still a great inspiration in designing traditional textiles and rugs. 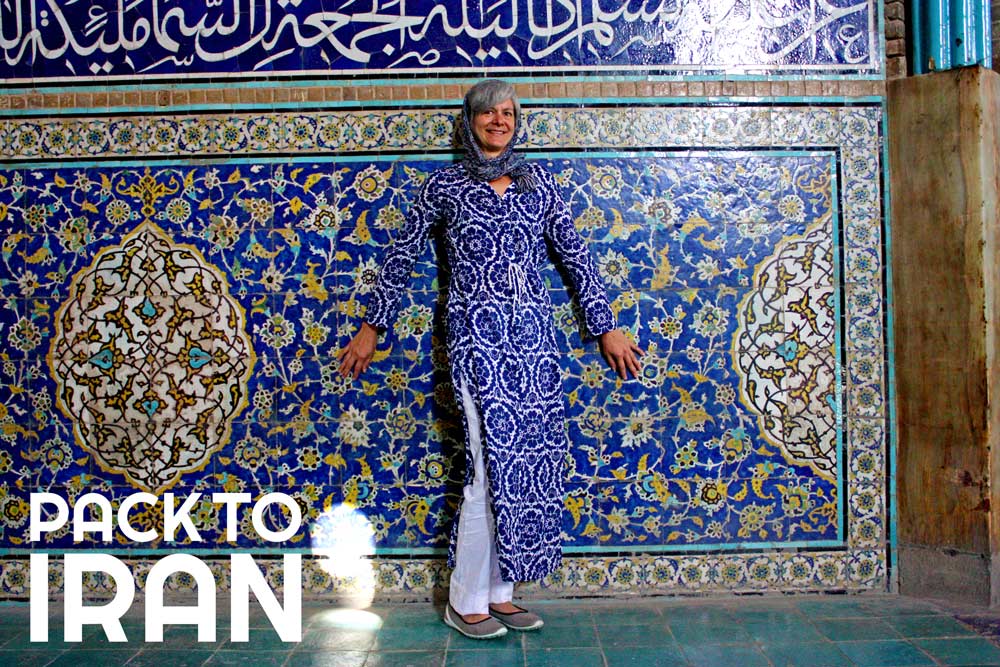 The chamber of the mosque marks the final perfection of the dome-on-square plan. The tile and mosaic decoration of the mosque is really spectacular. A deep blue color predominates in the tile work, however an unusual amount of buff has created an eye-catching color combination, and as in the exterior, there is a flickering contrast between the glazed and unglazed tiles. The calligraphies of the mosque which is the work of Ali Reza the greatest calligrapher of the day, is among the top calligraphies in Islamic architecture.The texts are white on midnight blue background. The Mehrab of the mosque (prayer niche in mosques) is adorned with Moqarnas (hanging cornices) and features an inscription showing the name of the architect called Mohammad Reza son of Ostad Hossein. This prayer niche is an outstanding example of faience mosaic decoration. So totally the whole structure’s incredibly rich decoration makes it uncompetitive among all the mosques in Iran. As Robert Byron - British travel writer- says, Versailles, The porcelain rooms at Schonbrunn palace, the Doge’s Palace, St Peter’s, are rich in decoration but Sheikh Lotfollah mosque exceeds them all in decoration. The mosque has also a vaulted basement which was used as the winter prayer hall. Sheikh lotfollah is a truly spiritual mosque that no one in a receptive or thoughtful mood can enter without a shock and impossible to leave this monument unaffected. 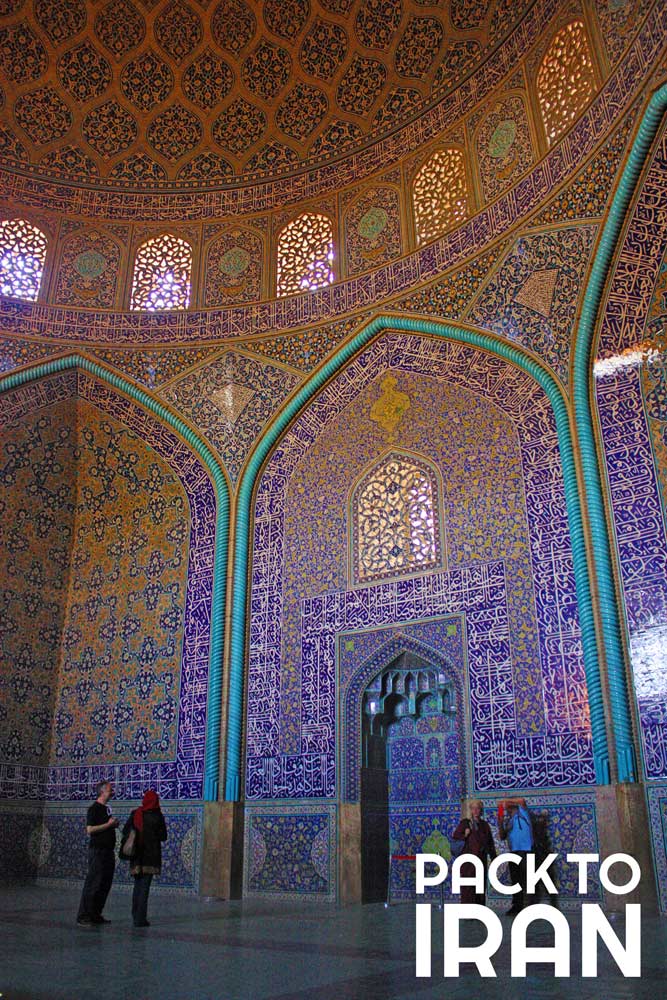 Take the Isfahan City Tour of PackToIran and explore the mind-blowing beauties of this city by visiting its main touristic attractions lincluding the Naqsh-e Jahan Square, the Ali Qapu Palace, the Sheikh Lotfollah Mosque and Imam Mosque, the Chehel Sotun Palace and the Jame Mosque of Isfahan.