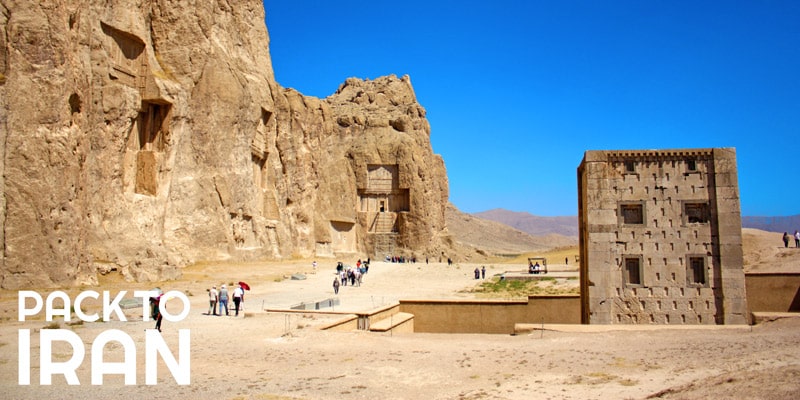 All you need to know about Naqsh-e Rostam (Necropolis)

10 Kilometers far from Persepolis, stands Naqsh-e Rostam, another mysterious ancient site of Iran. Naqsh-e Rostam is a complex of four Achaemenid tombs, seven Sasanid rock reliefs, one Elamite rock relief, and the strange cube-shaped construction called “Ka'ba-ye Zartosht”. Hossein Kuh mountain, where all of the tombs and rock reliefs are carved in, provides a natural screen that has been used by different Persian Kingdoms to display their glory.

The name Naqsh-e Rostam is not a very old name and can go back to the 19th century and can be translated as the pictures of Rostam. Rostam is the main hero and warrior in the book “Shahnameh”, a Persian epic poem from 10th century written by Ferdowsi. This name was probably derived from the Sasanid rock reliefs of Naqsh-e Rostam depicting battle scenes. The name that Greeks gave to this sacred place was “Necropolis” meaning city of the dead, mainly because it’s the burial place of four great Achaemenid kings. This site is one of the most significant ancient attractions of Iran that you should visit. 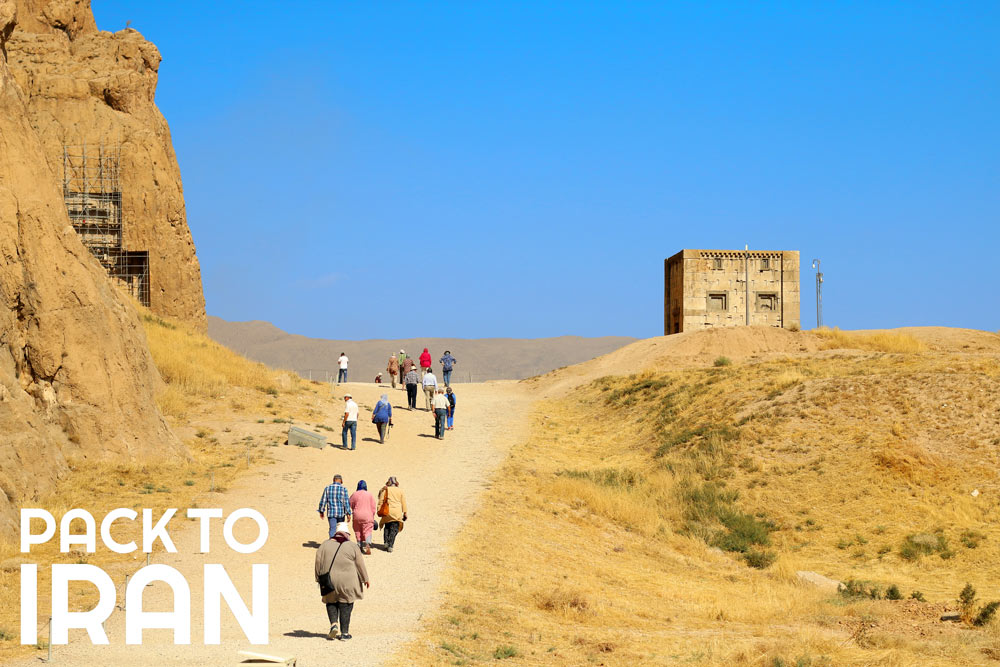 When you enter Naqsh-e Rostam, the first things that catch your eyes is the four huge cross-shaped Achaemenid tombs carved high in the mountain. From right to left, there are tombs of Xerxes I, Dariush the Great, Artaxerxes I, and Dariush II. Only the tomb of Dariush the great has inscriptions where the name of the buried king is mentioned and the other three tombs have been identified based on historical and archeological evidence. The tombs of Achaemenid kings are located in different places. The tomb of Cyrus the Great, the founder of the Achaemenid empire (550 BC – 330 BC) is located at Pasargadae, same as his son Cambyses. The next four kings are buried in Naghsh-e Rostam, and since there was no room left for the other succeeding Achaemenid kings, they built their tombs in the mountain overlooking Persepolis.

The four tombs are visually identical. They are gigantic crosses carved high in the mountain face to be inaccessible, although robbers found their way to the treasures of the tombs over time. The genius beauty of these tombs is that they were built and decorated like the portal of the palaces in Persepolis, the ceremonial capital of their great empire. The whole façade is carved in the mountain like a palace with four columns and an entrance door to the palace which here is like a door to the other world. There are one or three rooms behind this door, where the King is buried in a stone casket. On the upper part of the cross which is the rooftop of the palace-like decoration of the middle part, are some rock reliefs portraying the king worshiping god in front of a burning fire. The king is depicted with a bow in one hand as the symbol of power and the other hand lifted towards god as a sign of oath. Above the king, there is the wingman symbol known as Faravahar or Fravashi, a representation of the royal fortune. The king is standing on a big throne being carried by 28 men, each one representing one of the 28 subject nations under the control of the Achaemenid empire. The names of these 28 subject nations are mentioned in the inscriptions on the tomb of King Dariush I. 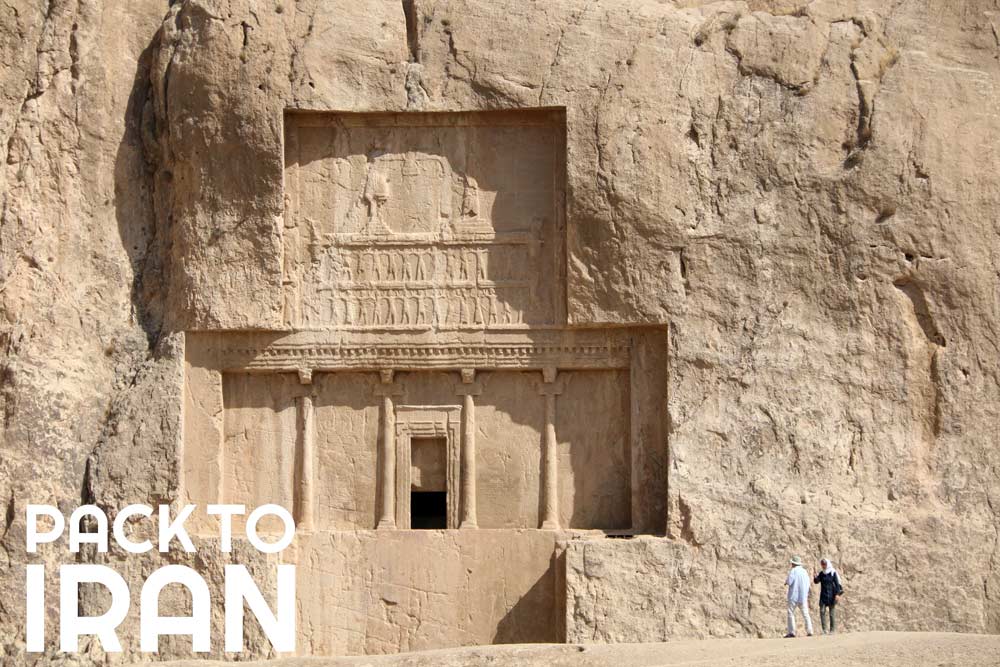 Naqsh-e Rostam attained even more important during the Sasanid empire (224 – 651) and is the largest collection of Sasanid rock reliefs in Iran with seven reliefs. These bas reliefs were located near the capital of Sasanids and were like billboards to show their glory with subjects like investiture, battles, and victories.

In the investiture reliefs of Iran, usually, the king is receiving a decorated ring from a person that can be Ahuramazda (The Zoroastrian god), a person from the royal family, or a military officer. The Investiture of Narses relief is unique among all because, in this scene, king Narses is receiving the kingdom ring from a woman. There are two main theories about this lady. Either she is Anahita, the goddess of water in ancient Iran or she is a lady of royal consort. The king is portrayed with all royal magnificence and to show his majesty, even more, his crown extrudes the relief frame, something that is seen in most Sasanid bas reliefs. 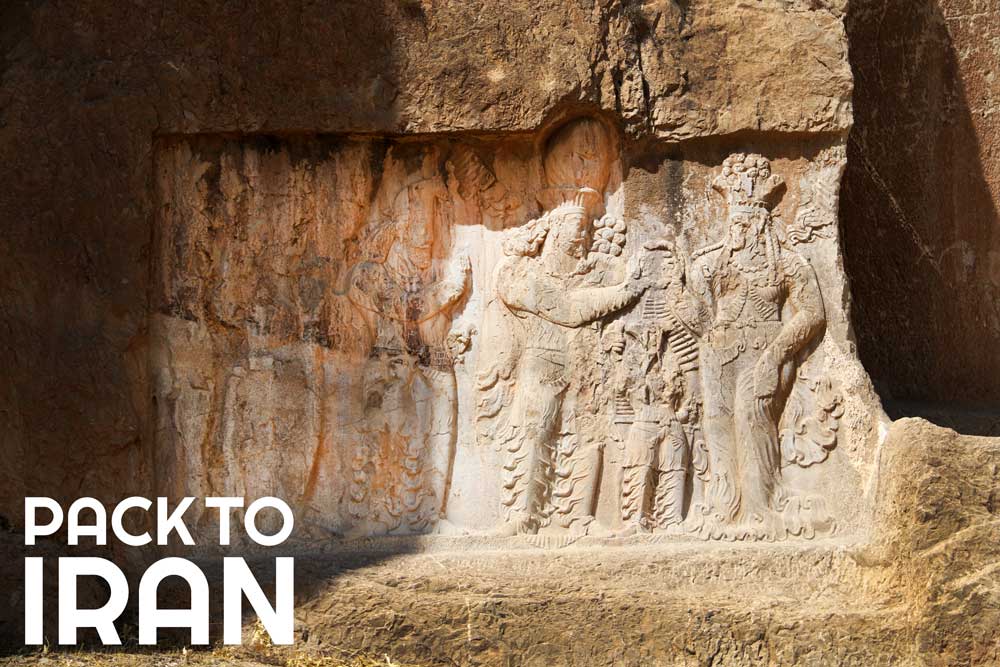 This is a double relief portraying 2 battle scenes, one placed above the other one and separated by a line. The upper one shows the battle of King Bahram II who is shown by eagle wings on his crown as a symbol of victory over his Roman enemy. The lower relief also shows a battle of King Bahram III with his enemies in a similar style as the upper one. These two reliefs are good documents about the military equipment of the Sasanids. 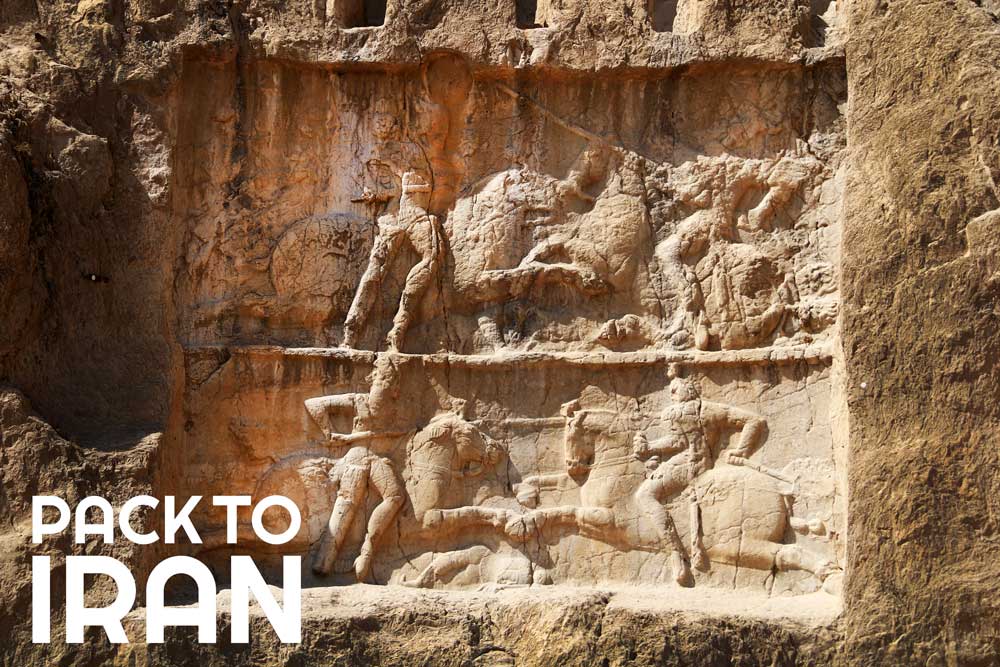 3 . The victory relief of King Shapour I over Roman emperors

This relief, which is one of the most beautiful and famous Sasanid reliefs in Iran, shows the victory of two Roman emperors, Valerian and Philip the Arab. King Shapour I was the second king of the Sasanid empire, founded by his father Ardeshir in 224 AD. Shapour I had few wars with Roman emperors during his kingdom and most of them were victorious for him. There are many rock reliefs in Iran portraying these victories but this one that is located in Naqsh-e Rostam is considered the most spectacular one in terms of carving art, scale, and delicacy. In this relief, king Shapour I is pictured with a beautiful dress and war weapons, sitting on a horse in all glory, and in front of him, two Roman emperors are begging for mercy. Valerian is standing in front of the king with his hands in the hand of king Shapour, and Philip the Arab is shown kneeling in front of the Persian king. They are both shown together in this relief although king Shapour defeated them in two different wars. Behind Shapour there is the portrait of Kartir, the Zoroastrian priest who was a very influential person in the court of five Sasanid kings. This portrait is accompanied by an inscription explaining Kartir. 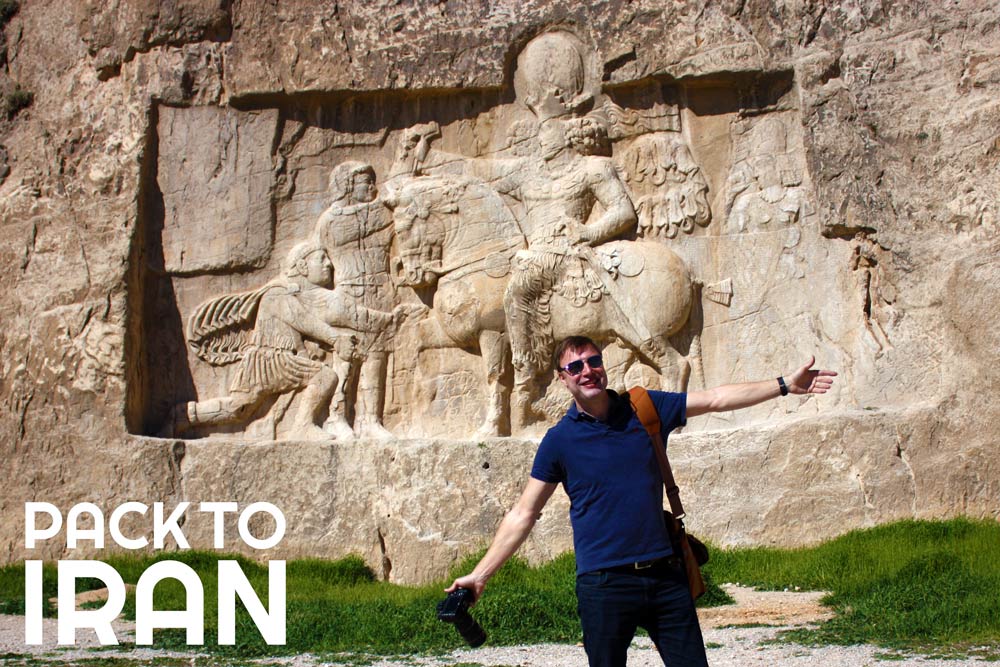 Another double relief picturing two scenes although not much is left of the upper one, probably eroded by water streams over time. Careful observations by archaeologists reveal that it originally was a relief showing a king sitting on a throne with royals around him. The lower relief which is in a much better condition shows the victory of king Hormoz in a battle over his enemy who is probably the governor of Georgia. 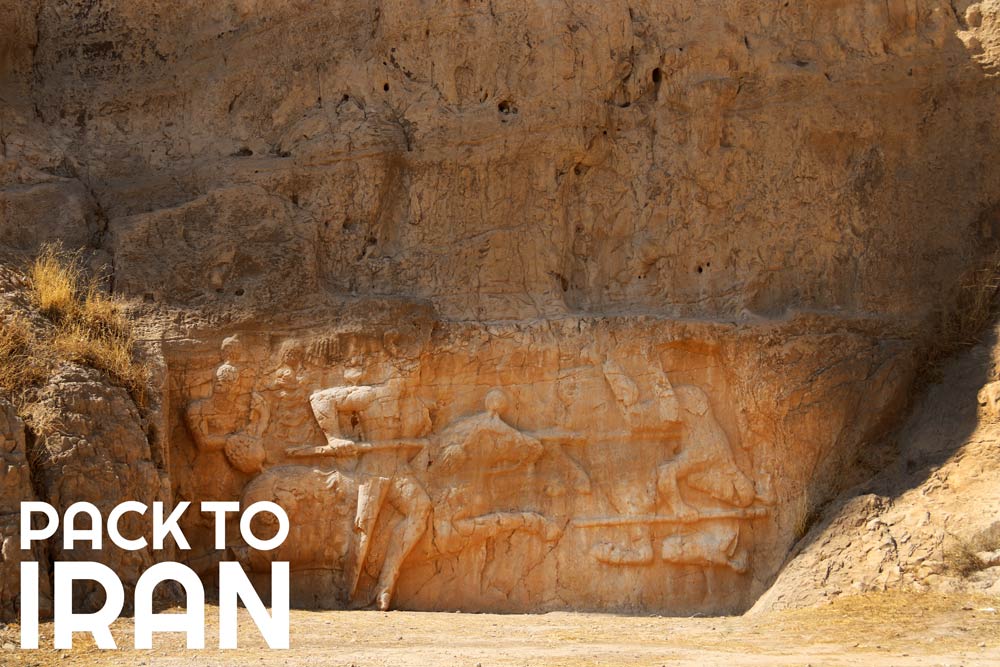 This battle scene is largely eroded so historians can not identify the king with certainty, although many believe he is Shapour II. These identifications are usually stemmed from the shape of the crown or headgear of the Sasanid kings. The Sasanid king is shown on a warhorse attacking his enemy who has a Roman helmet with a broken spear in his hand. The relief is 7.6 m long and 3 m high. 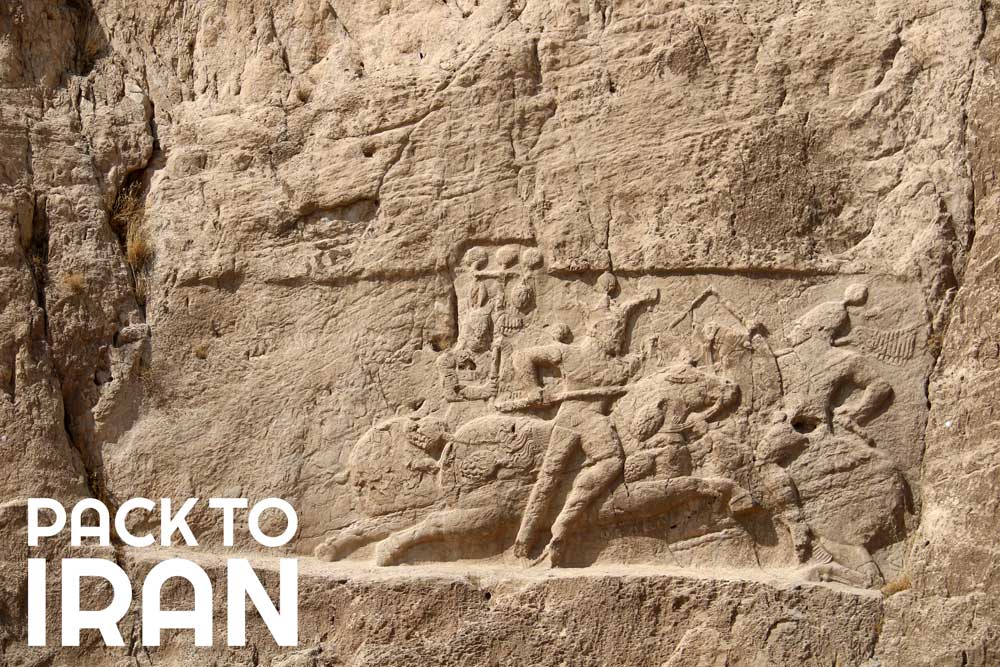 6 . The relief of king Bahram II and the Elamite one

This is a strange and unique relief because one part of it was carved during the reign of King Bahram II (290 AD) and the other part was carved during the Elamite empire (1st millennium BC). This shows that Naqsh-e Rostam was a sacred important place for Iranians since the time of Elamites (3200 BC – 539 BC). To do the Sasanid relief, king Bahram makes a strange decision to carve it over the old Elamite one, so to do so, Sasanid artists erased most of the original one. The Sasanid relief portrays king Bahram II surrounded by members of his family on one side and the courtiers on the other side. Among all the people shown in this relief, only the king is portrayed in the full-length figure while the others are half-length figures and this makes this relief even stranger. Of the original Elamite relief, the outline is barely visible, so historians get ideas of it by comparing it with the similar Elamite reliefs in Iran. The relief used to portray a king and a queen, sitting on snake-like thrones while surrounded by people. Among the remains of the Elamite relief, a person standing at the right side of the relief is in a good condition in comparison to other parts and looks untouched, yet the reason this part was not erased by Sasanids is unknown. 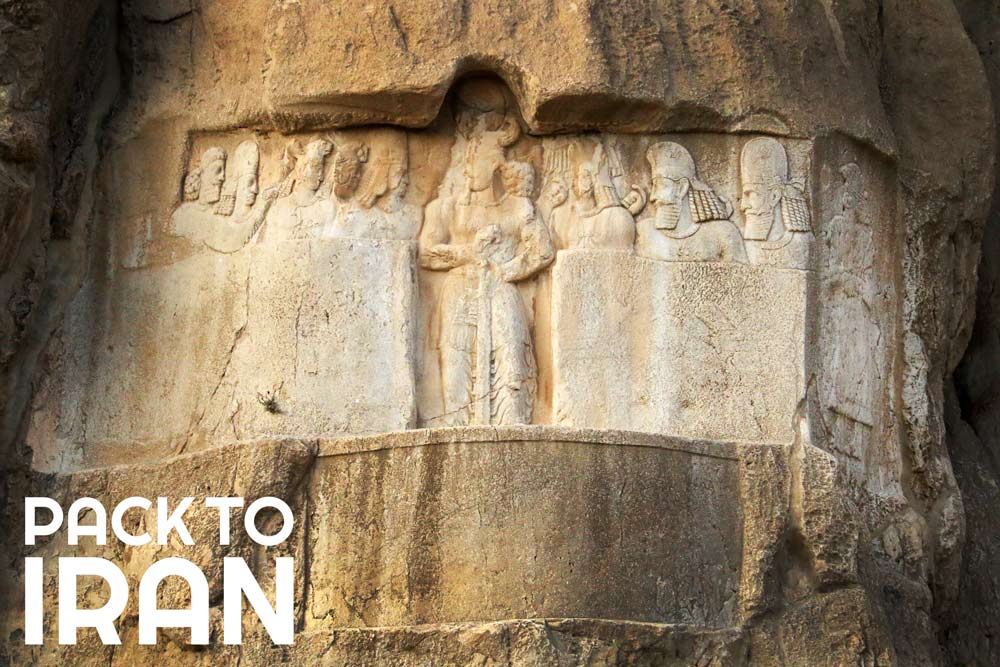 7 . The investiture of king Ardeshir

King Ardeshir is the founder of the Sasanid empire, an empire that ruled an important part of the ancient world for more than 4 centuries. This relief portrays the investiture of king Ardeshir beautifully. There are 2 figures on horses facing each symmetrically in the frame. The king is on the left side, stretching his hand to receive the decorated ring of royal power from Ahuramazda, the Zoroastrian god who is on the right side. There are inscriptions written on the chests of the two handsomely decorated horses, in 3 different languages telling the story of the victory of King Ardeshir over the last king of Parthians (247 BC to 224 AD) whose dead body is underneath the king’s horse. On the other side, underneath the god’s horse, lies another dead body which is a man with snakes as his hair as a representation of the evil Ahriman. This relief is among the most beautiful Sasanid reliefs of Iran. 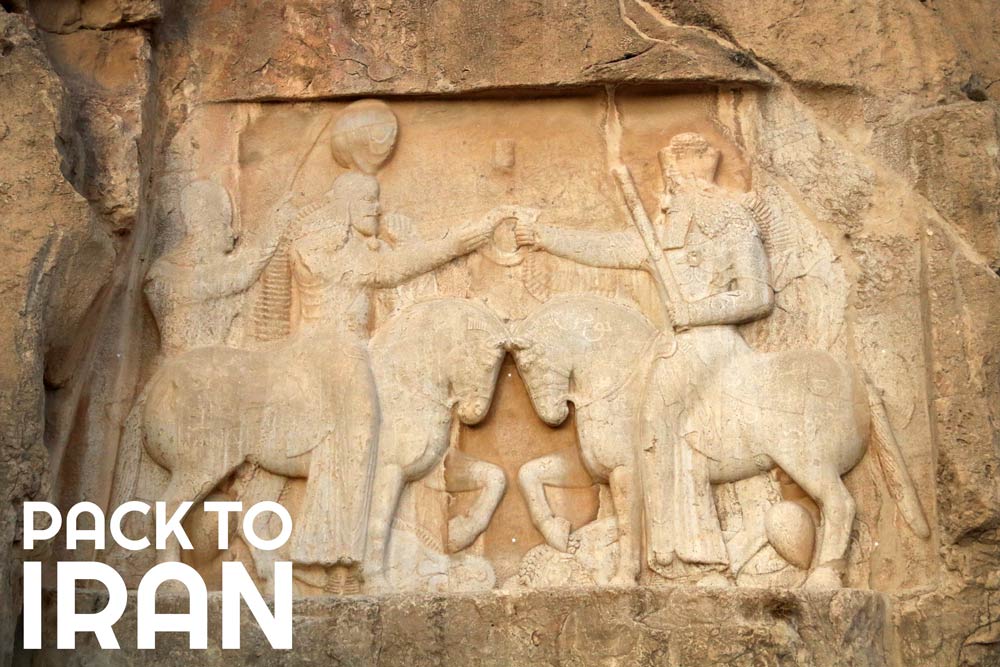 Naqsh-e Rostam is a mysterious place with monuments from different kingdoms, but Ka'ba-ye Zartosht can be the most mysterious one among all. The original name of this 14 m high cube-shaped building is unknown but today it is called Ka'ba-ye Zartosht meaning the cube of Zoroaster and it comes from a belief by the locals that it was the home to Zoroaster the prophet. Besides the name, the function of the building is also unknown however there are many archeological speculations. Some believe that it was a fire temple, but it’s a closed chamber with no ventilation. The other theory is that it was a placed use to keep the mummified body of the kings before placing them inside the tombs, however, the difficulty of access to this building invalidates the theory. There is a similar structure in Pasargadae which is believed to be the tomb of Cambyses, the son of Cyrus and the second king of the Achaemenid empire, and it brings another theory that the Ka'ba-ye Zartosht in Naqsh-e Rostam is the tomb of either the son of king Dariush or his father’s. 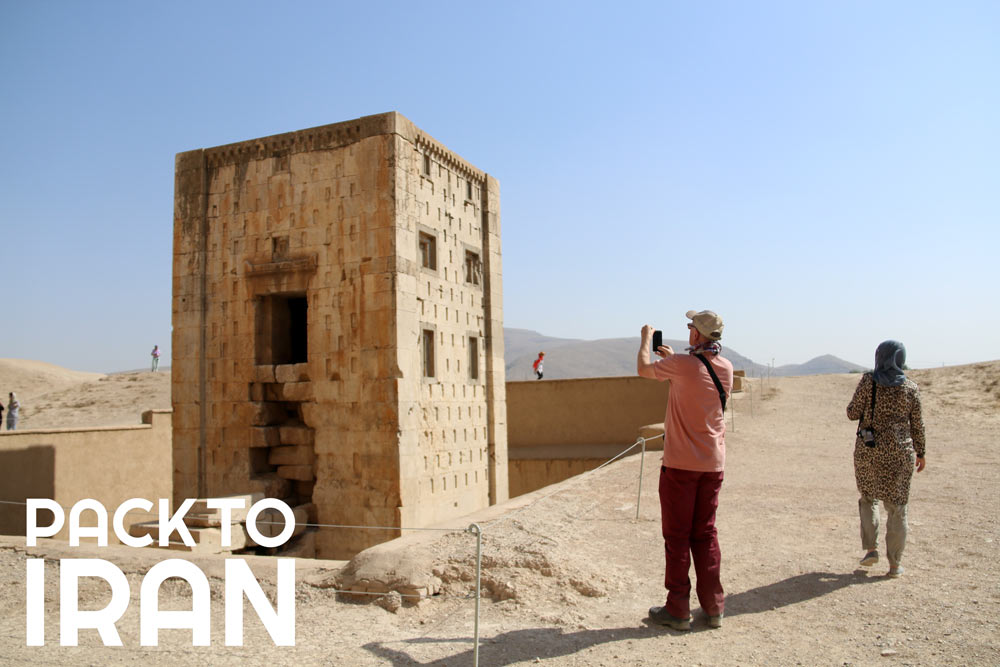 - There are no facilities like cafes inside Naqsh-e Rostam (there are facilities outside the fenced area), so if you are visiting during the hot season, bring an umbrella and water

- After visiting Ka'ba-ye Zartosht some visitors miss the two other Sasanid reliefs. There are still reliefs number 6 and 7 to visit. 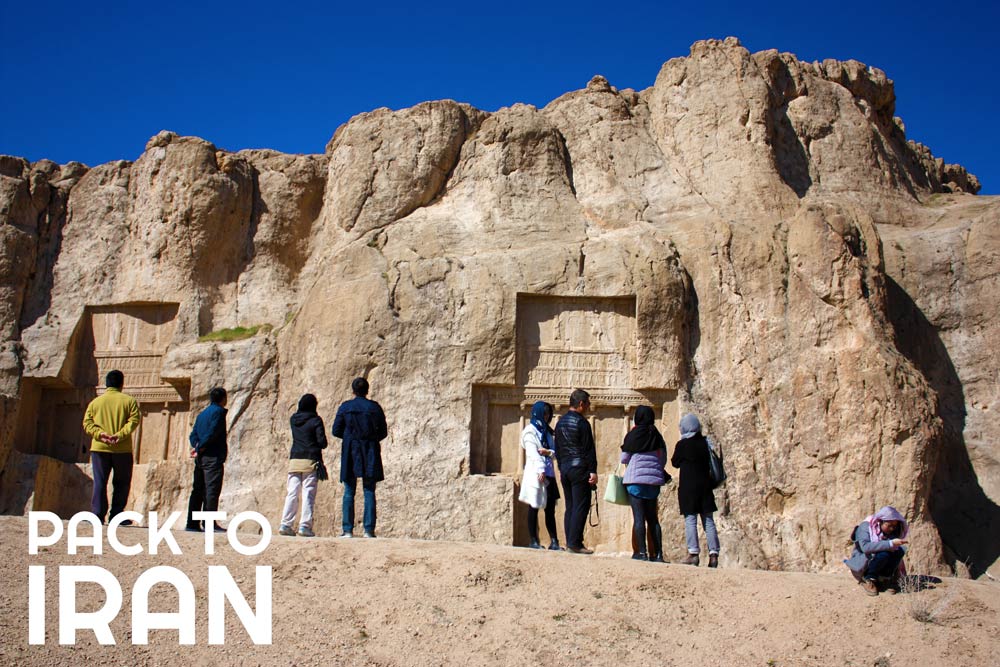