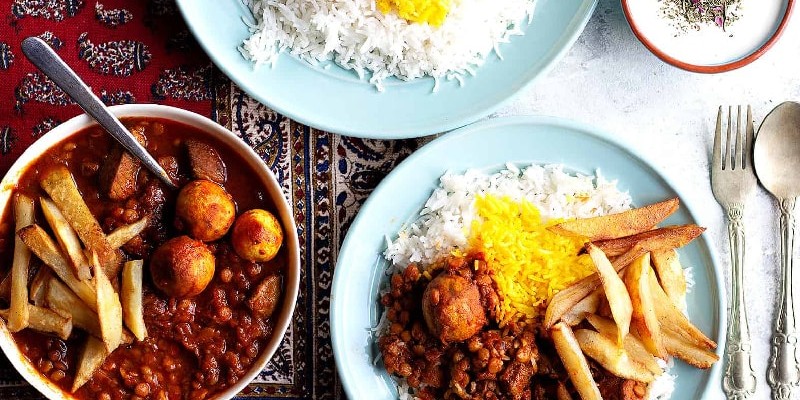 Iran is going to be the new travel destination of the world. One of the oldest countries in human history which is yet still an undiscovered land for many. There are over one million historical sites in Iran, 24 UNESCO world heritage sites, different ethnic groups with rich cultural roots, kind welcoming locals, four-season nature from ski resorts to deserts. So, this country has a lot to offer to dear visitors and among them is Persian food. Everyone knows that foods are a big, important, and pleasant part of each trip and Iran is an awesome place for food lovers, gastronomes, and people who love tasting new cuisines, as this country has amazing culinary scenes and diverse food cultures. So, in this blog, the PackToIran team wants to introduce to you the best Persian foods to try in Iran. Below is the list of popular Persian foods that you can find in most of the restaurants in Iran.

It is believed that Kebabs have their origin in the Middle East and since you are now traveling in the Middle East, so you have to try Kebabs of Iran not only once but few times because Iranians cook different types of Kebabs in Iran. Here is a list of the most popular ones

Koobideh can be the most popular type of Kebab for Iranians. It is a minced meat Kebab mixed with onion and spices. To make it, the cooks in restaurants use lamb meat, beef, or even chicken but it is usually a mix of lamb and beef.

This is grilled chicken kebab that is marinated in different ways (Saffron, yogurt, vegetables…). You can order Joojeh Kebab with or without bones.

If you are a lamb meat lover, you have to try this. Barg is usually lamb sirloin and in some restaurants beef tenderloin.

Also called “Chenjeh”, it is another good choice for meat lovers. It is lamb or beef fillet but the main difference between Kenjeh and Barg is that Barg is one big relatively thin piece of meat and Kenjeh is small pieces of meat (usually 5 – 10 pieces)

Want to try both chicken and lamb? So, try Bakhtiari which is a mix of both, including boneless saffron chicken and pieces of lamb.

Also known as Shish kebab is another very popular Iranian Kebab, which is made of lamb ribs.

Sultani Kebab is the mixture of Barg and Koobideh Kebab and is a great choice for the ones who want to try both.

Jigar or grilled liver kebab is very common in Iran and they are from either lamb or cow. In restaurants serving Jigar, you can also order grilled kidney or heart

Grilled seafood is a tasty kebab that is known to be healthier than other Iranian Kebabs. In most of the restaurants, you can order grilled fish (trout, fish from the Caspian Sea, or fish from the Persian Gulf) and also shrimp.

These were the most popular types of Kebabs that you can try in Iran. They are usually served with rice, Sumac and vegetable dressing (grilled tomato and pepper) or you can have them with bread.

Chelo means rice and Khoresh means stew. It is a very popular Iranian food that you can find in most of the restaurants in Iran. The ingredient of stews is different but it mainly includes cooked vegetables, meat and beans served with cooked saffron rice. Here is a list of the main stews that are among the best Persian foods that you should try in Iran:

This green stew is a very popular dish in Iran and has a special place in Iranians' food schedule. Ghormeh Sabzi is made with different herbs (parsley, coriander, fenugreek, leeks, dried lime), beans, and meat. The meat can be lamb or beef. 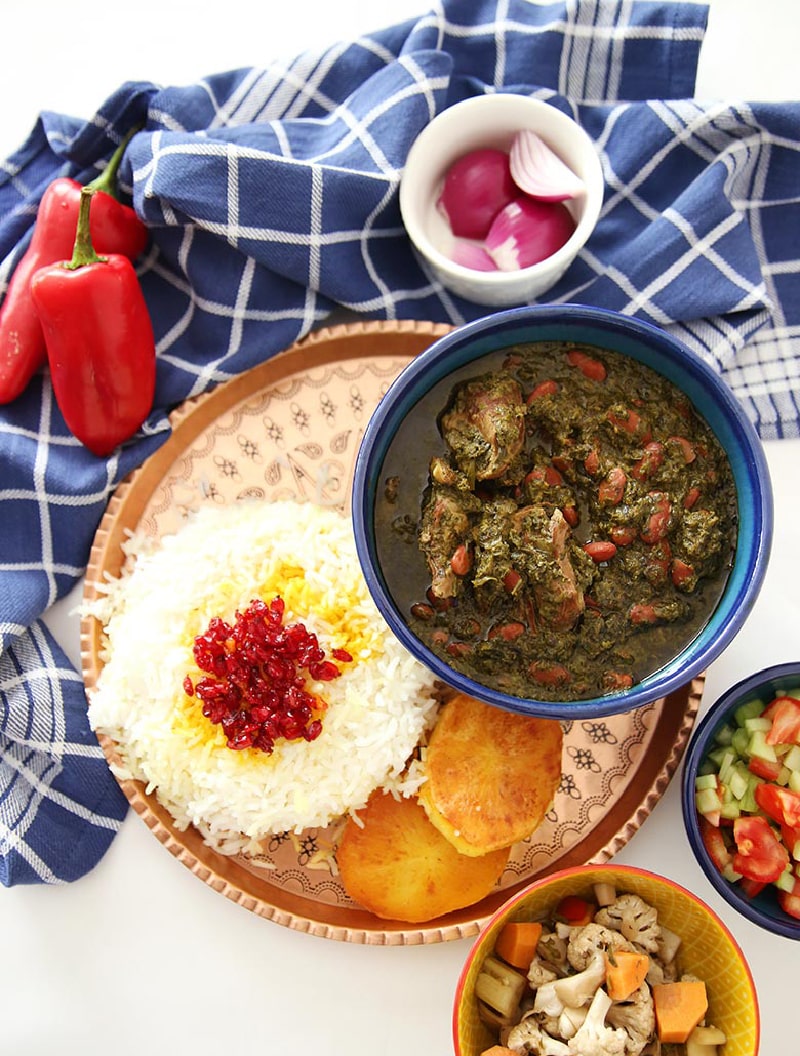 Fesenjan (Fesenjoon) is a very special Iranian stew that you have to try in Iran. The main ingredients of Fesenjan include pomegranate paste, walnut, spices, and meat (beef or chicken). Depending on the pomegranate paste type, it can be sweet, sour, or somewhere in between. Fesenjan is originally a food from Gilan, in the north of Iran. 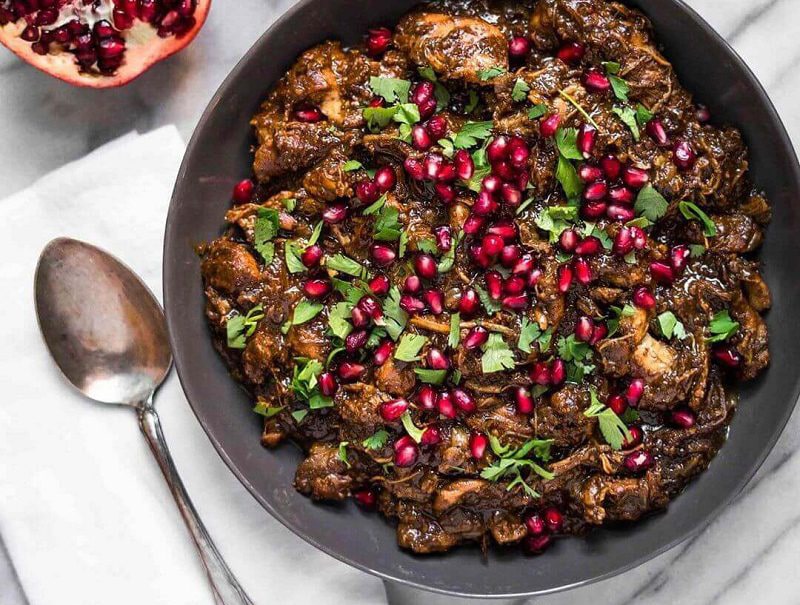 Another green stew made with celery and meat (lamb or beef). This stew is usually cooked without beans and is a portion of very healthy and light food.

Another special stew of Iran that comes from the southern cities near the Persian Gulf including Khuzestan Province, Bushehr, and Bandar Abbas, while it can be found in many restaurants all over Iran. The main ingredients are cooked herbs, lots of spices, tamarind, and of course fish or shrimp. If it is cooked with fish, it’s called “Ghalyeh Mahi” and if with shrimp, it’s called “Ghalyeh Meygoo”.

This stew can be sweet or sour. The main ingredients are Aloo (plum), tomato and meat (usually chicken but it can be lamb too)

Other popular Persian foods that you should try in Iran:

Tahchin is a beautiful and tasty rice cake with a yellow color coming from saffron. The main ingredients are Rice, saffron, yogurt, egg. Different types are filled differently but mainly with chicken, eggplant, or lamb. It is usually decorated with Zereshk (barberries), which is an important element in Iranian culinary. 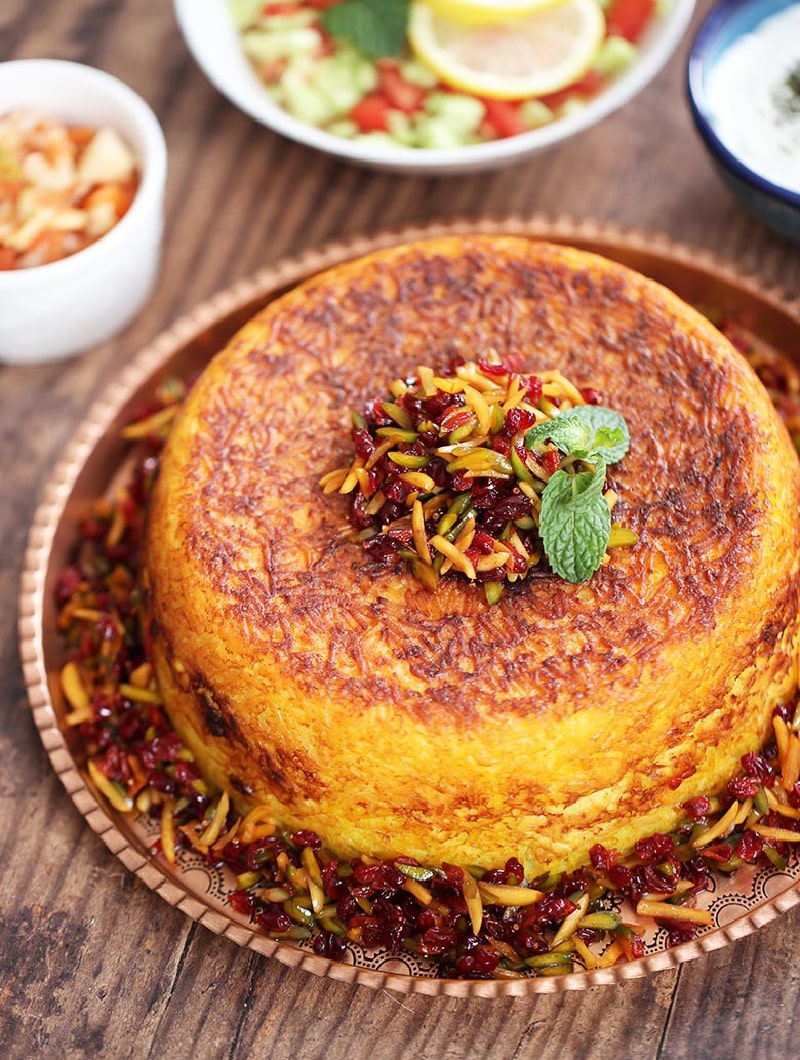 Also known as Abgoosht, this food is known as one of the national foods of Iran. The word Dizi comes from the special stone pots in which the food is cooked and served. The main ingredients of this Persian soup are lamb meat or beef, tomato, chickpeas, beans, potato, onion, and spice. The way this food is served is very interesting too. After being cooked, the soup is separated and poured into a bowl. The rest of the ingredients are mashed with a special tool inside the stone pot (dizi) and then poured into a plate. It is served with fresh onion, pickles, garlic, and fresh vegetables

Baghali Pollo is a very tasty Iranisn cuisine which is served on the first day of Nowruz by Iranians. This is made with fava, dill, rice and meat which can be lamb, beef chicken or even fish. Sometimes the meat is cooked separately and served as a stew beside the Baghali Polo and sometimes it is slow cooked inside the rice 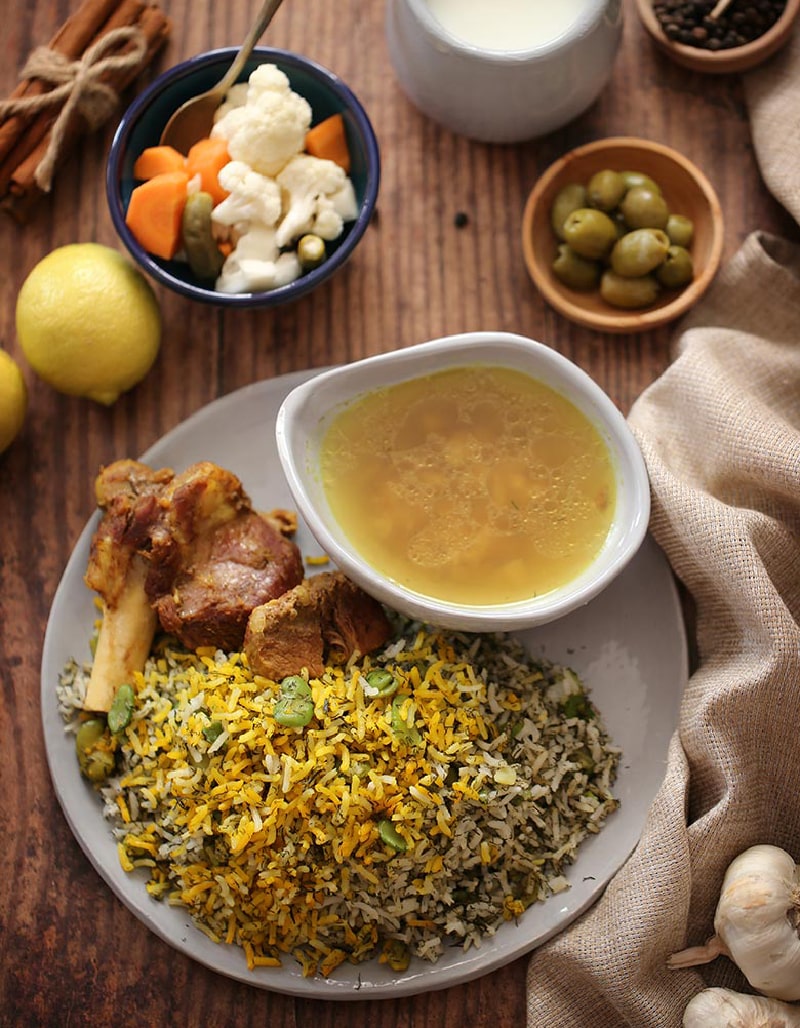 2 0
You can rate this post
Users Rated: 5 From 1 rates
Comments
Tags : Iran food 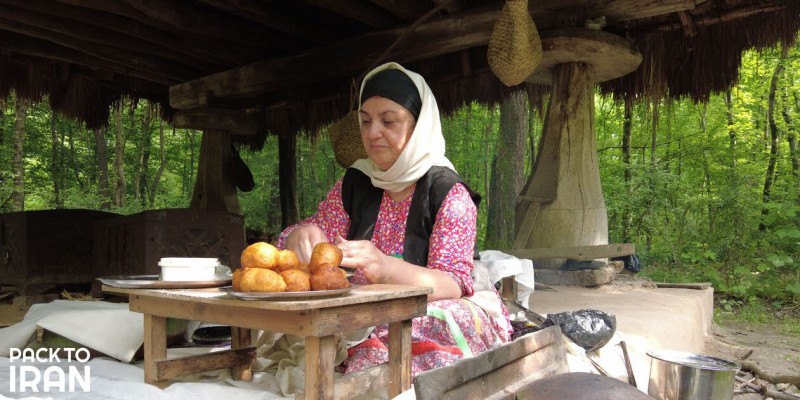 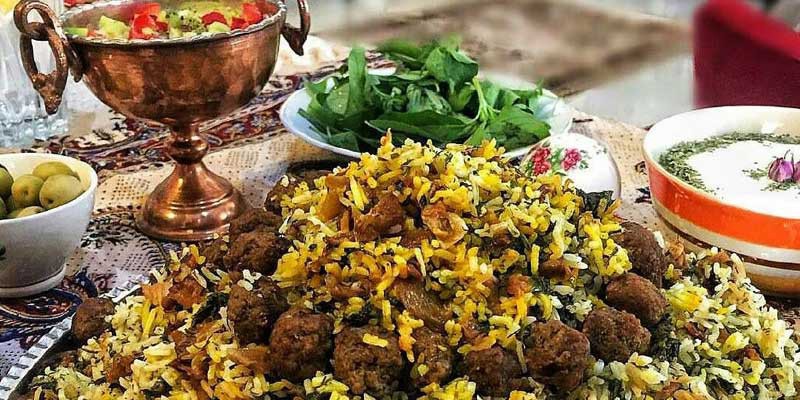 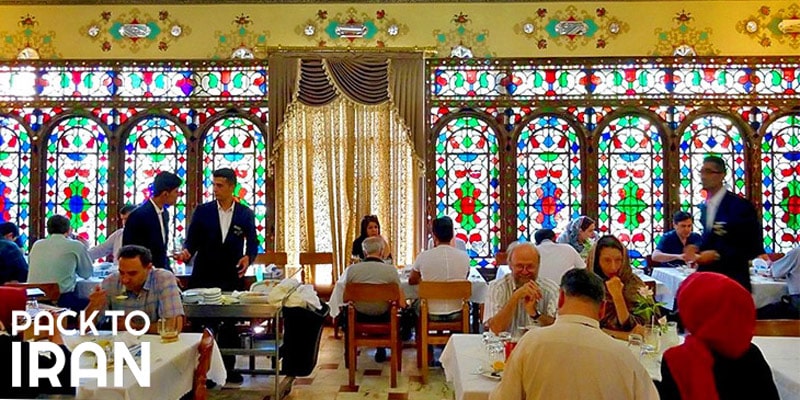