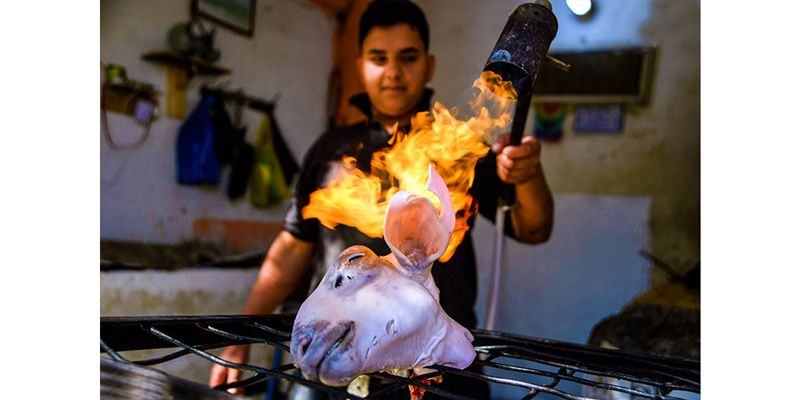 9 exotic foods to try in Iran!

For many, tasting unusual foods and getting familiar with new food cultures is a part of each travel. Iranian foods are varied and delicious and since this country has a diverse climate and culture, some Iranian foods are exotic and will surprise you.

For many, one of the greatest aspects of travelng is the food. With diversity in culture and geography, Iran has a lot of cuisines to offer as new experienses to food and gastronomy lovers. Most Iranian foods are made with common ingredients like meat, rice, and vegetables and they seem normal and tasty to foreign travelers. But as well as other parts of the world, there are some unusual and exotic foods to try in Iran that open a new window to the tasty world of Iranian foods and tastes. Below are the 9 exotic food to try in Iran.

Kalle Pache, which means head and leg(!), is a unique food served in Iran, Turkey, Caucasus, and the Middle East. This unusual food is made with different parts of the sheep’s body including the head, the four legs, meat, tongue, and brain, and is slow-cooked for about 10-12 hours until the meat is tender. Since this food is rich in cholesterol and oil, Iranians add some lemon or sour orange juice to this food and usually have it as breakfast to burn the calories during the day ahead. If you have heart disease or high blood pressure or cholesterol, you should eat Kalle Pache with more caution. Book Iran Culinary Tour for later!

Del, Jigar, Gholve are chopped pieces of the heart, liver, and kidney of sheep barbequed over fire. This nutritious food is usually found as a portion of tasty street food on the streets of downtown Tehran, in a small local restaurant in traditional bazaars, and even in restaurants on the roads.

Khoresht-e Mast (Yoghurt stew) is a traditional food served in Isfahan, especially in the wedding parties and formal ceremonies. In Persian culinary, Khoresht (stew) is usually served as a main dish with rice, but Isfahan’s Khoresht-e Mast is a sweet and cold dessert or side dish. This food is made with yogurt, sugar, saffron, and rose water. What makes Khoresht-e Mast an exotic food, is that it is added with tender lamb neck meat! Before serving, this food is topped with almond, pistachio, and barberry.

Beryani is totally different from the Indian food, Biryani. The Beryani, known as Isfahan traditional food is fried lamb meat mixed with onion, tumeric, cinnamon, pistachio and almond slice and is served on a piece of bread and has a soft and tender texture as the lamb meat is minced. This local food of Isfahan is very fatty and oily, and sounds like a good idea as the main course for people who burn so much calory during the day. The small traditional restaurant in the bazaar of Isfahan is the best place for having some original Beryani.

Doogh o Gooshfil is another traditional food of Isfahan, which is served as a snack. Gooshfil, literally meaning elephant’s ear(!), is a traditional pastry that is crispy and very sweet, while Doogh (Dough) is a sour-salty diary Iranian drink. At first, the contrast of this combination might seem weird, but after tasting most people fall in love with it, as the salty taste of Doogh balances the intense sweetness of the Gooshfil.

Ashpal is female fish eggs (roe), is eaten in the north of Iran especially in Rasht, known as the city of culinary. Ashpal-e Mahi (fish roe) is originally a type of caviar and is taken from the female fish in the Caspian Sea and is widely used in Gilaki cooking, as a condiment, side dish, or an ingredient in other dishes. In Gilaki restaurants, Ashpel is usually served as a side dish and tastes so salty.

This cold soup is the best choice for the hot summer days of Iran. This refreshing food is made with yogurt, chopped cucumber, herbs, raisins, chopped walnut, and is topped with dried rose petals. This cold soup is usually served with small pieces of crunchy thin bread, like Iranian Lavash bread.  To make this food more freshening and cool, some people add a piece of ice to their bowl! Ab Doogh Khiar is an amazing choice for vegetarians and people with diets, as it’s a light meal and has a lot of fresh vegetables.

Regag bread is a traditional bread in Arabic countries and Lebanon and it has a special place in the cuisine of Southern Iran, especially in Bandar Abbas, Qeshm Island, and Hormuz Island. Regag is a thin crepe-like bread that is made by the local women at home in their primitive handmade ovens. This type of bread is cooked in most villages of Iran, but what makes Regag special is a red sauce named Ow Mahi, which means fish juice! This salty sauce is made with rotten fish mixed with the red soil of Hormuz Island which is used in local southern culinary. This might sound unpleasant, but Regag bread with its unique sauce has its fans.

From north to south and from east to west of Iran, each region has its own unique Persian cuisines. You can learn about Iran food culture, origins of the foods and learn how to cook these tasty foods on Iran Culinary Tour of PackToIran. This tour includes, visiting the top touristic cities of Iran their cultural attractions besides the unique culinary cities like Rasht and Bushehr and joining family dinners and cooking classes.