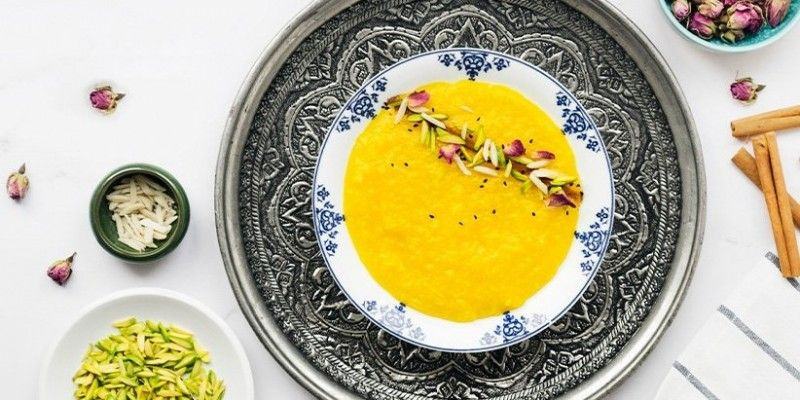 Top Iranian desserts that you should try in Iran

Desserts play an important role in a culinary and food culture of country. Besides tasty cuisines, there are a lot of Iranian desserts that you should try in Iran like traditional saffron ice-cream, Sholezard, Ranginak, etc.

After having a traditional Persian food having a tasty Iranian dessert seems like a very bright idea to gastronomy lovers and travelers who are enjoying Iranian culinary for the first time. Apart from the delicious and diverse Iranian dishes, like different types of kebab, Khoresh, bread, etc., Persian culinary also includes different types of desserts, from puddings to pastries and nougats. Iranian desserts, some of which have roots in the culture and traditions of this historical country, are usually characterized with their pleasant aroma coming from some local ingredients like saffron, cardamom, and rose water. In every city that you visit while you travel in Iran, you’ll try some new local dessert and sweets that makes you familiar with a new combination of taste and makes your Iran tour more memorable and sweeter. But what are the most popular Iranian desserts that you shouldn’t miss trying in Iran?

The traditional ice-cream of Iran (bastani sonnati) is among the top 50 popular desserts in the world, and is made with salep, milk, rosewater and pistachio. But what makes this ice-cream so tasty and pleasant are saffron and pieces of frozen and crunchy cream. Iranian ice-cream is usually served as saffron ice-cream and white ice-cream. Bastani Akbar Mashti is a famous local brand of ice-cream which serves the best traditional ice-cream in Tehran.

Date is widely grown in southern region of Iran by the Persian Gulf, where the weather is warm. This fruit has a special place in Iranian culinary especially for making desserts like Ranginak. Ranginak is usually found on dining table in ceremonies and gatherings and is made with dates, flour, walnut, cinnamon, cardamom, and oil.

Faloodeh or Paloodeh is the tasty and traditional dessert of Shiraz. This fizzy dessert is made with thin vermicelli starch noodles and is mixed with a frozen syrup containing rose water, lime juice, and sugar. Sometimes Faloodeh is topped with cherry or strawberry syrup. Faloodeh is a great choice after a long walk at the attractions of Shiraz on a hot summer day.

Sholezard is usually served in religious ceremonies as Nazri, which is a charitable meal offered to family, friends and the poor. Sholezard is a rice pudding added with sugar, and saffron which makes it yellow and aromatic, and rosewater, and is topped with almond and pistachio pieces and cinnamon powder.

This dessert is served during Ramdan month as it provides a plenty of sugar to the body after a long day of fasting. Zoolbia is a deep fried and crunchy funnel pastry and Bamieh is Persian fried doughnut. After getting deep fried both are dipped in rose water and sugar syrup.

This one is a unique dessert or snack which is sometimes served as an energizing and freshening street food. Ab Havij Bastani consists of a glass of carrot juice (Ab Havij) with a big scope of white Iranian ice-cream). Drinking a sip of carrot juice with no added sugar while a piece of sweet ice-cream is melting in your mouth is a very tasty experience.

Halva is made in some countries in the Middle East and has different recipes, and there are are various types of Halva in Iran made with different ingredients like sesame, dates, starch, etc. The most popular Iranian Halva is the simplest one and is made with toasted wheat flour, oil, cardamom, saffron and rose water. Halva is a popular Iranian dessert in family gatherings.

Sohan is the traditional sweet of Qom and Isfahan. This tasty sweet is a kind of brittle candy with a very pleasant texture made with wheat sprout, sugar, butter, egg, rose water and is topped with pistachio and almonds.

Koloocheh is Iranian cookie which is baked in different cities like Tabriz, Kerman, and Khuzestan, but the city of Fooman in Gilan Province in the north of Iran is known for the best Koloocheh in Iran. Koloocheh Fooman is usually filled with coconut paste, walnut, or cinnamon and makes a great combination with a cup of tea.

Where can you taste the Iranian desserts mentioned above?

You can taste the mouthwatering Iranian desserts at different places in cities of Iran. Some of them like Halva and Ranginak are served as a dessert after meal in professional restaurants and some traditional teahouses and some others like Saffron ice-cream, Ab Havij Bastani and Faloodeh can be found at the non-fancy cafés which are usually located in downtown around the main attractions. Also you can find the best Gaz and Sohan in confectionaries and souvenir shops in Isfahan.

You can also learn making some of the Iranian desserts and sweets and taste them with some locals on Iran culinary tour which is a unique and unforgettable experience for travelers who always look for something new.