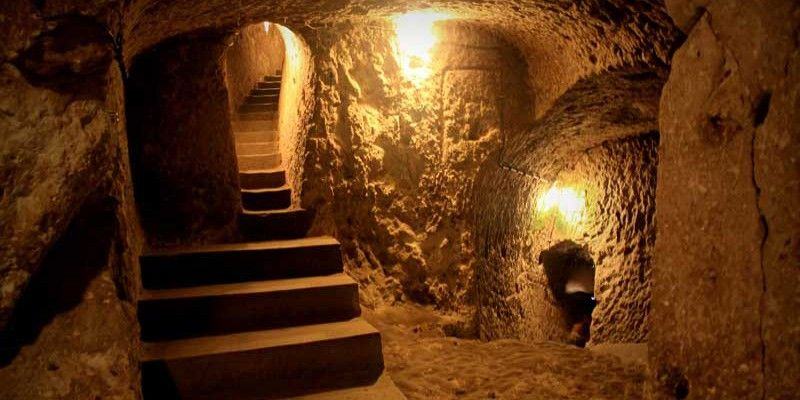 The undergound city of Nushabad

Located 7 kilometers away from Kashan, the underground city of Nushabad is an ancient heritage from the people who dug this vast city under the ground to shelter during wars.

The underground city of Nushabad is one of the most astonishing architectural wonders in the world, and one of those mysterious attractions that you should visit in Iran, as it is an astonishing sample of humans ingenuity and creativity and a newly discovered token from the history of Iran. This underground city is located in Nushabad town which is located 7 kilometers away from Kashan and is located on the route of Iran classic tours which covers Tehran, Isfahan, Shiraz and Yazd. This mysterious city dates back to 1500 years ago and is believed to be one of the capitals of Iran during the kingdom of Anushirvan (Khosrow I) of the Sassanid Dynasty. This city was abandoned and forgotten until 15 years ago, when a random guy suddenly fell down into this unknown tunnel of time while digging a water well in his house!

The architecture of the underground city of Nushabad

The underground city of Nushabad, which is also named Oyi, is a compact and vast collection of twisted and narrow corridors and rooms in small sizes which is dug right under the city in three floors and It is dug in different depths from four meters to sixteen meters! The Nushabad city was starched both vertically and horizontally and the whole underground city covers an area about four kilometers and it makes visitor wonder how they dug this vast area with simple tools. The texture on the walls indicate that these tunnels were dug by tools made with sharp objects like diamonds.

The first floor is actually a set of twisted tunnels and corridors which were designed to confuse the enemies and invaders who attacked the city, and the second and the third floors were used as shelters for hiding. This city had many entrances, a lot of which are now shot in result of flood, small and big rooms with shelves where they put candles, traps for confronting enemies, benches, and vertical wells for moving between the floors.

Pieces of evidence like potteries from 1800 years ago say that city was a shelter to locals from Sassanid Dynasty to Qajar Period, during different wars and disasters like the Mongol war, and then it was shut for decades. Today this amazing attraction is available for visit and is a fantastic place for the people who seek exotic and mysterious tokens from the people who lived in this world in previous centuries, their fears and hopes, and their invensions.