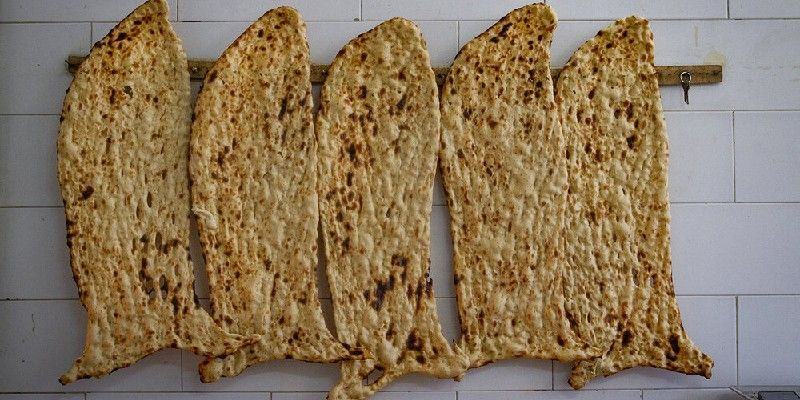 4 types of bread that you should try in Iran

As a staple food in Iran, bread comes in different types in this country. Sangak, Barbari, Taftoon, and Lavash are the four types of bread that you should try in Iran.

Although today rice is a staple food in Iran and most of the Iranian foods like kebabs and stews are served with rice and it has been planted in the north of Iran since centuries ago, this is not a very long time since this food has become one of the most important ingredients in Persian culinary. But what was Iranians’ staple food before rice made its way to their dining tables?

According to the excavations in the Zagros Mountain area in Iran, the people living in the Iranian Plateau were busy with agriculture and producing vegetables since 12000 years ago and they played a vital role in the development of agriculture as one of the most important industries in the world. One of the oldest products was wheat which led them to the idea of cooking bread as a nutritious and energizer food. Therefore, bread has always had a special place in Iranian culture since old times until today, insofar as it is still being used as a symbol of blessing and a gift from God in their ceremonies like Nowruz and weddings, and throwing away the leftover of bread as garbage is considered as an impolite action, especially for grandmothers!

Today with various types of bread entering Iran from other countries, the traditional types of bread in Iran are still the best match for having Iranian cuisine and these meals are at their best when served with these types of bread.

What are the best types of bread that you should try in Iran?

Sangak or Nan-e Sangak is a whole wheat plain rectangular bread. The word Sangak means small stones and pebbles and it refers to this bread getting baked on a layer of hot small stones in the oven. Sangak bread has been mentioned in the history books from different periods like Safavid, Qajar, and even Sassanid! There are still some Sangak bread bakeries in each city that bake this bread on small stones and top the bread with some sesame and fennel flower seed, that make this bread twice tastier. Abgoosht or Dizi, which is an Iranian meat stew, is a popular Iranian food that is usually served with a piece of hot fresh Sangak bread.

Barbari Bread or Nan-e Barbari is another traditional bread of Iran. The word Barbari refers to the Barbar tribe who lived in the northeast of Iran, between Afghanistan and Iran, and taught Iranian how to bake Barbari bread. The appetizing smell of Barbari bread and its light texture is the result of special yeast and sesame used while cooking it. To experience the pleasure of having Barbari bread, take a hot and well-grilled bread from the bakery and have it with cheese and walnut as an original Iranian breakfast.

Taftoon bread (Taftan bread) is a thin wheat bread which is baked in Iran, India, and Pakistan and is a good choice for people who are on a diet. The word Taftoon means heating and grilling in Persian and this bread is baked in a clay oven with a circle form.

Lavash is a very popular bread in Iran especially in Tehran, and also in neighboring countries like Armenia, Georgia, and Turkey. This thin bread is baked in an oven or on a pan. Apart from being served by almost any Iranian food, Lavash bread is also used for making foods like samosa as a thin wrapper for other ingredients. The tradition of cooking Lavash in bread in Tehran was listed as a cultural Intangible Heritage by UNESCO in 201.

Iran Culinary Tour of PackToIran offers a wonderful chance for the ones who are interested in learning about undiscovered food cultures and new recipes, besides visiting the top cultural sites of Iran. Take this tour and find out about the diverse and amazing Persian culinary.