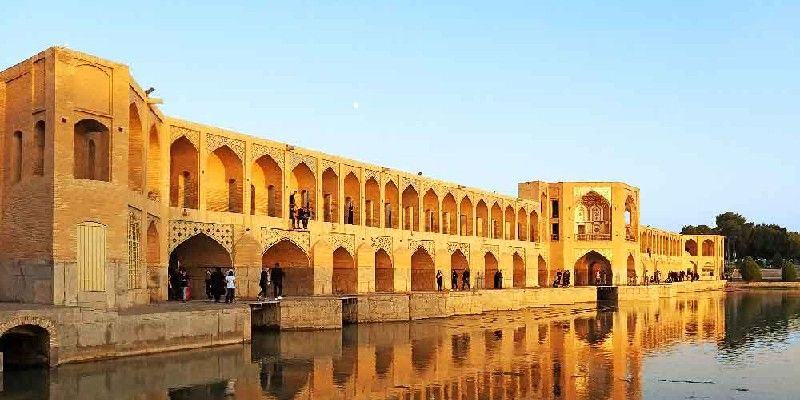 Top 9 places to visit in Isfahan

The historical city of Isfahan, located in central Iran, is one of the highlights in Iran for almost every traveler who take a cultural and historical Iran tour. Its attractions which are among the most wonderful attractions that travelers visit in Iran are:

The astonishing Isfahan (Esfahan), which was once one of the most glorious cities in the world, was the capital of the Safavid Dynasty during 16th and 17th centuries and this led to the construction of gorgeous and royal buildings in this city. Today, Isfahan is a modern and organized city with top universities and cultural centers, good hotels, and very civilized people, all making this city one of the best destinations a traveler visits in Iran.

But what are the top places to visit in Isfahan?

Located in the heart of Isfahan, Naqshe Jahan Square is the most important attraction of this city which was constructed by the order of Shah Abbas I to celebrate the king’d glory and the role of Isfahan as the new capital of the Safavid Empire. This glorious square is 160 meters wide in 560 meters long and its construction which was led by Sheikh Bahai (the great mathematician and architect) took a long time from 1598 to 1629. Naqshe Jahan Square is surrounded by two story shops which are used as handicraft stores today, and other Safavid constructions, including the Sheikh Lotfollah and Jame Imam Mosque and the Ali Qapu Palace, all forming the royal complex registered as a UNESCO World Heritage Site.

This royal and imperial building is located on the west side of the Ali Qapu Palace and was the residential palace of Shah Abbas and also a palace for holding royal meetings and ceremonies with ambassadors and kings from other countries. Each store of this 6 story construction, decorated with amazing tile work, stucco work and frescos by Reza Abbasi (the great painter), was used for a specific purpose. The first floor was a governmental office, the third floor was a hall where the king received visitors, and the sixth floor, which has amazing practical decorations for acoustic purposes, was a music and concert hall. The balcony of the sixth floor is the best place for viewing the Naqsh-e Jahan Square from the top.

The outstanding Sheikh Lotfollah Mosque was built on the eastern side of the Naqsh-e Jahan Square as private mosque of the royal Safavid king (Shah Abbas) and his family. Since this mosque was a private property, it is small and has no minarets, although the ornaments including the Persian blue, turquoise and yellow tile work, the mesmerizing design under the dome, and the lattice windows catching the day light, have made Sheikh Lotfollah one of the most beautiful mosques of Iran.

The glorious Shah Mosque, also known as the Jame Imam Mosque, is the second mosque built around the Naqsh-e Jahan Square by the order of Shah Abbas. His aim for building Shah Mosque was creating a new mosque which is as glorious as the Atiq Jame Mosque of Isfahan, but it was finished a few months after the king’s death. Since every mosque’s Mihrab was required to be faced toward Mecca, the dome is not located along the entrance and they are connected by a corridor with a slight turn, and this asymmetrical design makes this mosque yet more beautiful. The dome of Shah Mosque is known to be the highest one in Isfahan and has an amazing acoustic properties. The voice of the person standing under this dome will be reached to everyone in the hall, even if they whisper.

The Chehel Sotoun Palace (literally meaning the 40 columns palace) was used by Shah Abbas II as a palace for his receptions, entertainments and ceremonies, as shown in the great frescos inside the palace, beside other frescos showing the battle scenes. This palace is located in the middle of a garden with a long pool on which the image of 20 columns are reflected and beautifully create the illusion of 40 columns. This garden is among the 9 Persian Gardens inscribed as UNESCO World Heritage sites.

Also known as the Jame Atigh Mosque of Isfahan, this congregation mosque is the oldest monument of Isfahan and is known as the museum of Islamic architecture. This four-iwan mosque is believed to be built in 77 AD with reconstructions and extensions until 20th century especially during the Seljuk Dynasty, therefore each part of this mosque shows architecture style of a specific Islamic period. Also, prior to being used as a mosque, it is believed to be a Zoroastrian fire temple. Uljaitu Iwan and its significant Mihrab, Darvish Ivan, the Shabestan of mosque with its circular pillars and its glorious courtyard are just some of the highlights of Jame Mosque of Isfahan.

8- New Julfa and the Vank Cathedral

In 1606 and during the kingdom of Shah Abbas I, about 150,000 Armenian where moved from old Julfa (Nakhchivan) to Isfahan to be safe from the Ottoman Empire. They built a new quarter according to their own traditional architecture style and called it the New Julfa. This quarter is still one of the biggest Armenian quarters in the world, and one of the main attractions of Isfahan. Vank Cathedral, also known as the Holy Savior Cathedral was built in New Julfa district. The sanctuary of the church is a masterpiece ornamented with frescos illustrating the Bible stories, Iranian floral ornaments and local Armenian tales.

Built by the order of Shah Abbas II the Safavid king in 1650, Khaju Bridge is the finest bridge of Isfahan passing over the Zayanderud River. This two story building has 23 arches ornamented with tile works and paintings and a pavilion at the center, which used to be a royal meeting point.

Si- o Se Pol (literally meaning 33 bridges), also known as Allahverdi Khan is one of them historical bridges of Isfahan which was built over the Zayandehrud River during Safavid Dynasty. This bridge is one of the icons of Isfahan and is a recreational place for the locals of the city. Si-o Se Pol is 298 meters long and has 33 arches built over another row of arches through which the water flows.

Visitng Isfahan is one of the most important parts of travel to Iran and no trip to Iran is complete without exploring the magnificent attractions of this city. therefore, this city is included on almost every Iran travel itinerary. Wether you choose one of our Iran tours, or you just want to visit attractions of Isfahan on a one-day tour, PackToIran is available to help you enjoy the beauties of Isfahan.

2 0
You can rate this post
Users Rated: 2.5 From 2 rates
Comments
Tags : Isfahan attractions