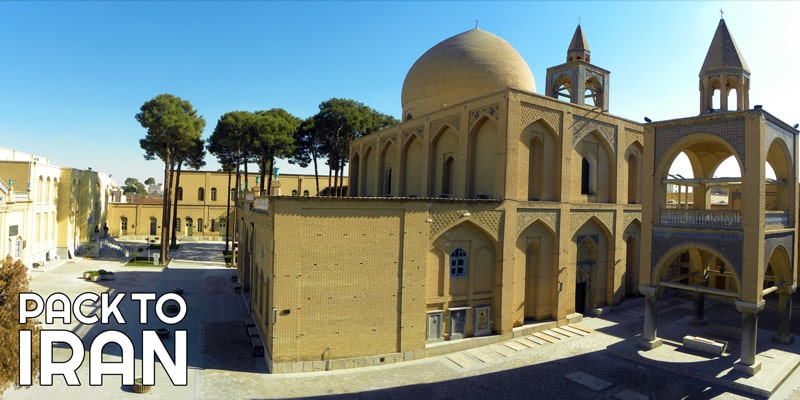 Vank cathedral or the Holy Savior Cathedral is an Armenian church located in New Julfa District in the heart of the Islamic city of Isfahan. This cathedral is an architectural masterpiece which shouldn't be missed visiting in Isfahan.

The beautiful city of Isfahan is well known all around the world for its spectacular Persian Islamic architecture! A city with fabulous mosques and Madrasahs and caravanserais which gives every visitor a chance to discover more details of the Islamic architecture of Iran. But to everybody’s surprise, this city’s beauty is not only limited to heritages from the Islamic era! In Isfahan, there is a neighborhood known as New Julfa where many Armenian Christians have been living there since 17th century. New Julfa district is still well known as a tranquil area with a European setting and architecture. There are 13 churches in this district right now which make New Julfa a different area as compared to the other part of the city! Among these churches, Vank Cathedral is undoubtedly shining as the most gorgeous one. Vank Cathedral which is known as the most important architectural and artistic treasure of Isfahan is a must-see attraction in Iran, a masterpiece representative of artistic expression of Christians in Iran and Armenians who migrated to this place 400 years ago duo to the Shah Abbas's the great (1587- 1629) ambitious plans of enhancing the economic prosperity of his capital Isfahan.

Architecture and design of Vank Cathedral

Vank Cathedral was constructed during the reign of Shah Abbas the second who ruled Iran from 1642 to 1666. The word “Vank” in the Armenian Language means monastery and the church is also referred to as the "Cathedral of all the Saviors". Vank Cathedral covers an area of approximately 4000 square meters including the main church and its courtyard, monastery, belfry, library, two museums, clock tower, Bishops’ room, and the community halls. The cathedral is a very significant heritage in terms of architectural design as it presents a combination of Islamic, Armenian, and Christian architecture style! Being constructed in the capital city of a Muslim kingdom, the Vank Cathedral exterior architecture especially its huge dome follows the style of the Persian mosques!

The exterior walls of the cathedral are covered with bricks and tiles are designed with winged angels. The dados of the sanctuary's inner walls are covered with beautiful tiles while the interior walls of the sanctuary are covered with plaster and eye-catching murals which is the most splendid feature of this building. All of the paintings are the work of Armenian artists who learned their art in Europe and were influenced by Italian and Dutch masters. These paintings mainly represent stories from the Holy Bible, the life of Jesus Christ from birth to the ascension, the day of resurrection and the judgment, and legendary pictures of heaven and hell. A combination of delicate Persian floral ornaments from Persian miniature and Armenian national motifs are also obvious on the ceilings and walls. The display of frescos on tiles with magnificent gold and blue frames has created a pleasant and lovely setting inside the church. The required expenses for constructing the church were provided by the Armenian community and the expenses of all paintings and decoration of the church were provided by “Avdic Stepanosian” which are unique among Armenian churches.

All around the walls of the church, there are many inscriptions which are written in the Armenian language that invite the readers to pray for the constructors of the church and their descendants. The portal inscription which is written in Armenian contains the name of Shah Abbas II and the dates of the beginning and completion of the Church. A small graveyard occupies a part of the Vank Cathedral courtyard, where some of the graves belong to some important persons such as Archbishop Khachatur Gesaratsi, the founder of the first Iranian printing house. Another important part of the Vank Cathedral is the Armenian Genocide Monument which started on April 24 1915 during the World War I by the Ottoman government. The Armenians living in New Julfa still gather in Vank Cathedral on the anniversary of this incident and light candles for the victims.

The museums in Vank Cathedral:

There are two museums inside the Vank complex: The Vank Museum and the Armenian Anthropology Museum. Vank museum is one of the most important and most comprehensive collections of biblical manuscripts. Around 700 handwritten books, a variety of objects related to the Armenian community in Isfahan such as Safavid costumes, European paintings brought back by Armenian merchants, tapestries, and embroideries are kept in this museum. One of the most interesting objects in the Vank Museum is a piece of hair, which belonged to a young girl on which a sentence from the old testament has been written with a diamond pen by an Armenian craftsman in 1974. Visitors can read the sentence through a microscope which is located over it. The other museum is an exhibition of ethnological objects related to Armenian culture and religion.

Considering the location of your hotel in Isfahan you can take the four main streets of the city for reaching the Vank Cathedral which is located in Hakim Nezami Street. From here you should take a short walk through the cobblestoned alleys where cars do not usually enter. By 20 minutes walking from Si-o Se Pol Subway Station you can reach Vank Cathedral.