Located in the heart of the Central Desert of Iran, the stunning city of Yazd is one of the historical cities of the world that attracts numerous travelers to visit and that is because of its awesome historical monuments and earthen buildings, which is one of a kind in the world of architecture, and its rich culture and history. The Jameh Mosque of Yazd is one of the main attractions of this city and also one of the top mosques in Iran. With its turquoise dome, this antique mosque is like a gem inside the UNESCO-listed historic city of Yazd.

Like all the other Jameh mosques in Iran, the Jameh Mosque of Yazd was built at the center of the city so that all the people could have easy access to this holy place for saying Friday prayers and joining the city councils and religious rituals which were held at the mosque. 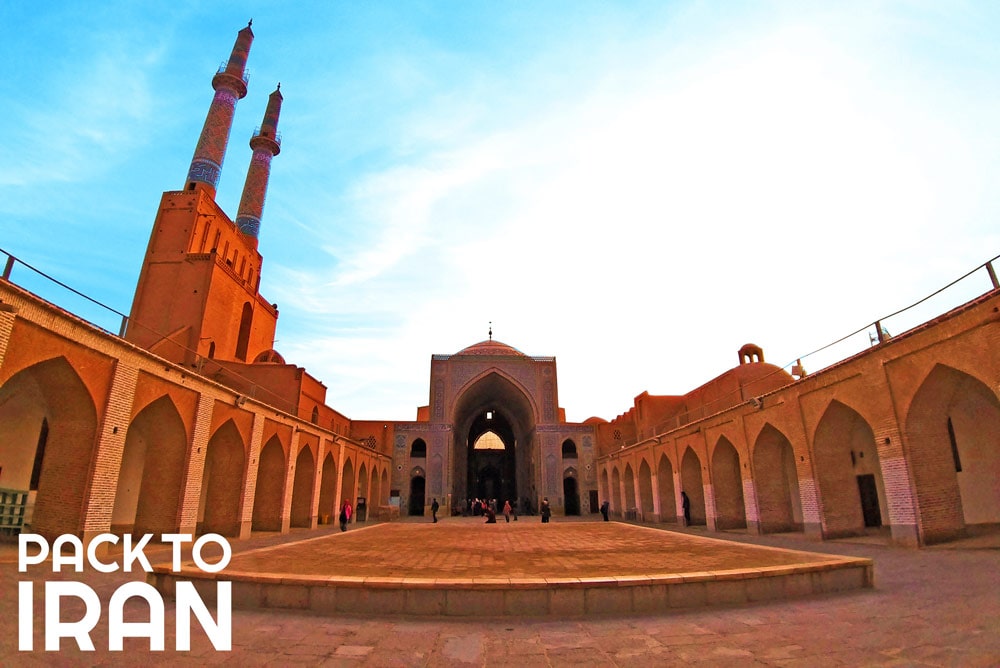 The history of the Jameh Mosque of Yazd

According to the historical documents, the building of the mosque was based on the remains of a Zoroastrian Sassanid fire temple, however, today no physical evidence is left from the fire temple. The construction of the mosque was completed in more than a century and different parts of the building were added or reconstructed during different dynasties ruling Iran like the Ilkhanid, Safavid, Timurid, and Qajarid. The first founder of the Jameh Mosque of Yazd is believed to be Amr ibn al-Layth the ruler of the Saffarid Dynasty, but the most famous founder was Ala ol Dowleh Kalanjar, the governor of Yazd (474-498 Hijri) who extended the mosque by adding a dome and some Iwans (vaulted halls). After his death, the daughters of Faramaz Ibn Kakuyi added a new Shabistan to the mosque. Unfortunately, nothing is left from the primary constructions of the mosque and the current monument is what was constructed by the order of other kings and governors during the 8th century Hijri. 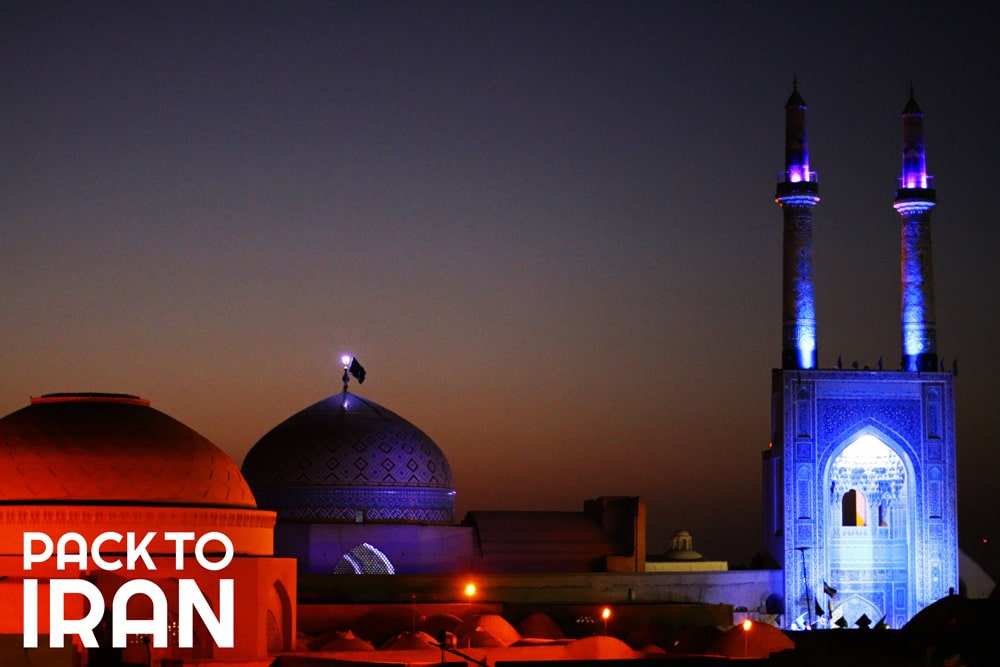 The architecture of the Jameh Mosque of Yazd

The Jameh Mosque of Yazd is constructed based on the Azerbaijani architecture style, which is one of the main Iranian architectural styles and is a 9800 square meter area including six entrances connecting the mosque to the city through different chambers, a high entrance façade, a large rectangular Sahn (the courtyard in Islamic architecture), vaults, etc. built during different periods. Apart from its majestic and high iwan, which makes it stand out among the Islamic mosques, the Jameh Mosque of Yazd is known for having one of the highest minarets in the world which are 52 meters high and get thinner from the bottom to the top and are decorated with eye-catching and delicate blue tilework.

The double-shelled dome is another element of the mosque which was built by Architect Saad ibn Muhammad Kadum during the Ilkhanid Era. This dome is an architectural and engineering masterpiece ornamented with amazing geometrical tilework glazed in Persian blue and turquoise which is notable from afar at the heart of the Historic City of Yazd. Generally, the tileworks and the decorations of the Persian mosques are meant to resemble and simulate the heaven above. The decoration in some mosques includes floral and curved forms and patterns while the tile decoration in the Jame Mosque of Yazd is characterized by its geometrical forms and Bannai Scripts (a kind of Kufic script) which follows a geometrical pattern. The southern vault of the mosque leading to the under dome hall is covered with Bannai scripts showing 110 names and titles of the great God, and the under dome is covered with Islamic names and phrases including Allah, Muhammad, Ali (the first Shiite Imam), etc.

In Persian mosques, Mihrab is a vault-shaped niche in the wall which shows the direction of Qibla (Mecca), towards which the Muslims say their prayers. The Mihrab of this mosque is located in the under dome hall of the mosque (the main hall) and is ornamented with Muaraq tilework. It is said that the two chambers located on the two sides of this Mihrab were used by local women and men for entering the mosque privately to consult and speak with the Mullah of the mosque. Two of the largest Qanats of Iran passed beneath the courtyard (Sahn) of the mosque. However, these two Qanats are not active anymore, the remains are still available. 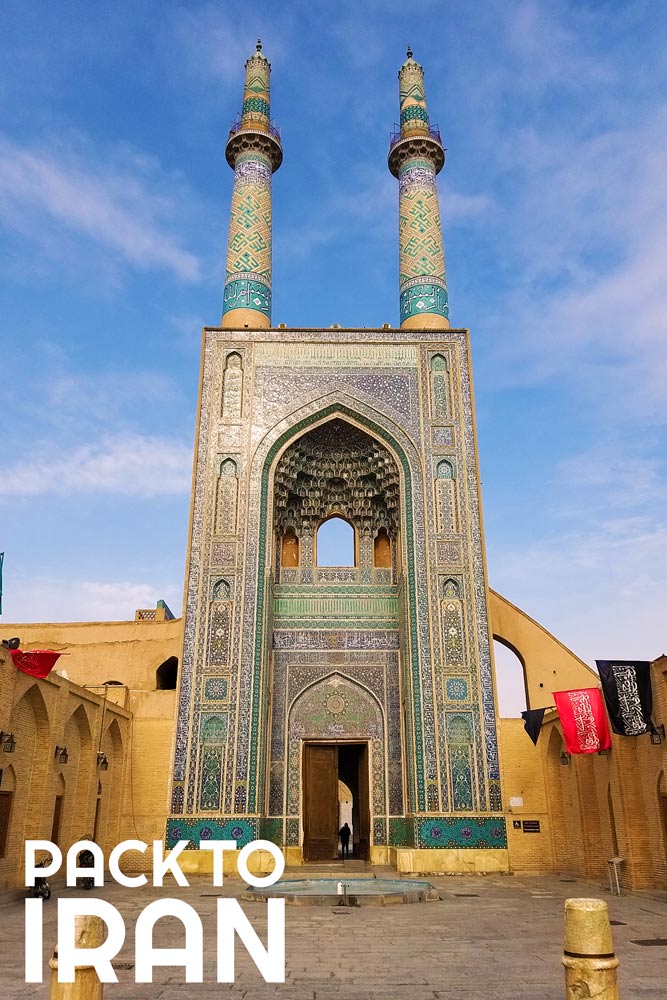 Visiting the Jameh Mosque of Yazd

The Jameh Mosque of Yazd is located in Imam Khomeini Street, in front of the Borj-e Saat (Marker Clock Tower), which is close to most of the hotels of Yazd and you can reach the mosque by a short walk from your hotel through the old alleys of Yazd.

The mosque is open for visitors from 8 am to 8 pm, and since it is still used as a public mosque, you should respect the locals' privacy during the praying time at the mosque.