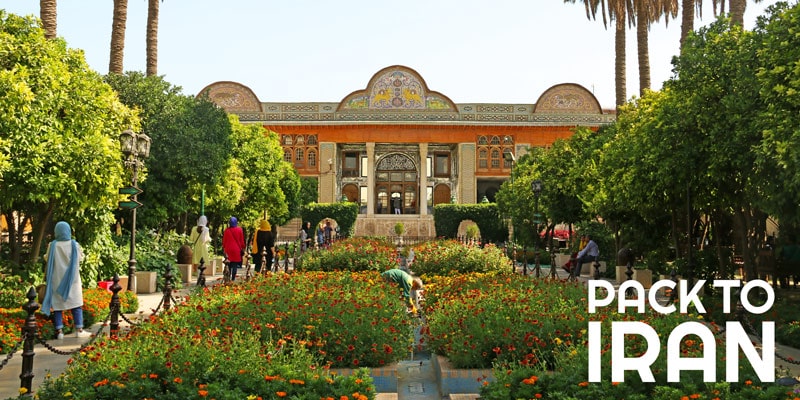 Naranjestan- e Ghavam or the Ghavam House is a traditional and historical house located in downtown Shiraz and one of the most attractive monuments of this city that you should visit.

Shiraz is one of the main touristic cities of Iran with a lot to offer, from Persepolis built 550 B.C. to mosques and palaces built during the Zand and Qajar dynasties in the 18th and 19th centuries. Two of the main Qajar (1789 - 1925) buildings in Shiraz including the magnificent Nasir al Mulk mosque and the lovely Narenjestan-e Ghavam are among the main attractions that shouldn't be missed while you visit Shiraz.

The name of the mansion

This pleasant building has different names like “Ghavam House”, “Ghavam Garden”, “The Orange Palace”, “Narenjestan-e Ghavam”, and “Narenjestan”. Today it is mainly called Narenjestan by Iranians. The name Narenjestan means a place for citrus trees and that’s because there are several citrus trees mainly the famous sour orange tree or “Narenj” in the garden. Also, Shiraz is famous for this type of tree especially during spring when these trees bloom and create a fragrant atmosphere in the city.

Ghavam family were among the richest and most powerful people of Iran during the reign of Qajar in Iran. They were so rich that they ruled Fars Province and the southern parts of Iran semi-independently. Qavams were great merchants working with many countries so they needed buildings to serve mainly as formal and ceremonial purposes, and that’s why the magnificent Narenjestan-e Ghavam was built. This construction took almost ten years to be completed and to do so, the Ghavam family hired Mirza Ibrahim Khan as the architect as well as some of the best artists of Iran to do the decoration. Naranjestan-e Ghavam was used to be the house of the Ghavam family for many years until 1967 when Ghavams dedicated the mansion to the Shiraz University as a gift. It was restored and was used by Arthur Upham Pope, the head of Asia Institute for few years as his office. Arthur Upham Pope was an American archaeologist who came to Iran in the 20th century with his wife and dedicated most of his life to Persian culture and art until the end of their lives when they got buried in Iran according to their will.

The entrance to the building is located south of the complex where you see a beautiful ceiling. Then you enter a well-tended courtyard planted with citrus trees and flowers and pools. It is interesting to know that the old Persian houses look humble from the outside while the interior is a world of decoration, especially the ones built by rich people like Ghavams so you will see tiles works, mirror works, and other types of decoration right from the entrance. The southern rooms of Narenjestan were used as the administrative offices of the building since it was mainly used for formal purposes. Today these rooms are used as handicraft shops selling fine handicrafts of Shiraz. The main building stands at the back of the court and is fronted by a pool. The principal section is a 3-store building and is the most beautiful part of Narenjestan-e Ghavam. It is decorated with many types of decoration like sparkling mirror works, painting on plaster, painting on wood, stone reliefs carved in imitation of the ones in Persepolis, mosaic tiles, 7-color tiles, painted pictures of European women, inlaid doors that link different rooms and sections, stucco moldings, etc. The central portico of the building is among the most beautiful parts because of its amazing mosaic mirror decoration that catches the eyes of all visitors. You can go to the upper floors, which were used as rooms for guests and visitors to rest and wait for the Ghavams to accept them, using the staircases on both sides of the portico. One of the rooms on the right side has a unique, handsome wooden ceiling with beautiful paintings on it. This room gives a good view of the ground floor hall to the visitors. The basement of Narenjestan-e Ghavam has been used as a museum since 1967 and is made up of 8 halls exhibiting historic objects mainly from the Fars Province like coins, ceramic vessels, tiles, pots, boxes, and stones.

The main building is decorated with a semi-circle pediment above its roof which is ornamented with colorful Qajar tilework. One of the paintings one this section is the “Lion and the sun” symbol which is one of the oldest emblems in Iran that became very popular during the reign of Qajar and Pahlavi (18th – 20th century) and was the main element on Iran’s national flag till 1979. This symbol has had different meanings and interpretations throughout Iran's history.

-     The best time to visit Nasir al-Mulk mosque is early in the morning, since it’s 5 minutes of walking from the pink mosque to Narenjestan, it is recommended to visit the palace right after the mosque

-     With the entrance ticket, you can visit the museum in the basement too

-     There is a café in the courtyard of Naranjestan, where you can sit and have a herbal drink of Shiraz while enjoying the heavenly weather of the garden

-     You can visit the “Zinat al-Mulk mansion” after visiting Narenjestan. This building was also built by Ghavams and was used by one of the family members as her home

Explore the charming Naranajestan-e Ghavam, this scenic architectural masterpiece of Shiraz and learn about other attractions of this city on the guided Shiraz City Tour.