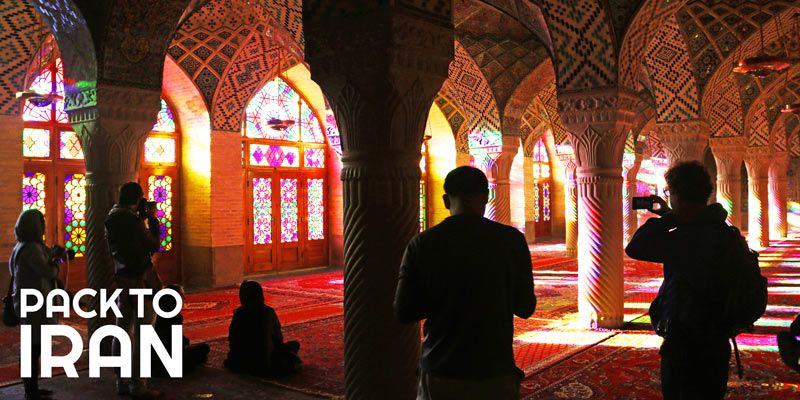 Located in Shiraz, the city of poetry and nightingales, the Nasir al Mulk Mosque was built during thr Qajar Dynasty and is now one of the top photography places and architectural masterpieces that you should visit in Iran.

The construction of the Nasir al Mulk Mosque (Masjed-e Nasir al Mulk) was started during the Qajar Dynasty, in 1876 by the order of the governor of Fars, Mr. Mirza Hasan Ali Khan who was known as “Nasir al Mulk” and wanted to be remembered by constructing a memorable monument like many other governors and kings in the world. So, he asked two of the best architects of Shiraz to create a wonderful piece of art and build a mosque. Mr. Mirza Reza Kashigar and Mr. Mohammad Hasan started their job and built this mosque in 12 years. After a short time, Haj Mirza Ayat added stained glass windows to this monument and doubled its beauty as you see it today. Today the Nasir al Mulk mosque is characterized by its gorgeous pink tilework and stained glass windows.

Nasir al Mulk Mosque has two iwans on the north and the south side. The iwan on the north has much more ornaments and more eye-catching tilework than the southern one which was constructed to symmetrize the design of the mosque. The northern iwan is located between two eastern and western shabestans which is one of the main elements of Iranian mosques. With its stained-glass windows which stream a colorful light into the hall, its arches which are covered with geometric tilework, and the carved pillars, the western Shabestan of Nasir al Mulk Mosque is the part that leaves every visitor speechless. The courtyard of the mosque has a rectangular pool at the center and is surrounded by walls covered with eye-catching tiles in turquoise, green, yellow, and especially pink, a color palette that characterizes the architecture ornaments in the city of Shiraz. The craftsmen used a very expensive glaze that contained gold to color the tiles with pink and this is why this mosque is nicknamed the “Pink Mosque”.

This fabulous mosque is still supported by the Endowment Foundation of Nasir al Mulk. Nasir al Mulk stained glass windows and the pleasant atmosphere of the mosque are still the reason why many travelers and locals visit this attraction in Shiraz and choose it as a great photography spot. The best time for visiting this mosque is in the morning especially from 9 am to 11 am when the hall is covered with patterns flecks of light. This site is located in downtown Shiraz, close to other attractions like the Naranjestan Palace, Khan Madrasah, Atiq Mosque, Shahcheragh and the Vakil complex, and many of the famous hotels of Shiraz. So you can easily walk to this mosque and enjoy its amazing beauty before visiting other attractions around.

Book Shiraz City Tour from here and explore the beauties of Shiraz on a guided walking tour.