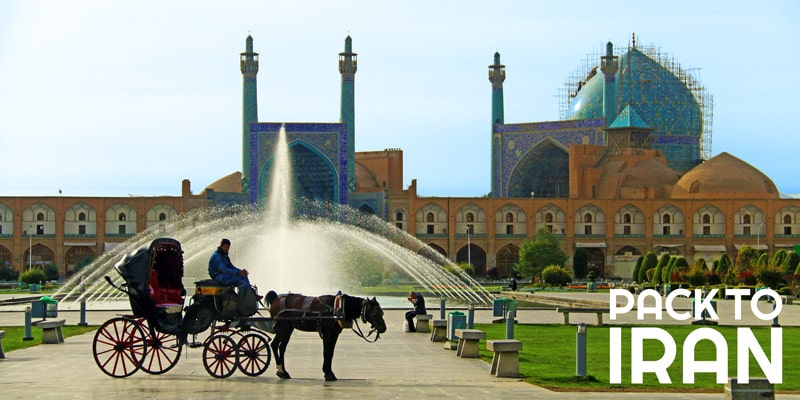 Naqshe Jahan Square (Meidane Emam) is one of the top touristic spots and architectural masterpieces of Iran and was constructed by the order of Shah Abbas the Safavid King in Isfahan in 1602.

Naqshe Jahan Square (Meidan Emam) of Isfahan is one of the highlights of Iran and sometimes the reason why some travelers decide to visit Iran. This Iranian and islamic architecture masterpiece which was built in 1602 is an amazing UNESCO World Heritage Site of Iran which testemonies the level of social life and artistic skills of Iranians during the Safavid Era (1501-1722).

king Abbas I, decided to relocate the capital from Qazvin to Isfahan in 1598 as it was fairly centrally placed, it had an excellent climate and great reserves of water. The king put lots of effort into making his new capital as beautiful and fantastic as possible. Therefore, many artists and architects from all around the country and even from some foreign countries like Italy, India, and later even from China were invited to Isfahan to cooperate on this project! They helped King Abbas I create a magnificent capital to the extent that in 30 years its fame was spread to all the countries of Europe. Among all those monuments which were built in Isfahan by order of king Abbas I, the Naqshe Jahan square is the most wonderful one! Though there was an old square that served as the city center in Isfahan before the relocation of the capital, the king decided to create a new city center for the development of his new capital! The Naqshe Jahan square was designed by the celebrated architect at the court of Shah Abbas I, master Ali Akbar Isfahani. The square is a huge arena of more than 80,000 sq. m, 510m (1673 ft.) long, and 163 m (535 ft.) wide, making it the second-largest historical square in the World, second to Beijing Tiananmen Square.

The backcloth is still today as much as it was then- the long arcade walls elaborately broken by the four principal structures which dominate the square; The Royal mosque (now called the Imam mosque) with its magnificent entrance portal and its huge dome that impress every visitor, the Sheikh Lotfollah Mosque which can be listed as one of the most lovely mosques in the whole Islamic countries, the Ali Qapu Palace with its balcony which dominates the whole square and the entrance portal of Royal Bazaar (Bazar-E Gheisaryeh). At each end of the square, there was a pair of marble polo goalposts, which still survive. During the day, the square was always crowded with people and it was full of merchants from all around the world, as well as storytellers, jugglers, mountebanks, and acrobats, without whom no picture of an oriental market would seem complete. In the evening the square was often used for playing polo matches while the royal guests could have a seat on the balcony of Ali Qapu Palace enjoy watching the game! It is said that King Abbas the great was an excellent polo player, and whenever he hit the ball, the trumpets in the Drum house which used to be located by the entrance to the bazaar, sounded a fanfare.

According to the western travelers such as the French merchants Chardin or Tavernier who wrote a lot about the Naqshe Jahan Square in their diaries, there was a mast in the middle of the square which served for archery practice. Upon the top of it was placed an apple or a small melon or a golden cup on royal occasions. The archers, riding at full gallop, had to pass the mast, then turn in the saddle to fire. But there is no sign of that mast anymore as formal lawns and a pool in the middle of the square were added in the Pahlavi period. Also, there used to be a clock tower set next to the Sheikh Lotfollah Mosque which has been vanished in the 19th century. In the past, the arcaded structures around the square housed commercial firms, public places, and service quarters for the palace. Nowadays the ground floor of these buildings is mainly allocated to the handicraft shops which mainly sell the handicrafts that are made in Isfahan such as miniature painted boxes or hand-stamped tablecloths called Ghalamkar, Minakari dishes, carpets and of course shops which sell the famous nougat of Isfahan known as Gaz! At the moment the first floor is mostly empty!

To visit the fabulous sites around the Naqshe Jahan square you have to be there during the day time (9:00 am – 5:00 pm), but try not to miss the evenings of the Square! When the buildings are illuminated and hundreds of locals are there, enjoying walking around, shopping, and having a simple picnic dinner! Do not hesitate to join them if you are invited to have a cup of tea with a lovely hospitable local family. When you are visiting this square try to reconstruct the scene as it would have appeared in its heyday in the 17th century. Of course, it should be mentioned that all around the square you will find many cafes and a couple of tea houses where you can have a cup of coffee or tea while thinking of the charms of the Naqshe Jahan Square.

Enjoy exploring the attractions in Isfahan and learning more about the tales and facts about the picturesque Naqshe Jahan Square on PackToIran Isfahan City Tour all year around. Contact us and book this tour for later.

2 0
You can rate this post
Users Rated: 6.67 From 4 rates
Comments
Tags : Isfahan attractions