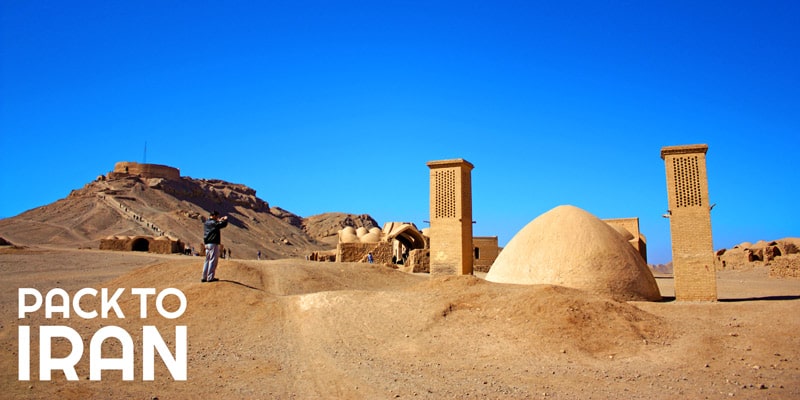 The Zoroastrian Tower of Silence in Yazd

The Zoroastrian Tower of Silence in Yazd is one of the most amazing dark tourism attractions in Iran which must be visited in Iran. Tower of Silence is a circular construction which was built on top of a hill where they kept the corpse of dead in order to keep water, soils, wind and fire from pollution.

Located 15 kilometers away from the city of Yazd, the Tower of Silence or “Dakhmeh” is one of the largest and most important attractions left from ancient Zoroastrians in Iran, and one of the significant dark tourism attractions in Iran with a mysterious atmosphere and a lot of information about the the ancient world and the beliefs of the people living during that time.

What is the Tower of Silence?

Water, fire, soil, and wind are the four main sacred elements in Zoroastrianism religion and they believed that these four sacred elements shouldn’t be polluted. They also believed that a dead person’s corpse is haunted by an evil spirit and it shouldn’t be buried directly in the soil as it will pollute the sacred soil. Therefore, they came up with the idea of building the Towers of Silence away from their cities and where they lived. They built circular Dakhmeh in high places out of cities and people put the corpse on the top of the tower and covered it with slab stones so that the corpse wouldn’t be in touch with the soil and pollute it. The towers were built considering the direction of the wind so that the impurity wouldn’t reach the residential area in the city. After locating the corpse on the towers, the carnivorous birds attacked the corpse and took every piece of the body except the bones, which were thrown into a well or the ossuary to rest forever. The circular part of the towers was divided into three separate parts for women, men, and infants. The circle was surrounded by a round wall and centered with a one-meter well. The towers have different parts including:

For building the towers, the architects used adobes and stuccos which are impenetrable substances, and kept the soil clean.

Zoroastrianism is one of the oldest monotheism religions (more than 6000 years of antiquity) in the world and despite Arabs and Mongol invasion in Iran it is still practiced in Iran especially in Yazd and Kerman. A big population of Iranian Zoroastrians live in the city of Yazd (including 5-10 percent of the population of the city) and still practice ancient rituals of Zoroastrianism the way their ancestors did. Therefore, this city is home to the top Zoroastrian historical attractions like the Fire Temple which enshrines a sacred fire named the Atash Bahram (the Victorious Fire) which is burning since 1500 years ago, and the wonderful Tower of Silence.

The Tower of Silence in Yazd is located 15 kilometers away from the city around the Safaiyeh District and is known as one of the 15 significant samples of dark tourism in Iran. There are two towers in this area. The first one is named “Monkjy Hatria” which is originally an Indian Zoroastrian with a 15-meter height, and the other one which is related to Qajarid Era is named “Golestan” and is 25 meters’ high.

On the eastern side located 150-200 meters away from the towers, there are some adobe and stone-made mansions named “Kheyleh” which were built on two floors for holding funeral ceremonies. One of the rooms was used for lighting fire. Two men were in charge of lighting fire in this room for three nights after the death of each person, so that the light of the fire would shine to the corpse through a small window on the wall of Tower of Silence during the night. This was done to support the soul of the death in dark and lonesome as the Zoroastrians believed that the soul of the dead is around the corpse for three nights after the death before it flies up to the sky. After a while, they cleaned and sanitized the area so that they could use the Dakhmeh again as a reusable cemetery. The mysterious tradition of leaving corpses on the Towers of Silence by the Zoroastrians was continued until 50 years ago and then they started burying the dead around the towers, but the area has remained as one of the top attractions that shouldn’t be missed in Yazd. This attraction should be visited during day time, as it doesn’t have lighting during the afternoon.

Visiting the Tower of Silence in Yazd

The best time of year for visiting Yazd and the Tower of Silence is in Spring (March to June) when the weather is mild in this city and the days are long enough for visiting the highlights of the city and also in autumn when the weather is cool and pleasant. Yazd City Tour is one of the popular day tours of PackToIran, including a visit to both Zoroastrian attractions of Yazd, the Zoroastrian Fire Temple, and the Tower of Silence and Islamic era attractions like Amir Chakhmaq Complex, and the Yazd Jame Mosque.