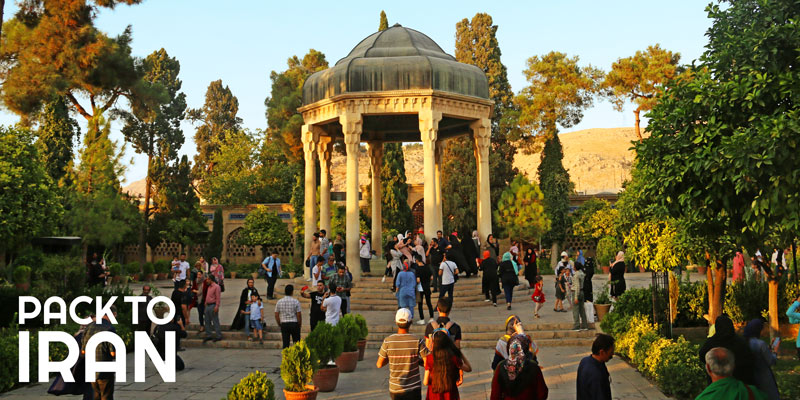 Hafez is the most beloved and popular Iranian poets known for his great poem book (Divan-e Hafez) which has a special place in Iranians, ceremonies, culture and even daily life. Read about his life, poems and tomb which is a great architectural masterpiece.

Hafez Khawjeh Shams al-Din Mohammad Shirazi is known by many by his pen name Hafez (or Hafiz). He is Iran’s most beloved and most widely read poet and his words are the very symbol of the Persian lyric for both Eastern and Western readers. His collected works can be found in the houses of almost all Iranians who learn his poems from young ages, use them as sayings, read his poems in Persian ceremonies like Nowruz and Shab-e Yalda and use his words in Persian traditional music, painting and calligraphy. In times of doubt, Iranians ask Hafez for good advice and to show them the path. This tradition is called Fal-e Hafez which is a type of divination by first praying for Hafez, asking their question and finally opening his book (Divan of Hafez) randomly and reading the first poem that they see.

Our existence is but a riddle, O Hafez

Famous as this poet is worldwide, and as much as his poetry has been interpreted and analyzed, our knowledge of Hafez’s life is inadequate. Most scholars believe he was born in 1325 and died in 1389. He was born in Shiraz and lived most of his life in the lovely city of Shiraz. His father died early, still young Hafez had some education in Persian literature, the sciences and Arabic. He must have studied Quranic sciences very well, since his title “Hafez” means one who has learnt Quran and knows it by heart. Some sources believe that due to poverty, he has to work as a baker to earn his living. He also worked as a book copyist (mainly Quran). Later, for a while he was chosen as the court poet for several rulers of Shiraz until he was fell out of the favor of the court. He was almost certainly married and has a son who died early. Unlike his globetrotter fellow Shirazi poet Saadi, Hafez never left Shiraz except for two trips that he was forced to make. One when he was exiled from Shiraz because of opposition to his singular behavior when he had to stay out of town until the situation cooled down. Second trip was to the port of Hormoz, on the Persian Gulf, where he went to travel to India after an invitation from the Sultan of Bengal, but a stormy sea changed his mind and he returned to Shiraz. Hafez was undoubtedly a Sufi but he seems to rise above the views of his coreligionists and took upon the world from a wider point of view. The views about Hafez range from a saint to sinner, pious to atheist. Some regards him as one of the “Friends of God”, a person who speaks the language of the angels, others accuse him of heresy and hypocrisy. Now the question is how such a controversial poet as Hafez became Iran’s most beloved poet. The answer is that his word is a mirror in which many sorts of people can recognize themselves. His verses reflect and crystalize, more than any other book in the Persian literature, the moods, desires, sorrows and deep problems of Iranians.

Cupbearer, arise and give me the cup of mirth,

Bury the grief of time beneath the dark earth;

Lay the balmy wine on my palm and I will tear apart,

The deceptive blue garment of the Sufi upstart;

Although wise men consider me of ill fame,

Neither reputation I seek nor a good name;

The Tomb of Hafez

It is said that when Hafez died, it was refused to have Hafez buried in a Muslim cemetery because of his anti-orthodox, sensual poetry, however after an oracle, taken from his poetry, they finally agreed to a proper Muslim burial. It is believed that this was the origin of the tradition of asking Hafez for good advices or Fal-e Hafez. Since then, his tomb has been visited by his followers and lovers of his words. The tomb of Hafez or “Hafezieh” is considered the heart of Shiraz. The tomb of Hafez was changed and repaired repeatedly but its present form was acquired during the years 1935 – 1937. It was designed by Andre Godard, French architect and the first director of the Iranian archaeological society. The northern and southern sections of the mausoleum are divided by a columned staircase, which symbolizes a border between the earthly world (southern section) and the world of Hafez (the northern section where the tomb is located). The tomb is covered by a beautiful, strange copper dome, which looks like the Sufi’s hat and the ceiling beneath is decorated with mosaic tiles.

The best time of the year to visit the Tombof Hafez is spring when the citrus trees blossom and create a magical atmosphere. First, visitors go to the tomb, touch the tomb stone and pray for Hafez. Then they go sit somewhere and read his poems. You can buy the “Divan of Hafez” in different languages from the bookstores of the mausoleum.

When you pass my tomb, ask for grace,

It is a shrine where the drunkards abound;

Shiraz City Tour of PackToIran includes visiting the top touristic sites of Shiraz from different eras, like the Jame Atiq Mosque of Shiraz, Naranjestan Palace, and the Tomb of Hafez.