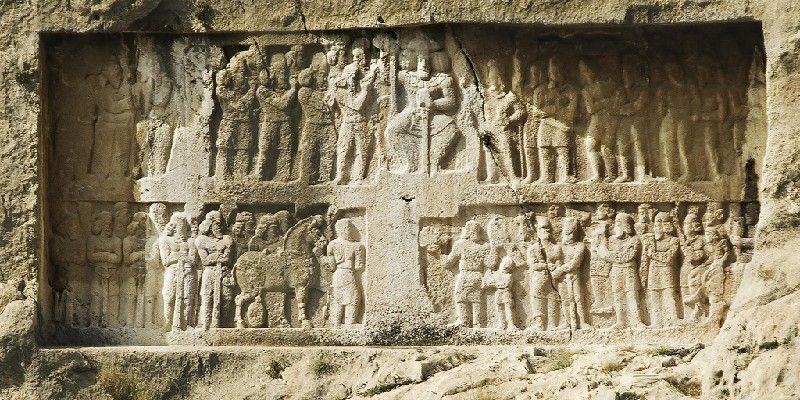 The ancient city of Bishapour

Constructed during the Sassanid Era by Shapour the king, the ancient city of Bishapour (Bishapur) is a UNESCO World Heritage Site located in Fars Province.

Being located 140 kilometers away from Shiraz around the city of Kazerun, the ancient city of Bishapour (Bishapur) was once one of the biggest and most important cities of Iran during ancient times and although it not as famous as the Persepolis, it is one of the most amazing ancient attractions in Iran which is worth visiting. Bishapour was a 200 hectares’ city which was built by mountains and lofty hills during the Sassanid Dynasty and is one of the few cities which have been mentioned in ancient inscriptions. This great city is assigned to Shapour I, the second Sassanid king of Iran who ruled this empire. This city was built around 241 to 272 AD by an architect named “Apasai”. After the battle between Iran and the Rome Empire and the victory of Shapur the Great over valerian the empror of Rome, he commanded the Roman soldiers to build this great city on the road connecting Persepolis and Ctesiphon and named it Bishapour. This city was constructed by a river and a fountain which was a rich water source for the city, and the people living in this city transferred water to the city with canals.

The Sassanid Archeological Landscape of Fars Region, including eight archeological sites in the southeast of Fars Province that date back to the Sassanid Era, was inscribed as a human heritage by UNESCO, and the ancient city of Bishapour with its amazing sections mentioned below is one of the most important ones that travelers should visit in Iran.

The most important monument in Bishapour is the Temple of Anahita, which was a holy place for praising Anahita the goddess of water, as water was a sacred item in ancient Iran. The walls, the mysterious corridors, the vaults, and the stairs of this monument are all built with large rubble stones and half of the construction is dug into the ground. This Anahita Temple which is one of the best samples among all of the Anahita temples of the world, is also one of the top architectural masterpieces of the Sassanid Era.

There are two nine-meter-high stone made columns located right at the center of the city where the two main roads meet. These two columns are valuable historical sources as there are Parthian, Pahlavi, and Sassanid inscriptions are on them. It is believed that a statue of King Shapour I was located between the two pillars, and was gradually destroyed during centuries.

The remains of stone made walls and vaults in a vast area (about 780 km) is known as the Ceremonial Hall of Shapour, where he accepted official visitors and guests. This glorious hall has a four-iwan plan and it used to be covered with a lofty dome.

Just beside the ancient city of Bishapour there is a deep gorge with high rocks where you can see six bass relievs related to the 3rd and 4th centuries that reveal a lot about the events wars, and the victories of Sassanid kings over enemies and are great samples of Iranian ancient art.

The bass relieves of Tang-e Chogan include:

1- This bass relief is located on the right side of the gorge and shows the coronation ceremony of Shapour I, while Ahuramazda handing him the reign of power, Philip the Arab kneeling infornt of him and Gordian III under his horse.

2- The seconf bass relief on the right side shows tht victory of Shapur over three Roman emprores; Gordian III, Valerian, and Philip the Arab. This bass relief which is the best preserved one in centuries, also shows the queue of soldiers and courtiers.

3- This bass relief is located on the left side of the gorge and is the most crowded one with 115 characters. It shows the victory of Shapur over the romans, the Iranian army accompanying the king and the romanarmy presenting gifts to Shapur.

4- The fourth bass relief located on the left side shows the victory of Bahram II over the Arab Sheikhs and the Arab Sheikh bringing him horses and camels as presents.

5- The next bass relief shows Bahram I receiving the reign power from Ahuramazda. This bass relief is known as the best one in terms of artistic skills as it shows beautiful details from the clothes to mussles of the horses.

The Cave of Shapour

About 5 kilometers away Bishapour, there is a tunnel cave located on a 400-meter-high mountain located on the two sides of a wide valley, and this cave is known for having a large statue of Shapour at its entrance. This statue is 7 meters high and 2 meters wide and shows the king with long hair, beard, mustache, big eyes, a crown, weapons, and army outfits. Visiting this cave which is an amazing natural and historical attraction requires about 1.5 hours of trekking.

Since Bishapour is located in the south of Fars Province where the weather is warm, you can visit this ancient site almost all year along, except summer when the weather gets very hot. In spring the weather is so fresh and the landscapes on the road which passes through Zagros mountains are lush and scenic, and in winter the plains are covered with aromatic narcissus flower. It gets two hours of driving to arrive Bishapour ancient site from Shiraz. You can take a private car from Shiraz to Bishapour, or you can ride a public bus from Shiraz to Kazerun and then take a taxi from Kazerun to Bishapour. For making this visit easier, PackToIran has designed a one-day Bishapour Tour, including a private car, entrance fee, professional English speaking guide, and a snack. Contact us and book Bishapour Tour!