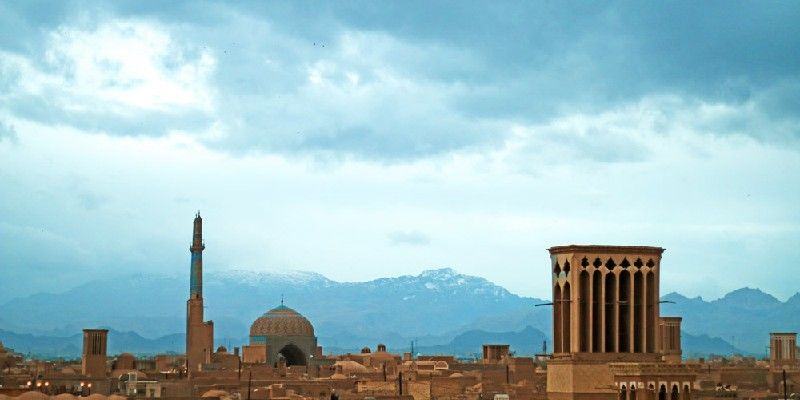 What are windcatchers (Badgirs) in Iranian architecture?

The traditional architecture of Iran especially in the eastern and southern cities is usually characterized by an architectural element named Baadgir (windcatcher), which is used for air conditioning and comes in different types.

What are the windcatchers?

Besides the turquoise domes and the genius system of Qanat (water wells), Badgir is another token of Iranian architecture. Windcatchers (Badgirs) are towers constructed on the top of houses, Ab Anbar (water reservoirs), and mines for sending fresh air to the lower floors and basements to speed-up the air conditioning process before the invention of air conditioners. People also used to keep their corruptible food under the wind catchers before refrigerators were invented.

We don’t exactly know when and in which city of Iran constructing windcatchers was started, but Iranians first came up with this genius idea many years ago and sent it to other countries in the Middle East and Africa. Windcatchers are still practical in desert cities in central Iran like Yazd, Kashan, and Kerman, and southern cities and Islands with tropical climates like Bandar Abbas, Qeshm Island, and Bushehr.

Although the method of building a windcatcher varies in different cities of Iran, they usually have a square plan with holes in the walls and are made with adobes. Inside the windcatchers were divided into different sections with a septum and X shaped boards. Traditional architects build windcatchers on the roof of houses, on the top of small rooms which are assigned to the windcatchers. Considering the direction of the wind in each city Badgirs are made with windows on one side, four sides, or eight sides. For example, all of the wind catchers in the city of Yazd have eight windows, while the ones in Meybod which is a city 50 kilometers away from Yazd have only one window, which is back to the dusty and hot desert winds blowing in this city. The windcatchers also function as chimneys for the houses and help the warm and dusty weather to ascent up and exit the house, so that fresh air gets circulated in the room.

The exterior of the windcatchers are usually ornamented with decorative elements of the area like stucco works, brickworks, and tile works and double the beauty of these traditional towers.

Yazd, the city of windcatchers

Located close to the Spice and Silk Road, the beautiful city of Yazd is known for its historical district which is inscribed as a World Heritage by UNESCO and consists of earthen houses, narrow lanes covered with arcs, and windcatchers. The 33.8-meter-high windcatcher located on the top of the pavilion inside the Dowlat Abad Garden of Yazd is the loftiest in the world. Since this city has always had an arid climate with a very little rainfall, the residents came up with new solutions to struggle with the heat and drought, and today their developments like Qanat, Badgirs, high earthen walls and narrow lanes which make shadows, are the reason why this city has become a top travel destination in the world and one of the cities which is included in almost every Iran trip itinerary.

So while you are in Iran, do not forget to spend a couple of days in Yazd to enjoy its wonderful beauties and learn about the secrets of its traditional architecture and windcatchers.