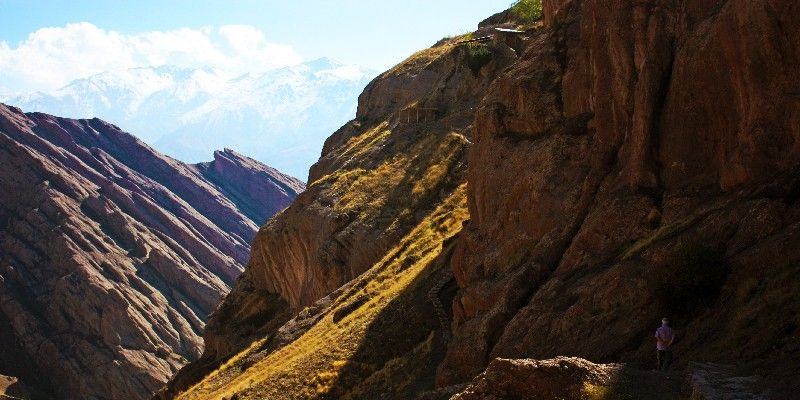 Alamut Castle - Castle of the Assassins

The Alamut Castle is a historical castle used as one of the headquarters of the Assassins in Iran.

Located on the impassable and lofty rocks of Alburz Mountain Range over the green plains and charming villages of Qazvin Province, the Alamut Castle is one of the most spectacular architectural and historical attractions that you should visit in Iran. This historical castle was used as one of the headquarters of the Assassins in Iran.

Hassan-e Sabbah, known as the “Man of Mountains”, was the founder of Assassins (Hashashion) in Iran who got exiled from the land of Persia and sheltered in the mountainous lands of Alburz Mountain Range, in the north of Iran.  Hassan-e Sabbah and a little group of followers accompanying him, constructed this immense and impenetrable fortress and stayed there for 35 years to propagate Ismailism and study astronomy, mathematics, geometrics, and philosophy. The Alamut Castle was finally burnt by the Mogul King, Holaku Khan, who ended the activities of Hassan-e Sabbah and the Assassins.

The Alamut Castle was built over a giant piece of rock over the Alamut Valley. The whole construction is made with stone, brick, and plaster and includes three remaining towers, two main halls, a 6-meter hidden entrance tunnel, and cisterns through which water was transferred to the castle. Since this was a military fortress, it has no architectural ornaments, and the walls were built according to the angle and natural shape of the rock it was built on. There are also some ditches around the castle which prevented the enemies from reaching the Assassins. This castle was completely abandoned after the Mogul’s attack, but then it was used as a prison during the kingdom of the Safavid kings.

With only 4 hours of driving from Tehran, you can get to this amazing area. For reaching the mysterious Alamut Castle, visitors must take a trekking route to the top of a 200-meter-high hill with steep stairs, where this monument is located. This is a scenic trekking route with amazing landscapes of green trees, the turquoise Ovan Lake, and farms of Gazarkhan Village.