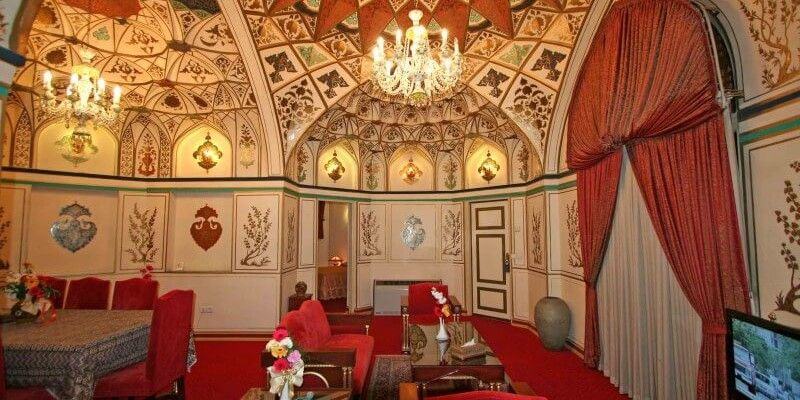 Isfahan Abbasi Hotel - one of the best hotels in Iran

The luxurious 5 -star Abbasi Hotel of Isfahan is one of the top luxurious hotels in Iran. For receiving more information and booking the Abbasi Hotel PackToIran team is available as an Iranian tour operator.

Abbasi Hotel of Isfahan is one of the top luxurious hotels in Iran because of being located in Isfahan’s touristic area and its original Safavid architecture. Abbasi Hotel is originally a historic caravanserai which is turned into a modern accommodation today.

Abbasi Caravanserai was built around 300 years ago by the order of the mother of Shah Sultan Hossein the last Safavid Kingdom beside other monuments like a small bazaar and a theological school (Madrese Madar-e Shah), and it provided shelter for merchants and also for the camels and horses they used to help transport their goods. This glorious caravanserai and other monuments around it were ruined by the Afghan invaders who defeated the Safavid Dynasty. In the 1950s French archaeologist André Godard and his team, working in Iran at the time, started the restoration of the caravanserai, considering the Safavid architecture style and ornaments. This eye-catching building was finally reopened as the luxurious 5 -star Abbasi Hotel of Isfahan in 1966.

With a high rate and standard service, this atmospheric hotel is a uniquely Persian building. Hallways are lined with authentic miniature paintings, the ceiling of the lobby is finely detailed and the dining areas decorated with beautiful mirror work, glittering chandeliers, and exquisite colorful wall motifs often associated with romantic notions of "the orient." The hotel has around 225 rooms, including 23 suites (including Safavid and Qajar Suites which are superbly restored and are decorated in an elegant traditional style without being overloaded), and is divided between the hotel's old wing and a new wing. The rooms in the new wing which were built in the 1970s are rather characterless. it seems that the re-creation of the hotel's original look and feel was not a priority at the time of construction and the rooms are bland in color and nondescript. What really makes the Abbasi Hotel special is its open-air courtyard. It's a large, beautiful, well-maintained Persian garden, complete with little fountains, small stream-lined avenues, bright flower beds, quince, and persimmon trees. People spend their time drinking tea, reading a book, or just hiding away from the hustle and bustle of the city in this oasis.

According to the season and room types including single, double, triple, suite rooms, and garden view rooms Abbasi Hotel price differs from 30-40 USD to 130 USD. For receiving more information and booking the Abbasi Hotel, PackToIran team is available as an Iranian tour operator.