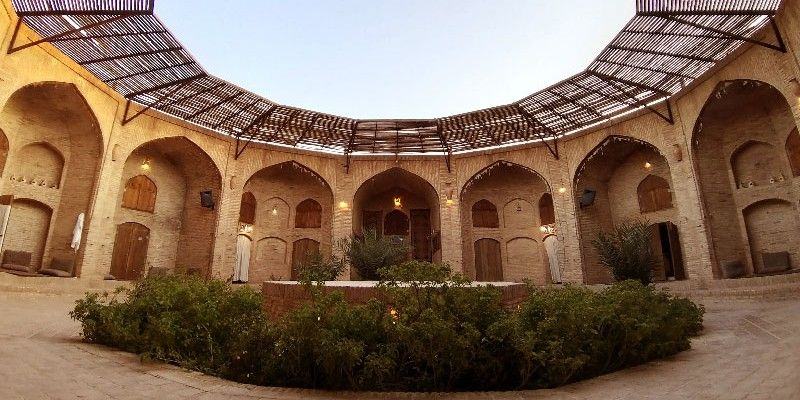 Zein-o-Din is a stunning caravanserai located in the heart of deserts of Yazd Province 60 kilometers away from the city of Yazd and is one of the most famous caravanserais of Iran which is still in use as a unique accommodation for travelers.

Caravanserais were roadside inns where travelers and caravans used to take a rest and spend the night after day’s journey, communicate with other travelers, and even trade some goods. Historical caravanserais of Iran which hold many stories from the guests who spent a night and continued their journey the day after, are spread all over this country especially on the Silk Road route which passed through Iran and connected China to the west of the world. Caravanserais, which are usually constructed with adobes and earth, are rectangular areas with a central courtyard surrounded by small rooms for accommodation.

Zein-o-Din (Zeinoddin caravanserai) is a stunning caravanserai located in the heart of deserts of Yazd Province 60 kilometers away from the city of Yazd and is one of the most famous caravanserais of Iran which is still in use as a unique accommodation for travelers.

Zein-o-Din Caravanserai was built during the Safavid Dynasty when Shah Abbas built 999 caravanserais on the Silk Route in Iran. This is the only circular monument left on the Silk Road route in Iran. The architect of this caravanserai was Mr. Mohammad Sultan Yazdi, who was one of the best architects of the time and also designed the Ganjali Khan complex of Kerman. According to history books, the Zein-o-Din Caravanserai was built in honor of Shah Abbas’s visit to the region for meeting Ganj Ali Khan, the governor of Kerman during the 10th century Hijri. This construction was used as an accommodation for the gunners and the military guards. Zein-o- Din caravanserai got reconstructed by Emami brothers about 20 years ago and received the prize of the best reconstruction from UNESCO in 2006, and got introduced as one of the top places to visit in central Iran by the Lonely Planet.

As mentioned above, Zein-o-Din is one of the most unique caravanserais in Iran, and that is because of its architectural plan which shows a circular building from outside and a dodecagon shape from inside. There is no other similar construction available except a ruined caravanserai on Kashan-Natanz road. This construction is built by bricks and the entrance of the rooms around the central courtyard are ornamented with well-formed arches. After passing the entrance gate on the south of the building, and the Hashti (the vestibule or a small space leading to a larger space), you’ll enter the round space which is originally a dodecagon surrounded by brick-made porticos leading to the small rooms, where travelers stay. The Hashti (vestibule) is continued by two long corridors that pass behind the rooms. These corridors were used as horse stables. The room on the north side of the caravanserai was the Shah Neshin (a room used by the kings and governors) is characterized by its high ceiling and ornaments including Karbandi and stucco works. Other parts inside the building are decorated with brickworks which is beautifully laid out based on the dodecagon shape of the construction. This building is fenced by 5 brick towers that are attached to the 8-meter-high walls, which has resulted in a unique shape of architectural plan. There are two stairways on the two sides of the building which lead travelers to the caravanserai’s rooftop, where they can enjoy the desert landscape, the sunset and the mysterious million-star sky at night.

Today Zein-o-Din Caravanserai is renovated and is used as a wonderful inn or desert hotel in Iran with capacity for 100 travelers. With 33 rooms, free breakfast, and simple yet good facilities like mattresses for sleeping and clean public toilets, Zein-O-Din is one of the highlights of Iran desert tours as it lets travelers experience the way caravans made journey through the endless deserts. The tranquility and the silence of the desert where the caravanserai is located, the delight of watching the sunrise and sunset from the top of the building, where nothing disturbs the view, and the historical value of the caravanserai are the reasons why staying at Zein-o-Din is a highly recommended experience in Iran. If you are interested in deserts of Iran and amazing experiences like staying at Zein-o-Din Caravanserai for a couple of nights and enjoying the beauties of desert, book this by a few clicks on our website.

Spring is usually considered as the high season and the best time of year for visiting Iran, especially the top spots in central Iran, and Yazd and Zein-o-Din are not exceptions. during spring, the weather in this area is pleasant and you can enjoy a mild temperature in daytime and night. Although the weather starts to get warm as spring ends, you can still spend time in Zein-o-Din until late June, however it gets very hot and dry during July, August and September. The next good season for spending some nights in this caravanserai is from October to late November.