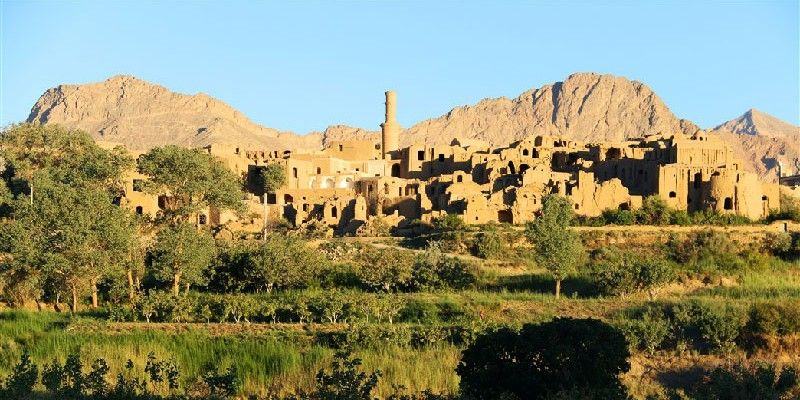 The historical village of Kharanagh which is located in Ardakan County in Yazd province is one of the most important and most attractive villages of Iran that shouldn’t be missed visiting when you travel to Iran.

The mud-brick Kharanagh village (Kharanaq) is located 85 kilometers from the city of Yazd in a mountainous and cool area and this explains the rich flora and fauna and the cool weather. Today Kharanagh is divided into two old and new parts and around 435 residents are living in its newly built houses, but the historical section, which is now completely abandoned, is home to numerous historical monuments which are located on the foothills of the mountains and zig-zag alleys.

Things that should be visited in Kharanagh Village are:

The Kharanagh Castle is the most significant attraction of the Kharanagh Village which dates back to the pre-Islamic Era, and is believed to be constructed during the Sassanid Dynasty (1800 years ago), when the locals decided to build a great fortress where they could shelter from enemies and robbers. The fence and barrier around this construction doubled the strength and the safety of the castle against earthquakes and the enemies who invaded the city during the times of wars. Also, just like many other castles, deep ditches were dug around the castle so that the enemies can’t enter and harm the residents. The Kharanagh Castle has six watching towers and about 80 residential houses most of which are one, two, or three floor buildings according to the economic and social level of the residents.

Kharanagh village was located on the way of caravans and travelers who made long journeys and this historical caravanserai was built during the Qajar Dynasty to be a place to accommodate travelers as a safe place. The big number of rooms and arcs in this caravanserai prove that Kharanagh was a busy place where many travelers used to stay. After being used as a caravanserai for a long time, this construction gote damaged and ruined however it got repaired and restored and is now used as a traditional hotel, where travelers can book a room and experience a memorable night in this historical village which offers peaceful silence and starry sky at night.

Literally meaning shaking minarets, Monar Jonban (Monar Jomban) is a type of tower which is known for being shaken without getting ruined. The most famous Monar Jonban of Iran is located in the city of Isfahan, however there is one Monar Jonban located in Kharanagh Village. Dating back to Sassanid Era, this Monar Jonban is a three-story construction with a spiral stairway. This amazing construction is 15-metere-high and it was used as a watching tower to observe the area around the village and a lantern for finding the way to village at night.

Constructed during the Sassanid Dynasty, the Kharanagh Bridge is the only bridge built over a seasonal river in Iran, which is 22 kilometers long. With 40 meters length and 7.5 meters height, this bridge wasn’t used for passing over the river and it was an aqueduct to divide the water during the rainy season and transferring water from the Qanat (underground water wells) to the gardens and farms one the other side of the river. The architecture of this unique bridge shows the combination of Sassanid and Roman architecture styles.

Water reservoirs used to play a very important role in the life of the people who lived in dry areas and deserts. The locals piled the snow they brought from far mountains in Ab Anbars, so that they can access clean water during summer. The Kharanagh historical Ab Anbar is constructed by the order of Shah Abbas I and is one of the attractions of this village.

Bathhouses are among the most amazing architectural attractions in Iran, and there is a historical bathhouse in Kharanagh Village which was constructed during the Qajarid Dynasty. This bathhouse was made of bricks and the building is topped with a large dome with tiny windows through which the sunlight shines into the building and provide light and warmth. During the daytime, the bathhouse was used by the women of the village, while it was used by men during evening and night.

Just like many places in Iran, spring is the best time of year for visiting the ancient Kharanagh Village, as the gardens of the village are green and lush and the weather is mild and pleasant. You can also travel to this village during autumn and enjoy visiting it while the weather is mild. Since Yazd Province is located in the Central Desert of Iran, this area is warm during summer and the hot sunlight may make exploring this attraction less pleasant. Also, if you are going to visit Kharangh during winter do not forget to take enough warm clothes.

Tips for visiting the Kharanagh Village