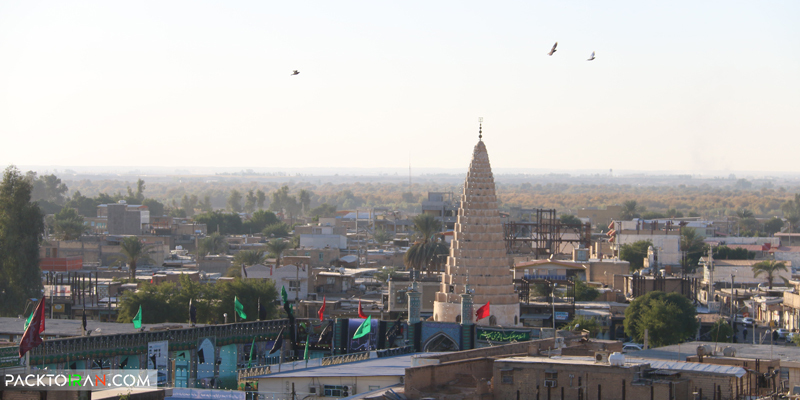 The Ancient City of Susa - City of Earliest Civilizations

Susa or Shush is the center of Shush Town in Khuzestan Province in southwest of Iran. This city was one of the centers of Ilamite civilization and one of the oldest cities in the world.

The ancient city of Susa was one of the centers of ancient civilizations of the world, the capital of great Ilamite Empire, and also the winter capital of the Achaemenid Dynasty for 3000 years, and the oldest city of Iran according to historical evidence. It has also been a populous and big city during Sassanid era and early Islamic era, until the invasion of Mongols.

Susa is located 120 kilometers away from Ahvaz, the center of Khuzestan Province. Three main rivers of Shavor, Dez, and Karkheh that pass this area, have caused Susa to have a lush nature with enough water resource and become a booming agriculture area, with rich flora and fauna. The historical site of Susa got inscribed as a UNESCO World Heritage Site in 2015, and was the 18th heritage of Iran registered on this list. The ancient site of Susa includes Shaor Palace, Apadana Palace, eastern gate, Hadish, Susa Jameh Mosque, Islamic era constructions, and French Fortresses. When Susa was excavated during Qajar era (18th century), nearly 400 hectares of this area got designated as the ancient site of Susa, but according to the later archaeological surveys this ancient site got introduced as an 800 hectares’ area. Visiting Susa is like traveling back in time. You will step into temples of Ilamite civilization, and explore the history of Achaemenids in remains of their palaces.

Places to visit in Susa

One of the most important historical places of Susa is Apadana Palace, which was built between 521 to 515 BC by the order of Darius the great, the Achaemenid king. This palace was constructed on the remains of some heritages left from Ilamite civilization. This palace was a glorious and great construction made of bricks with large stone pillars. The interior walls were covered with glazed bricks ornamented with legendary motifs of winged lions, soldiers, lillies, etc. This palace consists of different parts including public hall, entrance gate, central courtyards, and etc. Unfortunately, the Apadana Palace of Susa got ruined by the order of Alexander the Great and it got excavated many years later.

There are many archaeological mounds in Susa left from ancient era, like Band Bal Mound, Acropol Mound, and Jooy Mound. The Haft Tappe Archaeological site is one of the most important archaeological sites of Iran which consists of different mounds, and is located in southeast of Susa city.

The most significant attractions in the ancient city of Susa is the Ziggurat-e Chogha Zanbil, which got inscribed as the first UNESCO World Heritage Site in Iran in 1979. This immense and wonderful temple is the only heritage left from the Ilamite city of Dur Untash and the only Ziggurat out of Mesopotamia, which was constructed in 1250 BC by the order of Untash Gal, the Ilamite king in honor of Inshushinak the god. This Ziggurat was a seven story building made of brick and adobe, and however today only five floors are left, it is a wonderful construction left from pre-historic Ilam civilization. Ziggurat-e Chogha Zanbil is located 47 kilometers away from Susa, and is one of the most significant and amazing UNESCO World Heritage Sites in Iran that shouldn’t be missed visited in Iran.

The Historical Castle of Susa also known as the Acropole Castle is another historical attraction in Susa which was built by Jacques de Morgan, the French archaeologist and mining engineer, near the ancient mounds as a resident for his team of French archaeologists, therefore, it was also known as the Castle of Frenchs. This castle is located on the highest spot of Susa city close to the Tomb of Daniel the Prophet based on a plan related to middle ages. A part of materials used for building this castle are from the excavations of Susa, like some bricks left from Achaemenid era, with Cunic inscriptions on them.

Tomb of Daniel the Prophet

One of the historical and religious attractions of Susa is the Tomb of Daniel the Prophet who is known as a prophet in Christianity and although it is not mentioned in Quran holy book, Muslims know him as a sacred prophet and Jewish noble man who got prisoned by Nebuchadnezzer in Babylon and then moved to Iran. Six cities in the world claim to be home to the tomb of Daniel the prophet, while Susa is the most likely to be where he got buried. Located by the Shavor River, the Tomb of Daniel is a wonderful architecture masterpiece with a unique conic shaped dome, which was an architect trend in Susa at the time of its construction.

Located in front of the Tomb of Daniel the Prophet and Susa Palace, the Museum of Susa was opened during the Pahlavi Dynasty. This museum is one of the most significant and amazing museums of Iran that exhibits objects from ancient civilizations of Iran like Ilamite, Achaemenid, etc. This museum is located in a vast garden and consists of six halls.

The best time of year for visiting the ancient city of Susa and exploring the historical attractions of this city and the vast land of Khuzestan is winter, when the weather is mild and pleasant. PackToIran team suggests that if you are traveling to Qatar in November 2022, make sure to visit the ancient land of Khuzestan after World Cup 2022.