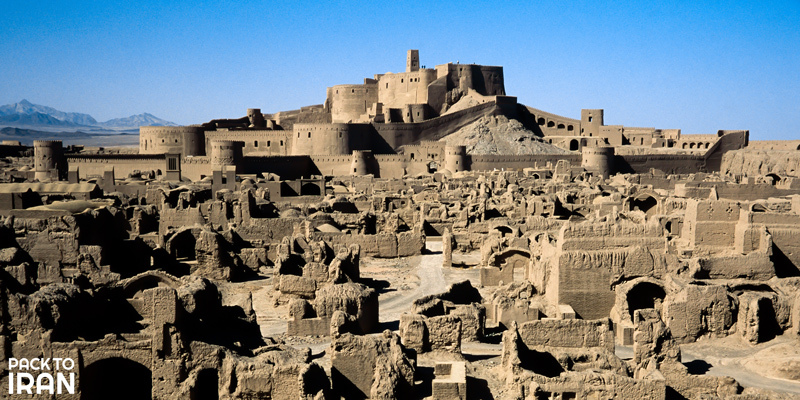 Bam Citadel and its Cultural Landscape - All you need to know

Bam Citadel is one of the most significant attractions of Kerman Province, located in the southeast of Iran at the edge of the Lut Desert, in Bam town. This unique adobe construction, which is among the world UNESCO Heritage sites of Iran, has a wonderful architecture and is an amazing sample of constructions that has been used as an impenetrable fortress in eastern Iran. Before the massive earthquake of 2003, the Bam citadel was the greatest adobe building in world. Bam Citadel was a small city, surrounded by a great wall.

The History of Bam Citadel

There are many assumptions about the history of the Bam Citadel and its cultural landscape. It is believed that its antiquity dates back to Achaemenid or Parthian era. Also, some of its buildings are related to Teimurid and Qajarid dynasties. According to historical documents, studies on some discovered adobes, and the shape of the central plan, the Bam Citadel was built two thousand years ago.

Actually, different layers of the walls and some parts of the fortress and also the difference between the style of architecture of different parts, indicates that this construction was renovated during eras of history of Iran. For example, the porch of the mosque is related to Seljuk era (11-12 BC), while the entrance arc resembles Sassanid architecture (224 – 651 AD). Studies on the Parthian capital, Nisa show the similarity between this ancient city and Arg-e Bam and strengths the idea that Arg-e Bam was built during late Parthian era or early Sassanid era.

Bam citadel is also mentioned in historical documents of Islamic era. During this new era of Iran’s history, some mosques and religious buildings were built in Bam complex and the historians believe that the two towers located on the entrance are related to Safavid Era. Yaqub ibn Layth al Saffari the founder of the Saffarid Dynasty (9-11 BC), captivated the governor of Taherian Dynasty and exiled him to Bam. It is also said that this citadel was used as a shelter for rebels like the Governor of Fars who sheltered here after getting defeated by the commander of Khalifa in early Islamic era. One of the most important historical facts about the Bam citadel is that Lutfali Khan Zand the king of Zand Era, escaped from Shiraz and moved to Bam citadel after he got defeated by Agha Muhammad Khan (the founder of Qajar Era), and Aqa Muhammad Khan massacred 600 prisoners cruelly. During its long history, the great Arg-e Bam was ruined because of wars, however it was renovated and used a residential city until 150 years ago, when people left the fortress and built new houses in palm tree gardens of Bam region.

The Architecture of Bam Citadel

The Bam citadel is a sample of the ancient cities with Hippodamus plans. Inspired by Parthian architecture traditions, the Bam Citadel was built on a high hill for a better control on the area and more difficult access of enemies. The perfect location of the fortress also led to a good air conditioning in this area which is known for its dry and hot climate. The experts believe that the connection between the residential districts of the fortress and how they were built on the steep leading to the great castle located on highest spot, shows the value of Arg-e Bam for its perfect urban designing, architectural design. Because of its strength and glory, it was titled as the God-made Castle during Qajar era. This 2500-year-old fortress is made with clay, rubble stone, adobe, and straw.

Different Parts of the Bam Citadel

The administrative part is located on the north side and includes different parts like the governor’s house, barrack, water wells, the main tower, etc. The Four-season edifice, which is one of the highest parts of the fortress, was a three-story building used for city organisations.

This area which was separated from the government are by a high wall has different parts including public buildings.

The horse stable was big enough for keeping 200 horses and was located by the second city entrance gate. The stalls and the beautiful stucco works related to Mongol and Timurid era, are still available.

The Rampart and Towers

The citadel is surrounded by a great and strong fortification including 29 watching towers with small windows for observing the city. Also, there were 76 watching towers scattered inside the city.