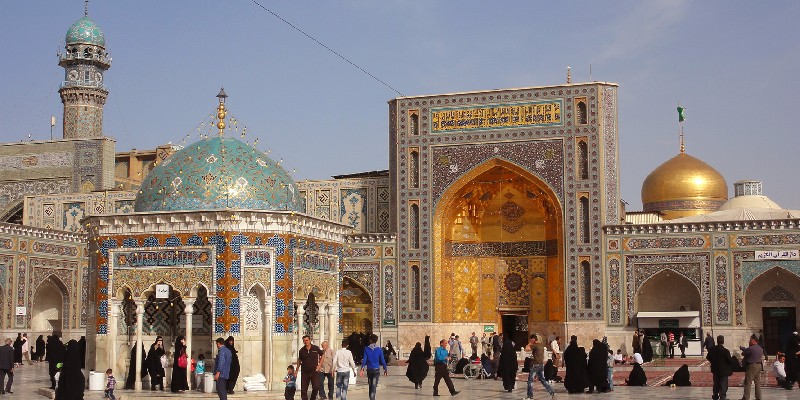 Top Places to Visit in Mashhad

Although the city of Mashhad and the Khurasan Province are not known as one of the top touristic cities of Iran, it has many cultural and historical attractions that make this city so worth visit.

Mashhad is the center of Khorasan Razavi Province in the northeast of Iran, and is the second largest and populous city of Iran. Mashhad is not also an important economic and political city of Iran, but also the most important pilgrimage city among Shia Muslims of the world because of being home to Imam Reza Holy Shrine. Mashhad and other cities of the vast Khurasan Province have very many valuable historical and cultural heritages and attractions, because of the rich history of this land and being located on the route of the Silk Road, one of the most important business roads of the world, through the history.

The shrine of Imam Reza, the eighth Imam of the Twelve-Imam Muslims is a sacred place among the Shia Muslims of the world, who travel to Mashhad for visiting and pilgrimage. The Imam Reza Holy Shrine (also known as Astan-e Quds-e Razavi) is not only a top pilgrimage place among Muslims, but also a magnificent attraction for any visitor. Imam Reza Holy Shrine is a vast complex that covers 19000 square meters, 1700 meters of which belongs to the holy shrine. This complex has many entrances, vast courtyard, mosques, museums, libraries, etc.

The Gowharshad Mosque is one of the most significant parts of the Imam Reza Holy Shrine located on the south of this complex. This mosque was built by the order of Gowhar Shad Beygom, the spouse of Shahrokh, one of the greatest kings of Teimurid era (1370 BC). With its delicate tilework, calligraphies, and architecture style, the Gowharshad mosque is a must-see in Mashhad and one of the most amazing mosques of Iran. The Gowharshad Mosque is open for visit from 9 am to 9 pm, and the entrance fee is about 6 Euros.

Nader Shah Afshar was the founder of Afsharid Dynasty and one of the most powerful kings of Iran during the history (1688-1747), described as the Napoleon of Persia because of many battles in the Middle East, Caucasus, India, etc. He chose Mashhad as his capital and built his own tomb in this city after returning from his battle in India, where he gained so much war booty. He ordered great pieces of black marble from Azerbaijan. Nader Shah built three tombs for himself during his kingdom, however he didn’t get buried in any of them until Qajar Era, when his bones got transferred from Tehran to Mashahd. Finally, a great tomb and garden was built for the king during the Pahlavi Dynasty to show his glory. The current tomb is a complex including a vast garden, great halls, and a museum known as the Naderi Museum, where weapons and objects from different eras are exhibited. This complex is designed by Houshang Seyhoun, the great Iranian contemporary architecture, and can be visited from 8 to 19:30 with about 6 Euros.

Ferdowsi is one of the greatest Iranian poets known for his legendary epic book named Shahnameh (Book of Kings), which took 30 years to finish. The Shahnameh is considered as the most significant resource of Iranian legendary stories and also inspiration for creating miniature paintings, Iranian stories, etc. The tomb of Ferdowsi, this great Iranian character, is located in Tus a town 20 kilometers away from Mashhad. Before the construction of the current monument, the Tomb of Ferdowsi was ruined and designed for several times. This great monument which got opened in 1934, was designed by Mr. Houshang Seyhoun based on a plan designed by Mr. Karim Taher Zadeh, and built by architect Mr. Hussein Lor Zadeh. The great tomb, which is a great marble construction, is built in an area about 6 hectares and includes a vast garden, a large pond, an iconic statue of Ferdowsi, and tomb of other Iranian great characters like Mr. Mehdi Akhavan Sales, a contemporary poet, and Mr. Muhammad Reza Shajarian, the legendaray Iranian singer.