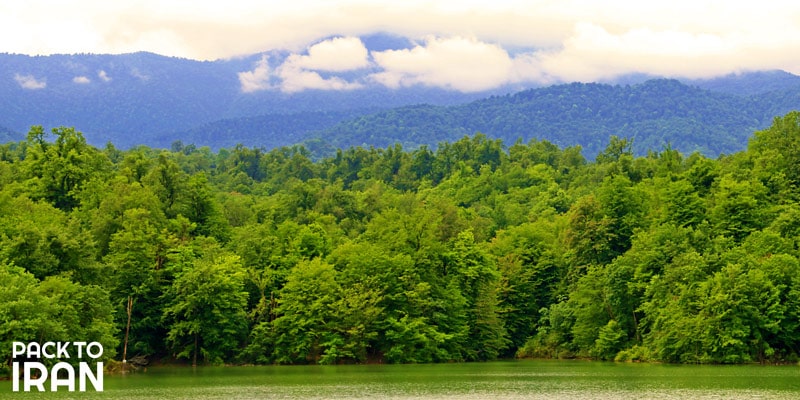 Hyrcanian Forests, the oldest forests of the world in Iran

Dating back to 25 to 50 million years ago, the Hyrcanian Forests of Iran are stretched along the southern coast of the Caspian Sea in the north of Iran and is a UNESCO World Heritage property. This wonderful natural attraction is a must-see that shouldn't be missed by nature lovers.

Covering a vast area in the north of Iran and Azerbaijan, the UNESCO listed Hyrcanian Forests are among the most important forests of the world which plays a very important role in ecosystem. Forests are important natural reservoirs of the earth and the countries with vast forests are valuable geographical regions, as forests are the main oxygen resource for all living creatures. The Hyrcanian Forests of Azerbaijan and Iran are among the most important biospheres in the whole world. These forests play such a vital role in creation of life that has caused it to be registered as a UNESCO World Heritage Site. This rich forest is home to a variety of plants and animals, some of which are extinct today. The rich flora and fauna of the Hyrcanian Forests is because of its special situation in the middle of the great Caspian Sea and the high Alburz Mountain Range which has created a suitable habitat for special and rare species, which are not found in other parts of the earth.

The geologists and scientists have estimated that the antiquity of this ancient forest dates back to third Geological time scale around 40 million years ago, which had caused it to be known as a vast natural museum with wonderful samples of fossils. The stunning Hyrcanian Forest is stretched from the northwest to northeast of Iran like a green strap, which is also one of the richest water resources in the world and also prevents floods in the north of Iran like a giant dam.

It is believed that the word Hyrcan is the old form of word Gorgan which is a province in northern Iran since old times, and also the name of an area in Azerbaijan with the same name. According to some documents and the rock inscriptions left from the Achaemenid Era, this region was named “Varkan”, but today considering the fact that this natural heritage is shared between Iran and Azerbaian, both countries agreed on the word “Hyrcan”. There are very few forests on earth with the same special features as the Hyrcanian Forests, like refining the air, its ancient history, and the diversity of rare plants, which all caused it to be registered as a natural UNESCO World Heritage in 2019.

The Vegetation of Hyrcanian Forest

There are more than 80 types of trees, 50 types of shrubs, and different types of local plants in the Hyrcanian Forest that do not grow anywhere but this forest. Scientists believe that many of the types of these plant would not survive in any other spot in the world. Although some parts of the forest have been damaged throughout history, there are still significant plant species that not only supply oxygen, but also have a significant impact on water reserves. Hyrcanian Forest is home to different broad-leaved trees, conifer trees, ever-green trees, that differ according to the altitude of forest. Some of the trees of this forest are maple, alder, Persian Ironwoods, etc. and bushes are cornelian cherry, wild plum, raspberry, etc.

The Hyrcanian forest has been home to numerous species of animals from 300 types of birds, to insects and 100 types of mammals, however, some of them have got extinct today. Some of the birds that are still available in Hyrcanian forest are eagles, owls, falcons, vultures, woodpeckers, pheasants, partridge, etc. and some of the mammals are brown bear, wolf, jackal, martens, badger, wild cat, etc. Some animals like red deer, roe deer, and wild goats do not live in this forest anymore, however they are still living in the Golestan National Park.

The stunning and untouched nature of the Hyrcanian Forest is one of the main reason why many travelers and nature lovers got attracted to this forest. The Hyrcanian Forest is the most significant potential of tourism in the north of Iran, and being close to the Caspian Sea has caused this region to be even more attractive. Also with its rich flora and fauna and many plant fossil, the Hyrcanian Forest is a great place for the geologists and scientist, as exploring it provides so much scientific information.

There are different regions in the Hyrcanian Forest that host travelers throughout the year. Here you can read about some of the most famous and safe Hyrcanian forests that you can choose as a destination. Some of these forests are registered as national parks and some other are protected areas.

The Alimastan Forest is one of the most scenic Hyrcanian forests in the north of Iran, known for its old and high trees, lost in fog, which creates a wonderful hiking and trekking route toward the Alimastan Mount. This forest is located by the Amol Town in Mazandaran Province and is called Alimastan because of a special plant named Alima, which grows here during spring. The best time of year for a trekking tour in Alimastan Forest is from late April to late June.

The Abr Forest is located between the Shahrud Town in Semnan Province and the Gorgan Province, and is known for its wonderful cloud phenomenon which creates an ocean of clouds under your feet. This forest is about 35000 hectares and is one of the highest regions of the Hyrcanian forests.

The Vaz Forest is located in Nur town of Mazandaran Province and is one of the most untouched Hyrcanian forests with amazing natural attractions. The beauties of the Vaz Forest get doubled during autumn, when the golden and yellow leafs create and amazing picture. There are villages around the forest that have many cozy ecolodges for stay.

The Lisar Forest is a protected area named after a type of tree named Li. The famous Subatan area, which is amazing for camping is located in this area. This forest is home to different species of mammals and and hunting birds.

The North of Iran Tour of PackToIran, is one of our unique tours which covers a vast area in the north of Iran and also some parts of the Hyrcanian Forest. Take a look at this tour and see if you are interested.