The Shah Cheragh Holy Shrine is a sacred and distinct place among the Shiite Muslims and a popular pilgrimage site for the locals of Shiraz. Apart from its religious value and sacredness, this shrine is a significant heritage in terms of artistic and architectural value, as its magical mirrorwork and tilework double the spirituality and glory of its atmosphere. The name of Shah Cheragh, which literally means “King of the Light”, refers to a local mythical story about an old woman who notes a light from afar once a week, and when she reports this to the king, they find out that this light shines above a place which turns out to be the grave of the old son of Musa Ibn Jafar (Musa al Kadhim). Then the king decided to build a fancy shrine over the grave. 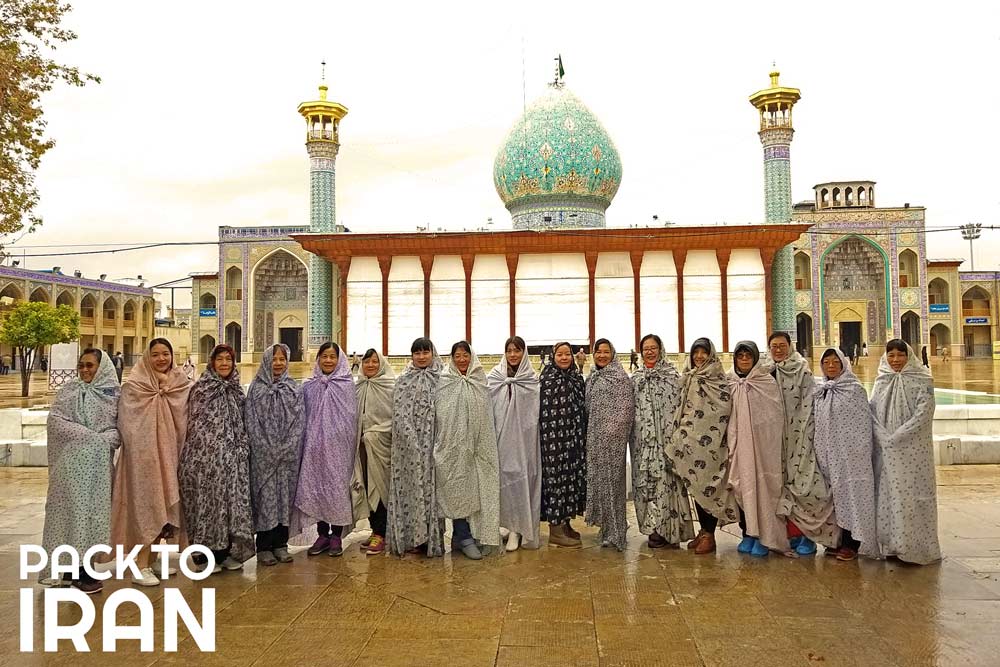 The construction of Shah Cheragh shrine dates back to the kingdom of Adud al-Dawla the emir of the Buyid Dynasty who ruled from 949 to 983. At first, the grave of Shah Cheragh was just a mound. During the reign of Salghurids, also known as Atabegs of Fars, the governor of Fars ornamented the shrine, constructed a dome over the top of the shrine and also made a porch.

During the Ilkhanid Era, Queen Tashi Khatun mother of Abu Ishaq Inju, who was a generous and religious woman, ordered the construction of a stunning monument with great ornaments for the Shah Cheragh Holy Shrine. This project which took five years to be finished, included adding a high dome and different sections like a mosque, a religious school, a roofed bazaar and a lodge for pilgrims and travelers. According to the travel book of Ibn Battuta every Monday night, Mrs. Tashi Khatun held religious ceremonies at Shah Cheragh Holy Shrine, where locals gathered and said prayers and then she offered free food to the poor.

During the Safavid Era (16th – 17th century) Shah Ismaeil renovated the shrine and during the Afsharid dynasty they added a gold chandelier, but later during the Qajar era this fancy chandelier was sold for amending the shrine that was badly damaged because of an earthquake. Also, Fath Ali Shah, the Qajar king spent so much money on renovating the shrine with standard materials and added a sliver Zarih on the tomb stone. The stunning mirrorwork of Shah Cheragh Shrine, which is a significant feature of this architectural masterpiece is a heritage left from the Pahlavi Dynasty, and the delicate exterior tilework which amazes every visitor is the work of Mr. Isa Bahadori the great Iranian carpet designer.

The architecture of the holy shrine is based on Azeri style which is one of the main Persian architecture styles and got prevalent during the Ilkhanid era. It has four alcoves (Shah Neshin) on four sides of the main courtyard which is 14000 meters in square. The courtyard has two entrances on the north and south with a large central pond. These two entrances connect this holy site to the other parts of the neighbourhood. The tomb of Ahmad Ibn Mousa is on the west of the courtyard and has three shabistans and the tomb of Seyed Mir Muhammad is on the northeast.

The main porch which was constructed during Qajar Era, is 38 in 5.5 meters with 10 columns and two corridors leading to the tomb. The ceiling of the porch is covered with wooden Muqarnas and amazing woodwork (Girih tiles) which is the art of creating Islamic geometric patterns by wood.

Zarih is an ornate lattice structure made over the holy graves in Islamic shrines. The current silver Zarih of Shah Cheragh is 226 cm in 358 cm and is ornamented with Persian and Arabic poems about Shia Imams, and a wooden box with hand-carved ornaments inside the Zarih is located on the tomb inside the Zarih.

The courtyard of Shah Cheragh Holy Shrine has six entrance gates. The first and main entrance located on the west is an octagonal shaped space and has two separate corridors ornamented with tilework and poem. By passing the entrance gate on the east you can reach the historical Jaame Atiq Mosque, and the northern gate, and the southern gate connect you to the bazaar, Zand Street, etc. 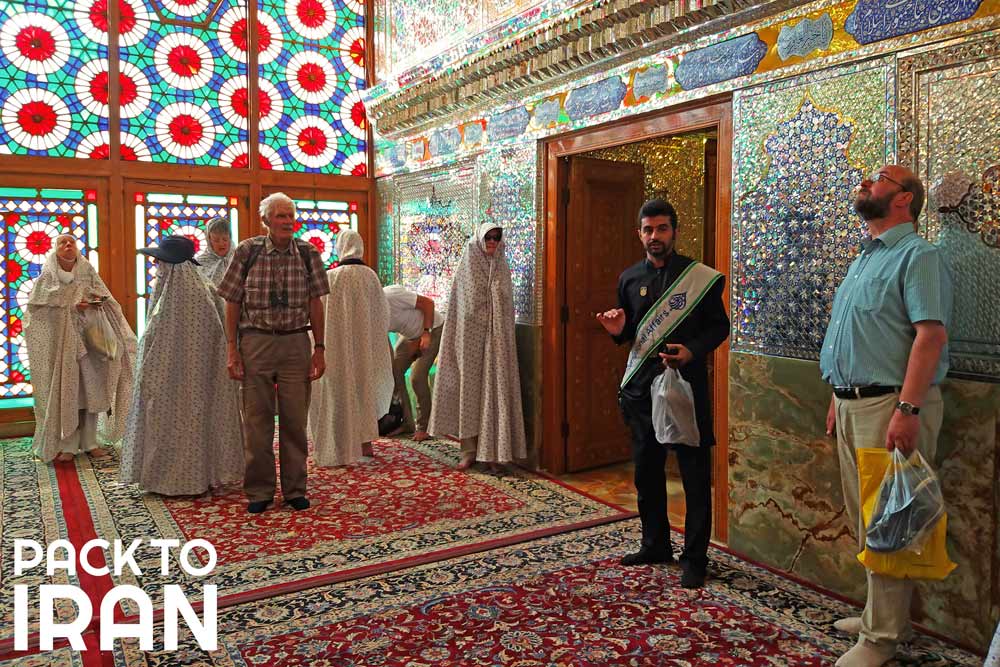