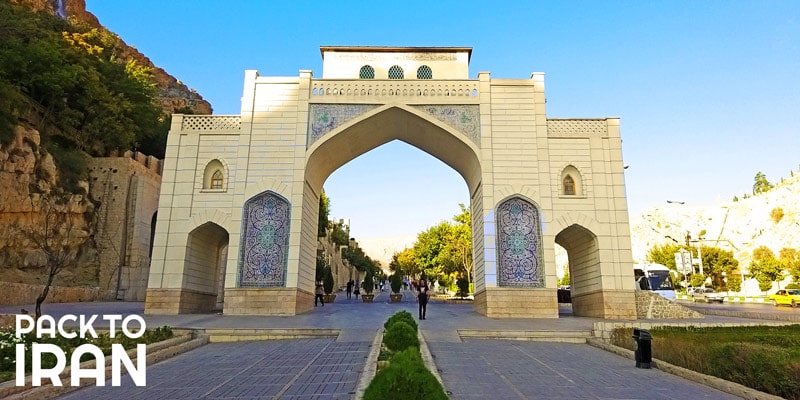 With its charming architectural design, delicate tilework ornaments, and friendly atmosphere, the Quran Gate is one of the amazing attractions of Shiraz, which is known as one of the icons of the city.

Located in the north of Shiraz, between the Chehel Maghan Mount and the Baba Koohi Mount, the Quran Gate or Darvazeh Quran is one of the historical gates of this city which is still one of the icons of Shiraz and has got renovated for many times throughout history in spite of getting damaged because of natural disasters. Known for its historical value and wonderful architecture, the Quran Gate is one of the attractions of Shiraz and must-see places of this city. 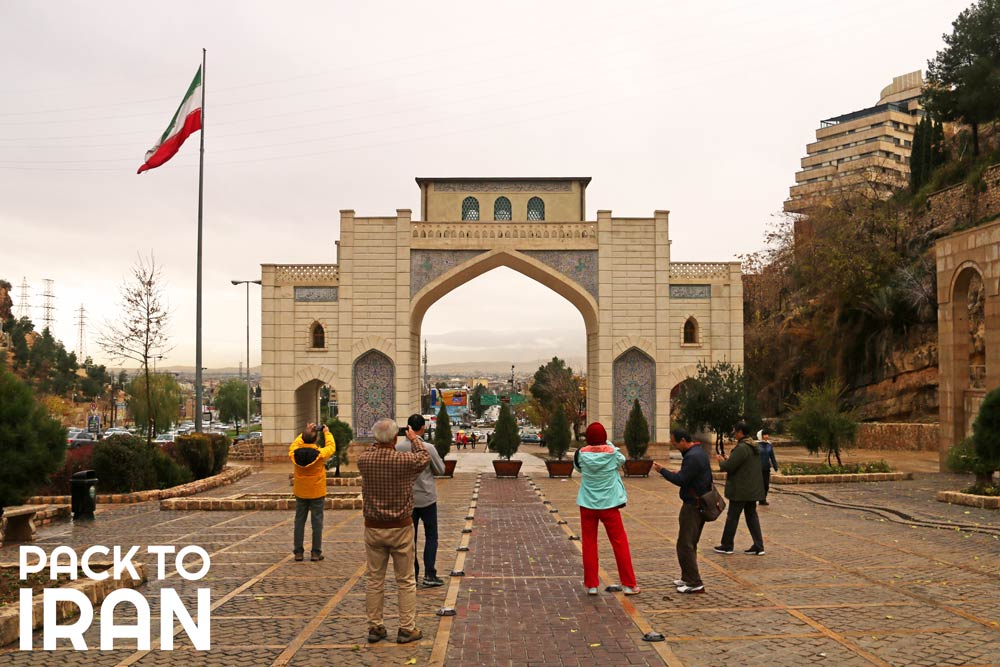 The History of Quran Gate

Since Quran has been the holy book in Iran with a special place in the beliefs and culture of Iranians since the entrance of Islam, there had been many Quran Gates built in different cities of Iran like Tehran which had three gates on the four sides of the city. These Quran gates were simple arc constructions with a special niche on the top for keeping one or some holy Quran books. Among the Quran gates of Iran, the one located in Shiraz is one of the most famous and oldest city gates. 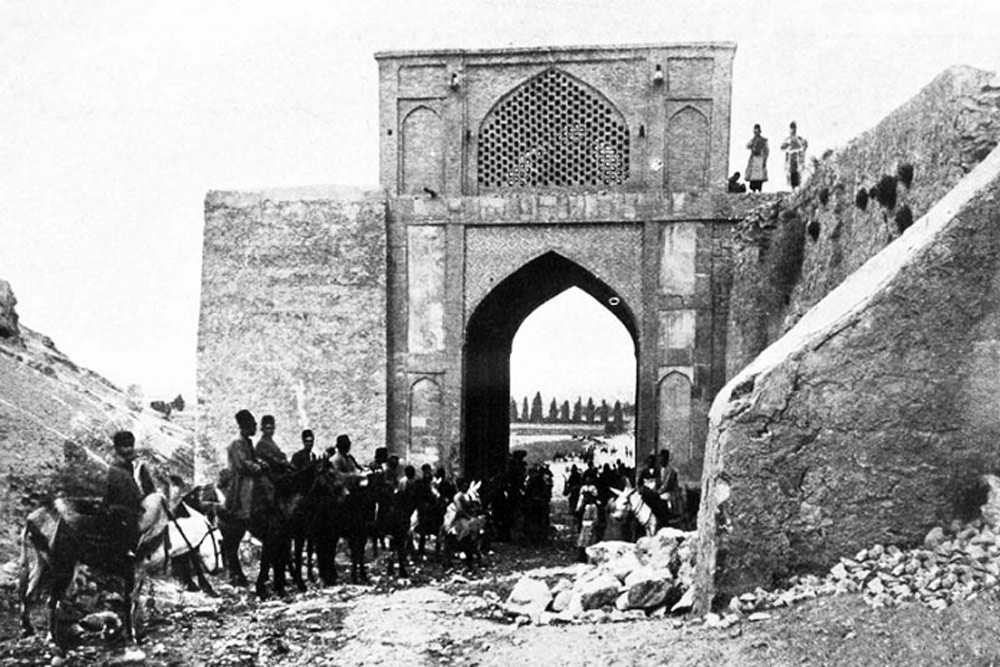 Shiraz has been one of the most important cities of Iran connecting different parts of Iran as a junction since ancient times until today. In the past, there have been eight gates on different sides of the city, however they were reduced to six gates during the Zand Dynasty, including: The Quran Gate, Isfahan Gate, Saadi Gate, Ghasab-Khaneh Gate, Kazerun Gate, and Shah Daei Allah Gate, however the Quran Gate is the only one which is still available. It was built during the reign of Adud al-Dawla the emir of Buyid dynasty in Fars Province from 949 to 983 and named Quran Gate because of the Quran book kept on the top of the construction to guarantee the safety of travelers and caravans passing through the gate.

This gate got damaged and ruined little by little, and it got renovated by the order of Karim Khan Zand, the king of Zand Dynasty from 1751 to 1779. They built a small room on the top of the construction and placed two handwritten Qurans in the room written by the great calligrapher named Sultan Ibrahim ibn Shahrokh Teimuri. Today, these Qurans are transferred and kept in the Pars Museum of Shiraz.

During the Qajar Era, the Quran Gate was damaged because of earthquakes, and Muhammad Zaki Khan Noori repaired the building and added two rooms on two sides of the arc to be used as watching towers. They also built a water cistern to collect the water of the Rokn Abad River for the travelers. It is said that, the locals of Shiraz used to pass through the gate on the first day of each month to be kept safe from the bad fortune. 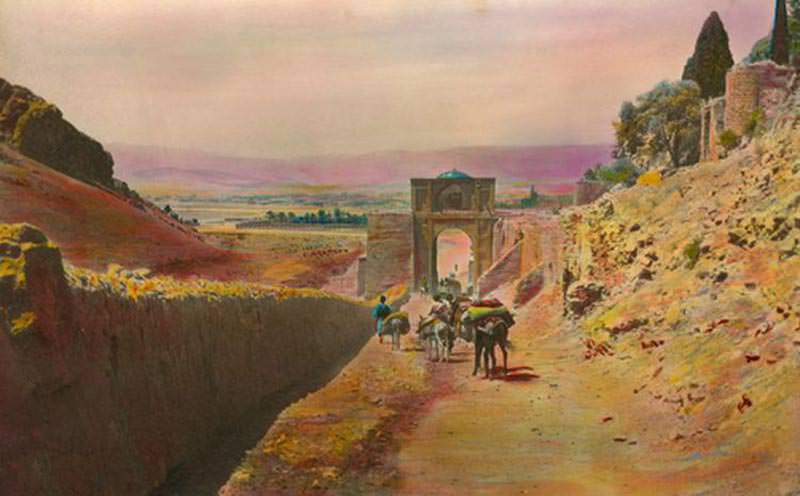 By the order of the municipality of Shiraz the Quran Gate was ruined by dynamite in 1936 because of road development projects and then in 1948, one of the merchants of Shiraz built a new Quran gate close to where the previous one was located. The new gate (current) was built larger than the old one, and the Quran book was kept on a rectangular room on top of the arc.

The architecture of Quran Gate

The Quran Gate, includes a main arc, two small arcs on the two sides, two small windows, and a small room with lattice work on its windows, where the holy Quran book is kept. The construction is made with large pieces of stone and is ornamented with tile works showing verses of Quran written in Naskh and Thulth, which are two of Islamic varieties of Islamic calligraphy, and also delicate arabesque and floral motifs. The lightings at night and its amazing visual effect on the construction double the beauty of the gate and its tilework. 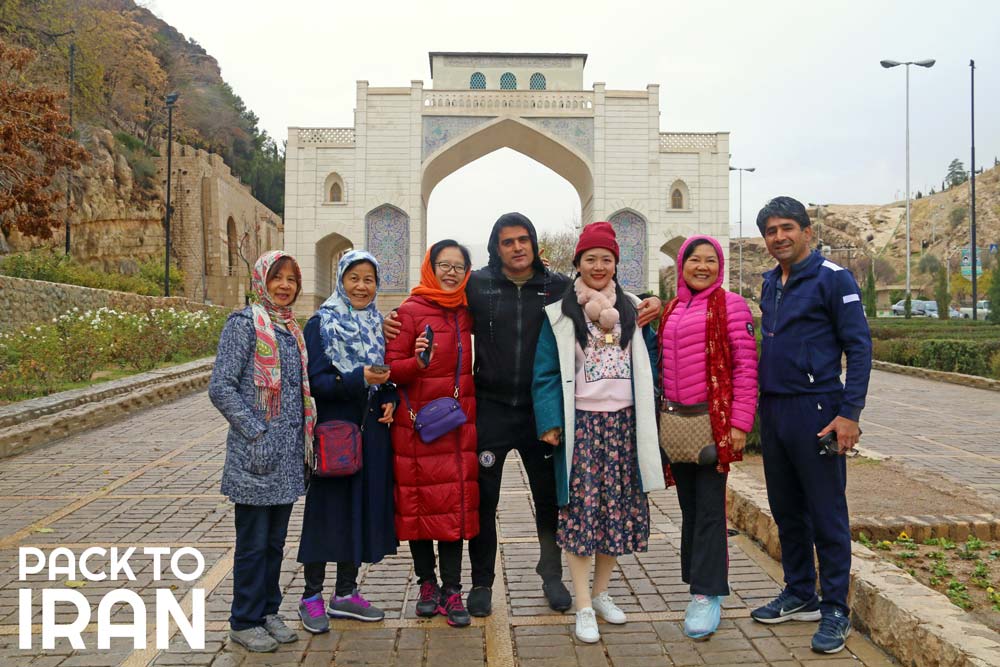 The Tomb of Khaju Kermani

Khaju Kermani was one of the Persian poets of the 13th century who was born in Kerman and passed away in Shiraz. It is believed that Hafez, the great poet of Shiraz was influenced by the philosophy and poems of this poem. Khaju Kermani was buried by the Quran Gate and today his tomb which has a spectacular architectural design is one of the attractions of Shiraz.