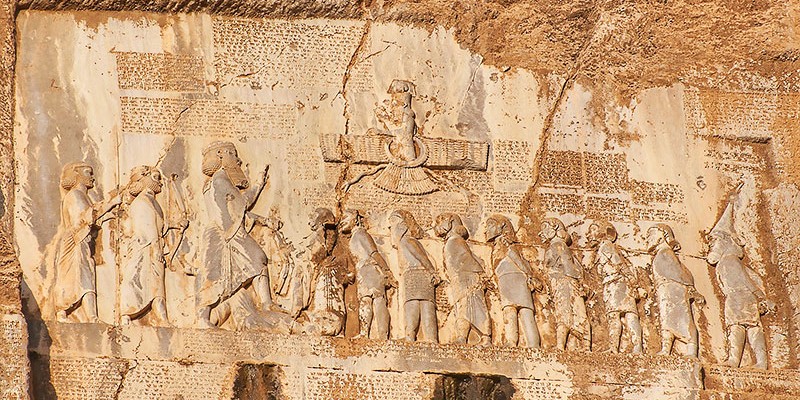 The Bisotun, Bistoun, or Behistun Inscription is the largest inscription in the world and the very first Iranian historical text, related to the great Achaemenid Dynasty, which is one of the most important periods during the chequered history of Iran, and is located in Bisotun Town, 30 kilometers away from the city of Kermanshah in west of Iran. The Bisotun Inscription is one of the most informative and famous documents of world’s history and the most important historical text related to this ancient era, which describes and pictures the victory of Darius the Great over Gaumata the Median Magus and arresting the rebels. Besides an inscription, this vast archaeological site which is one of the top attractions of Kermanshah includes a great bas-relief which is a great masterpiece of Achaemenid art, some historical caves, a Median temple, Parthian bas-relief, a historical bridge, etc., but the principal monument of this ancient complex is the cuneiform inscription and the bas-relief which have caused it to be inscribed as a UNESCO World Heritage Site in Iran.

A Brief History of Bisotun

The name of Bisotun is derived from the word “Boghestan”, which means the place of gods. Because of its suitable mild weather, geographical conditions, and being close to strategical spots like the Mesopetomia and the ancient Silk Road, the Bisotun region was an important place throughout the history, where kings and emperors showed their powers from pre-historic era to Islamic period. The Hunters Cave from the pre-historic era, the Median Temple, Achaemenid bas-reliefs the Hercules Statue from Seleucids, the Mehrdad bas-relief from Parthian period, the Bisotun Palace and the Khosrow Bridge which were built during the Sassanid era, the Ilkhanid caravanserai, and the Safavid caravanserai made by the order of Shah Abbad, are some of the monuments left in this area in thousands of years.

The Bisotun Inscription is a cuneiform three-lingual text with the same content written in Elamite, Akkadian, and ancient Persian languages and is one of the most important factors of decoding the cuneiform handwriting and the ancient Persian language. The inscription is a horizontal frame with 7.8 meters’ width and 22 meters’ length carved on a lime rock. Considering the stains of a brown glaze on some parts of the inscription, it is believed that this was covered by a glaze to be preserved for such a long time. The characters of the bas-relief are carved on the upper part of the frame and the text is layout of the text is designed in a way that the paragraph about each character is carved near their picture in the bas-relief. The ancient Persian text is written in 5 columns below the picture of Ahura Mazda which is shown with human face and a luminescent crown, showing greatness and godliness, and since it provides information about the kingdom of Darius I in the land of Persia and the 23 nations controlled by him, it has a great historical value. The Elamite text is laid out in eight columns and the Akkedian text is written in one column. Apart from these three main scripts there are 11 small inscriptions scattered on the same rock with contents about Darius the Great and his prisoners. The first part of the inscription starts with an introduction of Darius the Great and his ancestors:

The Bisotun bas-relief is 6 meters in 3.2 meters and shows the victory of king Darius over the Gaumata and nine captives with tied hands, while Darius is wearing a royal cloak and crown and is putting his foot on Gaumata’s chest and Gaumata is asking for mercy. The symbolic sign of Ahura Mazda is carved on the top of the frame while holding the ring of power with left hand to give it to Darius the Great and holding the right hand up as a sign of benediction for the king.

The Hercules Statue is a unique and wonderful heritage left in this region from the Seleucid-Parthian era, which was discovered about 65 years ago. This Hercules statue is a great and strong man with curly hair and beard resting on a lion skin and holding a cup with left hand. This statue is located on a 20-meter platform and an inscription written in old Greek language and some Greek ornamental motifs are available at the back of it.