The Dowlat Abad Garden (Dolat Abad) of Yazd is one of the top attractions of this historical adobe city known for its architectural gems and also is one of the nine Persian Gardens which are registered as UNESCO World Heritage Sites. Dowlat Abad is one of the oldest gardens of the Historic City of Yazd. During the Qajar Dynasty, the garden was in Chahar-Monar District, which was located outside the city, while by the city getting expanded since the Pahlavi Dynasty, the garden was surrounded by new buildings and became a part of the city, as you see today.

The History of the Dowlat Abad Garden

By studying the history of Yazd we’ll see that the governors used to build many lush and big gardens in this desert city and it is said that this city used to have 30 gardens however, none of the mentioned gardens are available today.

The Garden was constructed during the late Afsharid Period (around a1750) by the order of Muhammad Taghi Khan one of the governors and powerful Khans of Yazd. The history of the Dowlat Abad Garden is attached to the great Qanat (series of water wells transfering water from long distances) constructed by Muhammad Taghi Khan, which has transferred water to the garden for many years. This great Qanat is 200 years old and includes 5 chains of water wells that originated from the Mehriz Town heights and after passing a 50-kilometer route and activating some water mills and watering many farms on its way, reached the Dowlat Abad Garden and watered its trees. Then he founded some governmental buildings on the current location of the garden and then little by little the garden including some mansions, ponds, fountains, and pomegranate and grape trees was created. During that time, the garden was located beside a 20-kilometer street surrounded by tall trees behind which the garden was hidden like a treasure. Therefore, this beautiful street that connected the garden to the city of Yazd was titled “Thousand-tree Street”. The Dowlat Abad garden had both governmental and residential functions. The exterior part of the garden was used for holding official ceremonies, and holding meetings for city affairs and the buildings inside the garden were private and residential parts used by the family guarded by doormen and concierges. 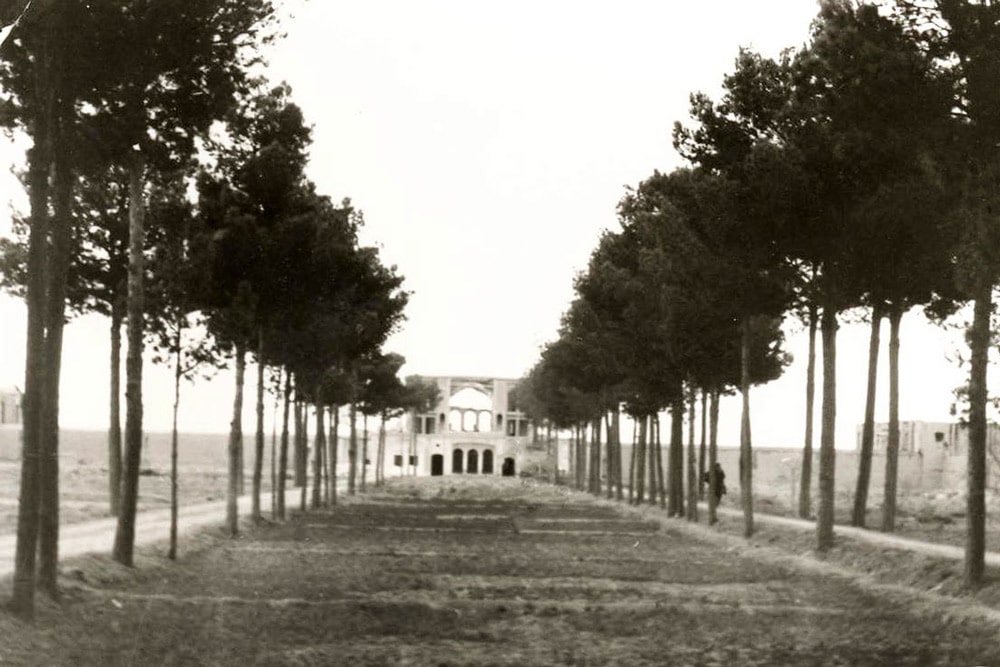 The Architecture and Design of Dowlat Abad Garden

Symmetry is one of the main features of Persian art which can be noted in most Iranian monuments and handicrafts from ancient times to the Islamic Era, in both construction and ornamental elements. Persian garden is not an exception and all the available samples have symmetrical constructions, and the main mansion of the gardens and also other elements including the trees and plants, the fountains, and ditches are located on the axial symmetry and both sides of the axis. With its symmetrical pattern, the Dowlat Abad Garden of Yazd is one of the Persian Gardens with an original Persian garden design. The garden’s plan includes two rectangular areas (the public and the private gardens mentioned above). Apart from aged cypress, pine, and fruit trees, eye-catching plants, pools, and fountains, what amazes visitors in this garden is Dowlat Abad Garden is its stunning constructions and mansions: 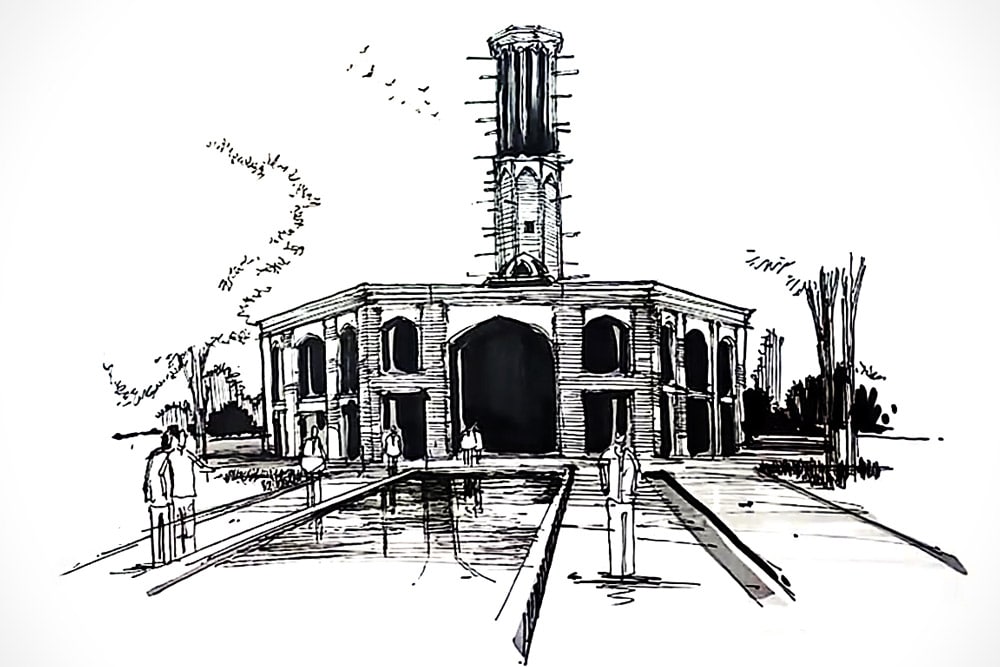 Hashti Mansion (Emarat-e Hashti) is located on the main axial symmetry of the garden and is attached to the southern wall. This is the main mansion of the garden and is characterized by its high windcatcher (Baadgir). This two-story building has three rooms ornamented with stunning stained glass windows, known as Owrsi windows in Persian, and the central room has a small pond made with marble stone. 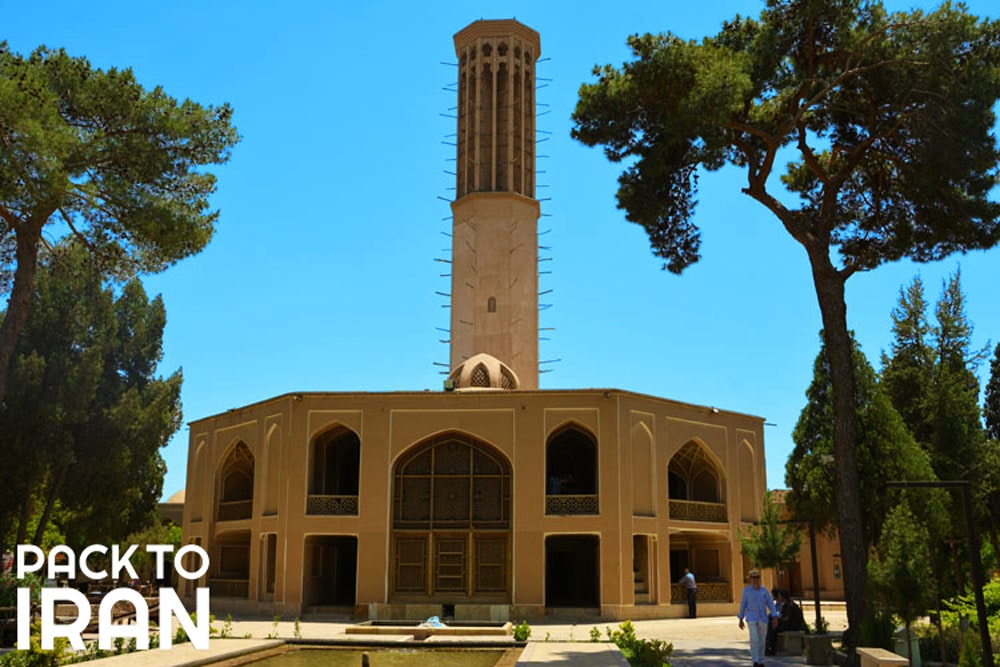 The eye-catching windcatcher or the Baadgir of the Hashti Mansion is 33.8 meters high and is known as the highest wind catcher in the world and also an icon of Yazd city. Another feature of this construction is its octagonal plan which boosts the air conditioning and circulation. Also, the water in the marble pool beneath the wind-catcher caused the whole mansion to become cooler and to be used as the summer house by the family. 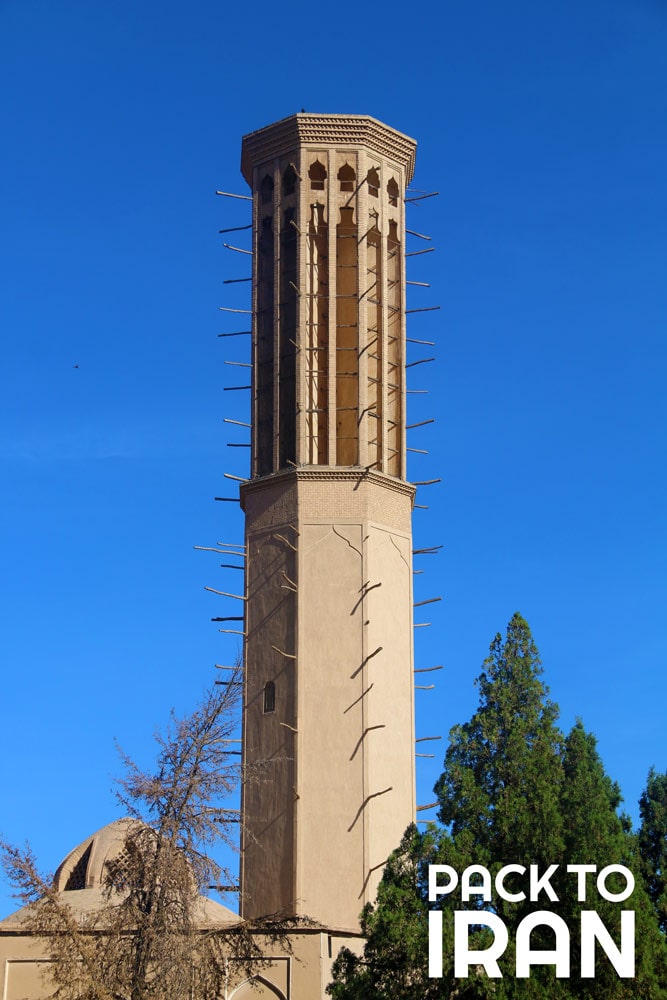 Tanabi Mansion or Emarat-e Tanabi is on the west side of the Hashti Mansion and is a fancy building topped with a square wind catcher tower, halls, terraces, Shabistans, and basements with two stairways. 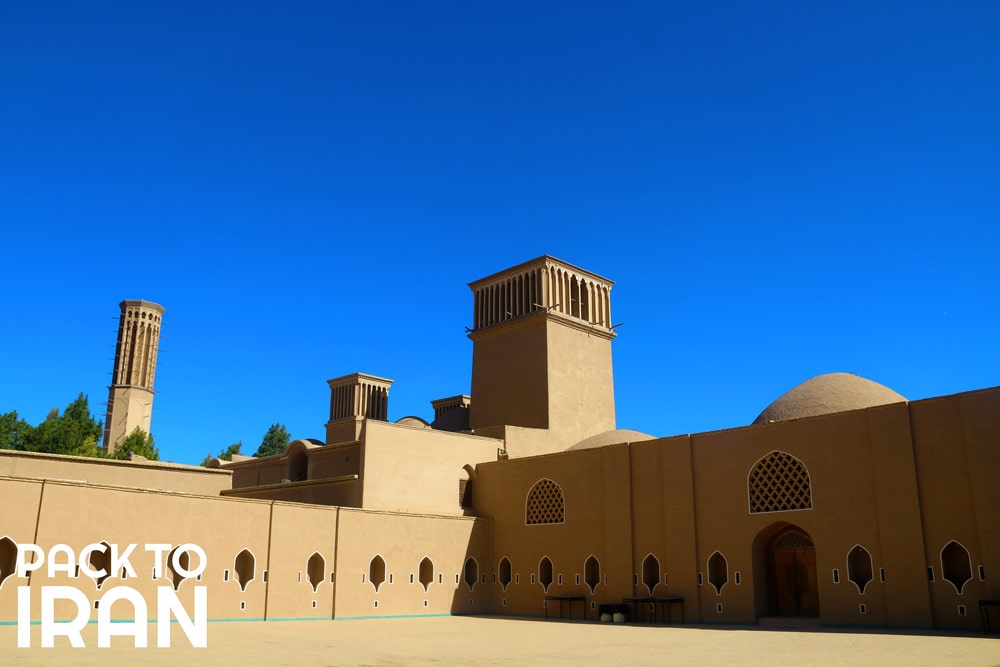 As mentioned before, the main water resource of the Dowlat Abad Garden has been the historical Qanat of Mehriz, however during the drought years, the garden gets watered by a water well and also the water stored in the watermill of the garden. Water in this garden has also an ornamental function and doubles its beauty and makes the atmosphere more and more pleasant. Also, the circulation and recycling of water between the ponds, fountains, and ditches shows the skill of the designers. 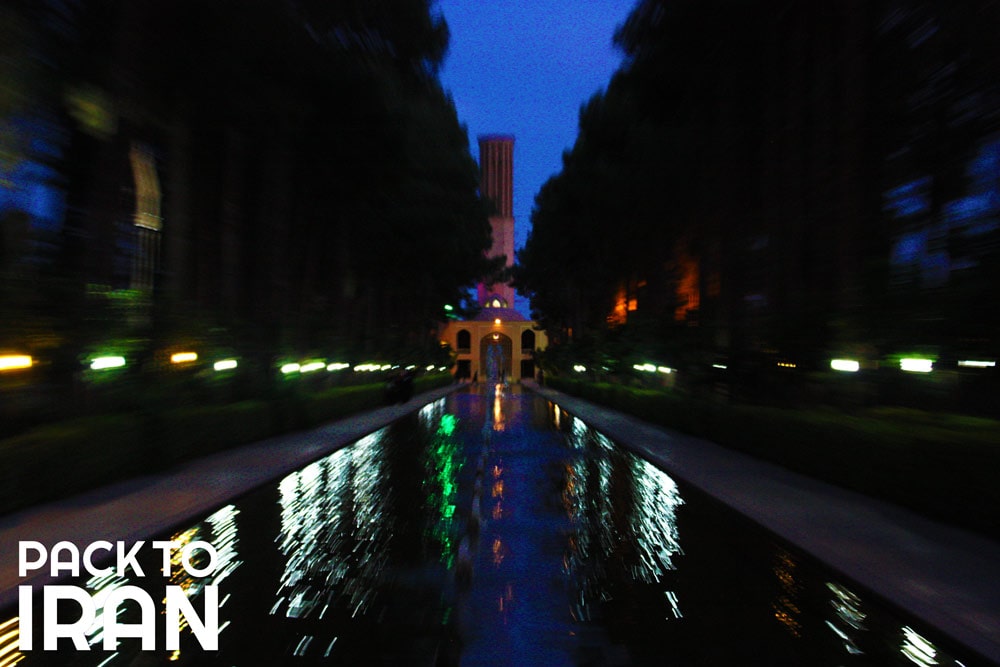 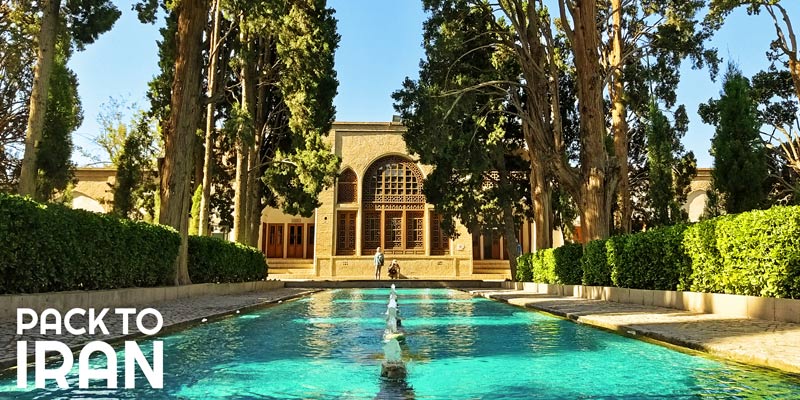 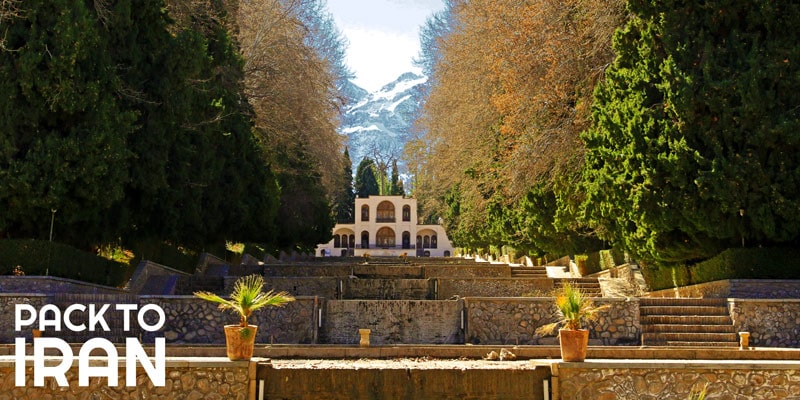