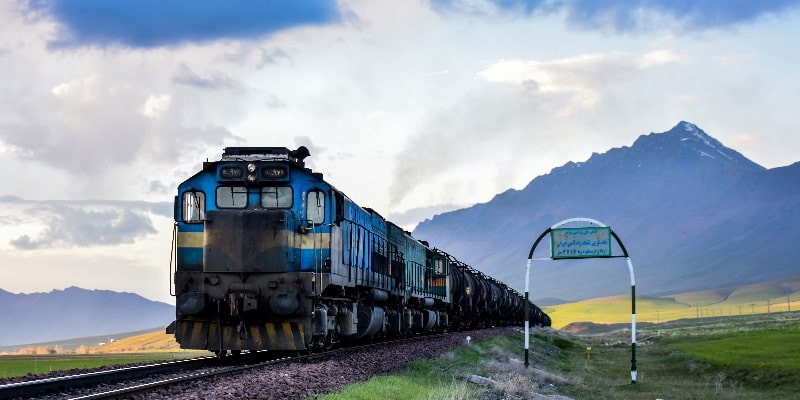 The Trans-Iranian Railway, which connects the Caspian Sea in the north of Iran to the Persian Gulf in southern Iran, and is the longest railway in the world, and also an excellent sample of engineering and project management was studied and inscribed as the 26th UNESCO World Heritage of Iran during the 44th session of this committee. This railway, which is 1394 kilometres long, passes through four climatic regions, two mountain ranges including the Zagros Mountain Range and the Alburz Mountain Range, plateaus, steep routes, forests, rivers, plains, etc. on its way and the project involved numerous mountain cuttings, tunnels, bridges, etc. making this railway so significant to be listed a World UNESCO Heritage.

The History of Trans-Iranian Railway

The construction of this railway was an important development in the history of Iran and and modernism in this country. The establishment of the Iranian railway was started 1227 (1848 BC) during the Qajar Dynsaty and was started by a railway stretched from Rasht the center of Gilan Province to Bandar Pir Bazaar and Bandar Anzali, economical ports in the same province in the north of Iran and 12 kilometers of it was used until the kingdom of Reza Shah. The remains of this railway and a steam locomotive is still available.

In 1882, tram line was established from Tehran to Shah Abdulazim Holy Shrine in Rey town located in the south of Tehran. This railway was one-meter-wide and 8700 meters long and was led by a French team. About four years later, the railway between Mahmudabad (a beach town by the Caspian Sea in Mazandaran Province) to Amol and although it was meant to be stretched to Tehran it remained a small project. In November 9th 1890 and as a result of a contract between Naser eddin Shah the Qajarid King and Russia Iran got banned from constructing any railway for ten years and then this contract was extended for another ten years by Muzaffar eddin Shah for a 6 million Franc loan from this country. During the World War I the Russian government started a railway project from Julfa to Tabriz which was 149 kilometers long and was used by the Russian army for transferring ordnance. After the World War this railway was assigned to Iran. The Julfa-Tabriz railway is the first route of the current Trans-Iranian Railway which is still in use.

In 1918 the UK government constructed a railway from Bushehr (a port by the Persian Gulf) to Borazjan for 60 kilometres to be used for military aims and importing goods from England to Iran through this trade and industry port. After the World war I the UK army suggested to sell this railway to the municipality of Bushehr, but municipality refused this suggestion and they transferred the railway to Basra a port in Iraq. The British army constructed another railway in Iran during the World War I from Mir Javeh Town in the Sistan o Baluchistan Province to Zahedan the center of the same province in the southeast of Iran, which got used for public transportation during the kingdom of Reza Shah. This vast railway was expanded and connected different parts of Iran during decades and then continued until 1956 after a long break during the World War II, however in some parts the project was continued by the order and budget of Adolf Hitler to be used against the Russian army in the north of Iran.

You can book your Iran train ticket online from here and receive your ticket in less than 48 hours via your email.

2 0
You can rate this post
Users Rated: 4 From 1 rates
Comments