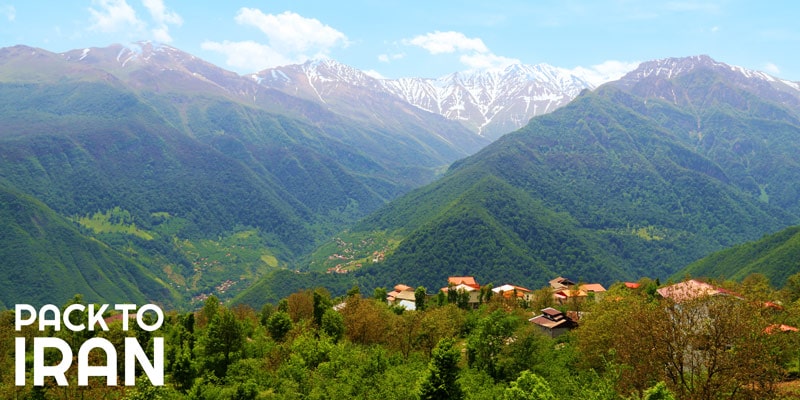 Although many travelers think that Iran is covered with deserts and you can't travel to this country during summer because of its hot climate, there are many places including natural attractions and historical cities in the north, west and northwest of Iran that have cool climate during summer.

Iran is among the countries with almost dry climate and hot summers and is home to the vast Lut Desert which was recorded as the hottest spot on earth for some years. Since mid-June to late September, the weather is hot in most regions of Iran especially in southern cities including Khuzestan Province, Bushehr, Bandar Abbas and its islands like Qeshm and Hormuz islands that get really hot and humid during summer and also eastern cities like Yazd and Kerman. But it is interesting to know that this doesn’t omit Iran from the list of destinations that you can travel to during summer. With its diverse climate and geography, Iran is a four-season country where you can travel all around a year, including summer. Most of the cool areas in Iran are located on the heights of the Alburz Mountain Range in the north and northwest of Iran and also in Zagros Mountain Region. By traveling to Iran during summer you can explore the most important cultural landmarks in main touristic cities where the heat is not unbearable with less crowds and also get services like hotels and cars with lower prices than in spring, which is the peak season. In this article, PackToIran will introduce the top summer destinations in different areas of Iran, most of which are amazing natural attractions.

Located in Ardabil Province in the northwest of Iran, Sabalan Mount is 4811 meters high and the third highest peak in Iran. According to the legends and local myths, this peak is known as the place where the Zoroaster was announced for his prophetic mission. This legend is also mentioned in “Thus Spoke Zarathustra”, a novel by Nietzsche. Apart from being one of the most important peaks among the mountain climbers who travel to this area for an adventure, the Sabalan region is a wonderful destination for getting relaxed in nature, and enjoying light trekking, fresh air, and cool weather in summer. Here around Sabalan there are eco camps where you can stay for a couple of days and many natural thermal springs.

Tabriz is one of the most important historical cities of Iran with numerous cultural sites and attractions, which is the center of East Azerbaijan Province located in the northwest of Iran and has a cool weather during summer. As a result of being located on the route of the ancient Silk Road and being an important economical center for centuries, Tabriz is home to the biggest roofed bazaar in the world known as the UNESCO listed Bazaar of Tabriz, which exhibits and amazing architecture and the rich culture of the city. Thea Azerbaijan Archaeology Museum, the Kabood Mosque (Blue Mosque), and the Saint Stephanos Monastry of Julfa are among the top attractions of Tabriz that you can visit during your stay in this city.

The ancient village of Kandovan is one of the most unique and exotic villages that you can visit and one of the top summer destinations in Iran. Located 60 kilometres away from Tabriz by Osku Town, Kandovan Village is the only rocky village in the world which is still inhabited by locals. The natural and hand carved caves of this village were dug 6000 years ago by immigrants who resided and sheltered from the enemies and invaders. Today there are many ecolodges and also 3-star and 5-star hotels in the Kandovan Village, where you can stay and enjoy the amazing atmosphere.

Gilan Province is located in the north of Iran between the Caspian Sea and the Alburz Mountain Range, which has caused this region to be covered with lush and rainy forests offering scenic landscapes. The heights of Gilan, where the temperature is mild during summer and the humidity level is not annoying like on the sea shores have now become a popular summer destination among nature lovers for forest trekking and camping. Also known as the lost heaven, Masal Village is one of these places in north of Iran where you can escape summer heat and city crowds and enjoy the rural life and scenic views like foggy forests and an ocean of clouds passing beneath your feet every afternoon.

Kuhrang County is a region in Chelgerd County of Chaharmahal o Bakhtiar Province in the southwest of Iran and is located in the heart of the Zagros Mountain Range which embrace untouched nature especially during spring and summer when the weather is mild and cool and plains are covered with tulips and fresh fountains, and waterfalls pour down the mountains. This fantastic region is also home to Bakhtiari Nomads, known as one of the biggest ethnic groups in Iran. You can meet the Bakhtiari Nomads of Kuhrang County on Iran Nomad Tour and enjoy the unforgettable experience of living with the nomads.

Hamadan is one of the ancient cities of Iran, known as the heaven of archaeologists and ancient history lovers. During the 8th century BC, Hegmatana or Ecbatana was chosen as the capital of the Medes by Deioces, and during the Achaemenid Empire, it was chosen as the summer capital. Today, the Hegmatana mound is one of the most important ancient and archaeological sites in Iran. With its cool climate during summer which makes it a good summer destination, Hamadan has many cultural and natural attractions like the amazing Alisadr Cave which is the longest water cave in the world, the Ganjnameh inscription related to the Achaemenid Empire, the Tomb of Esther and Mordechai which is one of the most important Jewish pilgrimage sites in Iran, the Tomb of Baba Taher, etc.