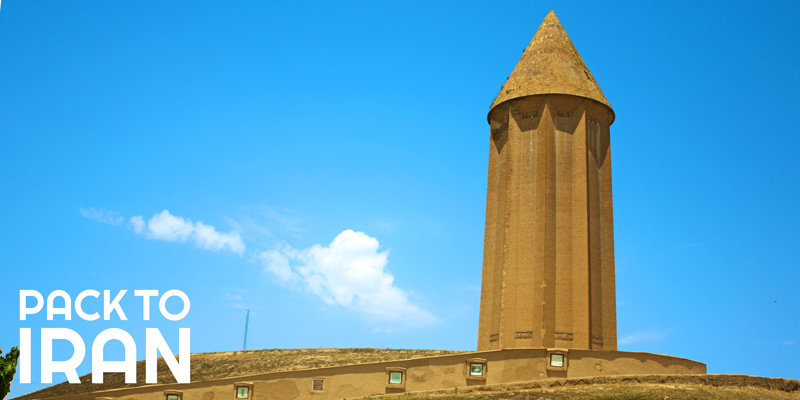 Iran is home to 24 UNESCO World Heritage sites that make this country a must see destination. Located in Golestan Province in the northeast of Iran, the brick-made Gonbad e Qabus Tower (Also known as Mil) is one of these world heritages that is known as the second highest brick tower in the world.

Gonbad e Qabus Tower is a historical monument from the fourth century Hijri, which is located in a town with the same name in Golestan Province in the northeast of Iran. Known as the second tallest brick tower in the world, this magnificent construction which is believed to be the tomb of Qabus Ibn Vashmgir (the fourth Ziarid king) is 72 meters high including its 15-meter base and its unique conical dome. The Gonbad-e Qabus Tower is one of the most amazing architectural masterpieces in Iran, which was mentioned by the great historians like Arthur Pope and Will Durant and got registered as a UNESCO World Heritage Site in the 36th conference of UNESCO.

The function of towers in Iranian architecture

Since Pre-Islamic Era, Iranians used to construct tall towers with very simple ornaments by the roads named Mil or Monar which means the spot of light and fire, and helped travelers and caravans in finding the way to the cities and caravanserais during nights and foggy days. These towers were also used for sending signals to further areas. During the Sassanid Era, these towers functioned as a fire temple and the Mobeds were in charge of keeping the sacred fire on. It is also said that considering the height of the towers, these constructions were used as watching towers by astrologers for stargazing during the Islamic Period.

There are about 30 historical towers (Mil) left in Iran, most of which are related to the 4th and 6th centuries Hijri. The construction of a tower, which has a circular, square, or multilateral base, has 5 main parts including the base, stem (body), covering, stairs, and dome (lid). Considering the high altitude of the towers compared with their small area, the base of towers played an important role in the strength and persistence of the structure. The most important part of the towers is the dome, which has different shapes (circle, square, or octagonal) according to the shape of the stem, and has small windows through which the light of fire shined.

The Gonbad e Qabus Tower was built during the 4th century Hijri, when the Ziyarid Dynasty ruled the northern regions of Iran including Tabaristan, Gilag, Gorgan, and Deylam, by the order of Ziyarid King Shams ol Maali Qabus Ibn Vashmgir in the city of Jorjan (Gonbad Gabus town), the capital of the Ziyarids. The main use of the Gonbad e Qabus is not specified. Some historians introduce this monument as the tomb tower of Qabus Ibn Vashmgir, however this theory was never proved as the remains of any corpse was never found in this tower. It is also said that this king was a literate man who was influenced by Persian literature and had communications with great astrologers of the time, and asked Kooshyar Gilani (the great astronomer) to build an observatory in the city, which is believed to be the same tower. Apart from the discussions about the function of Gonbad e Qabus, this 1000-year-old monument is one of the best samples of engineering and architecture in terms of design and stability throughout the art history, chose by the great architectures of the world.

The architecture of the Gonbad e Qabus Tower

What makes Gonbad e Qabus an engineering masterpiece is the fact that it is fully constructed with bricks and mortar, and despite of being built more than 1000 years ago and bearing two 6 earthquakes it is still firm and stable. According to the different styles of traditional Iranian architecture, Gonbad e Qabus exemplifies the combination of Khurasani and Raazi styles. One of the characteristics of Raazi style is the high qualified and delicate brick works and Gonbad e Qabus is not an exception. The base of the tower is a cellar which is 15 meters high located on a hill, and the body (stem) of the tower is 37 meters long and decreases in diameter from the bottom to top. The body has a simple and minimal decoration including ten serrations, and is topped with the unique conical dome. This is a two-shelled dome and is 18 meters’ high covered with brick works. The Gonbad e Qabus shows the very first examples of Muqarnas in Islamic architecture on an arc located on the entrance door of the tower. Two inscriptions written in Kufic are other ornaments of the tower that are implanted beautifully with brickworks. These two inscriptions show some phrases like:

This glorious UNESCO Site of Gonbad e Qabus Tower is one of the amazing cultural attractions in Iran which is not visited a lot as it is located in Gorgan, which is a less touristic city in Iran, however it has amazing nature and rich culture. You can visit this city and other unique destinations in the north of Iran, on the 10-Day Northern Iran Tour.