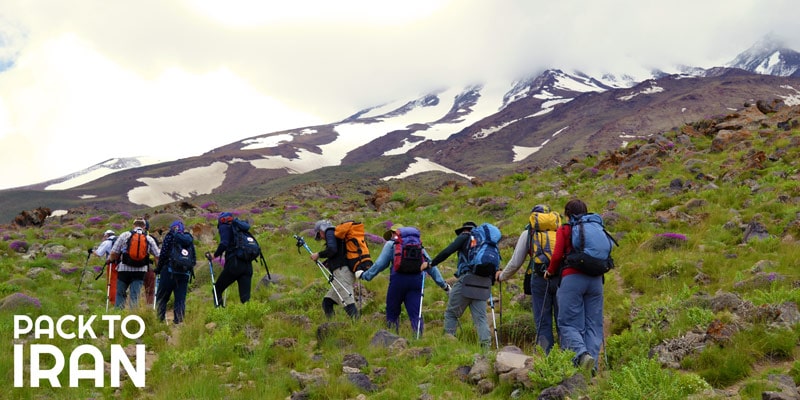 Climbing the Mount Damavand with PackToIran

Besides its cultural and historical attractions in Isfahan, Yazd and Shiraz, Iran has numerous natural attractions for the adventurers and travelers who look for nature based activities in Iran. With 5610 meters height, the Mount Damavand is located in the north of Iran and is the highest peak in Iran and the Middle East and one of the safest and best mountains for climbing and trekking in the country.

Damavand Mount is the highest peak of the Alburz mountain range in the north of Iran and is the highest volcano peak in Iran (5610 meters) and the Middle East. When the weather is clear, this peak is notable from Tehran, Varamin, and some cities in the north of Iran. The iconic Damavand Mount has a special place in the history of Iran as it has been introduced as the borders of the Medes Empire in Assyrian documents and it was also mentioned in Iranian legends and literature masterpieces like the Shahnameh (written by Ferdowsi) as a symbol of strength and supremacy. Also, with a rich variety of flora and fauna, Damavand Mount is a national heritage of Iran and one of the best mountains for climbing in Iran because of its safety, being technical, its scenic landscapes, and its easy access from Tehran. Today, Damavand Climbing tours are becoming popular among adventure lovers and mountain climbers from different countries who love to climb summits in different parts of the world. Some travelers combine their Damavand climbing adventure with a classic Iran tour and visit some cultural sites too, while some others spend less than a week in Iran for this climbing trip. The duration of a Damavand climbing tour usually varies from 2-3 days to 4-5 days considering the body strength of the climber or team and the weather in the region. Below you can read the report of one of Damavand Climbing tours operated by PackToIran in July 2018 for five mountain climbers from France and Germany.

Our Damavand climbing adventure was started at 5 am from the hotel in Tehran where the group stayed. We picked up the group and moved towards Polour in a 4WD car (90 kilometers). Polour is a village in Larijan District in Mazandaran Province and is known for having cool summers. We had our picnic breakfast on a scenic plain on the way and arrived Reyneh Basecamp at about 10 am. We noticed the Damavand peak which was covered with snow and sulfur from afar. Reyneh Basecamp which is 2100 meters above sea level is known for its hydrothermal springs and we decided to enjoy relaxing in them after our climbing. We met our local guide Hosein, and we enjoyed some trekking and exercising in the area. In the evening we served a light dinner made over a fire. Since there were some other teams at the camp, we decided to set up our tent and enjoy the silent area.

After having our breakfast at 7, we moved towards the second camp named Goosfand Sara on the 4WD car. The altitude of this famous base camp is located 3000 meters. Today, we climbed to the third camp for exercising and acclimatizing. Today’s route was a smooth path with scenic views and after light trekking which took about 5 hours, we descended to the camp for the night. We enjoyed drinking herbal drinks and exchanging experiences of our previous mountain climbing in different cities and countries.

Early in the morning, we gave our backpacks and camping stuffs to a man who was in charge of bringing them up with mules and started climbing the same route we did yesterday. We arrived Bargah-e Sevom camp (4200 meters) in the afternoon. Bargah-e Sevom is a 3-floor building with 70 beds and simple facilities, where the teams can get a good rest the night before climbing to the top of the mount. We had reserved some beds at Bargah-e Sevom before the trip at a low price. After having our dinner, we went to bed early at night to get ready for tomorrow’s ascending.

After having a light breakfast at 6:30 we head towards the Damavand Peak with small backpacks and a light snack containing some water and snack. Luckily, although it was a bit chill, the weather was almost clear which made our climbing easy and safe. At 11 in the morning, we reached the frozen waterfall which is one of the most important spots of the Damavand mount on the southern flank, located 5100 meters above sea level. And then we continued our way by climbing the rocks beside the waterfall. Since the slope was getting steeper and steeper, we had to continue more slowly and take frequent short rests. Also by getting closer to the peak we had to cover our face and nose because of the smell of the sulfur. Finally, at 14:30 we managed to reach the legendary Damavand Peak. We were so excited and happy that all the four of us could reach the peak and no one had to descend because of altitude sickness. We took some photos fast and started descending after 15 minutes because of the Sulphur gas and the wind which was getting intense. We were at Bargah-e Sevom around 6 pm and enjoyed taking a rest after a long adventurous day.

After having a rich breakfast, we went back to the Reyneh Basecamp and rode towards the thermal water springs located on Damavand downhills. Then we enjoyed wonderful camping and enjoyed a tasty barbequed dinner on Dasht-e Laleh Plain, which is known for its scenic landscapes.

The next morning we drove back to Tehran and after having a farewell lunch and a short tour in the city we transferred the group to IKA airport for their flight back home.