Located in the Shemiranat region in the north of Tehran, the historical Sa’dabad Complex was one of the three summer residents of Qajar and Pahlavi kings who ruled Iran as the last kings of this country. This historical complex includes 18 small and large glorious palaces located inside a vast and lush garden and is one of the main attractions of Tehran that provides much information about the royal architecture, culture, and history of Iran during the 18th and 19th centuries besides being a recreational place with fresh weather and charming views. The Sa’dabad Complex is a 300 hectares area. The mansions and the palaces of the complex cover 110 hectares of the area and the rest (180 hectares) include the gardens and the Qantas. Designed by skillful Iranian and foreign architects of the time, the palaces of Sa’dabad complex show an astonishing combination of European architecture and traditional Iranian architecture styles. 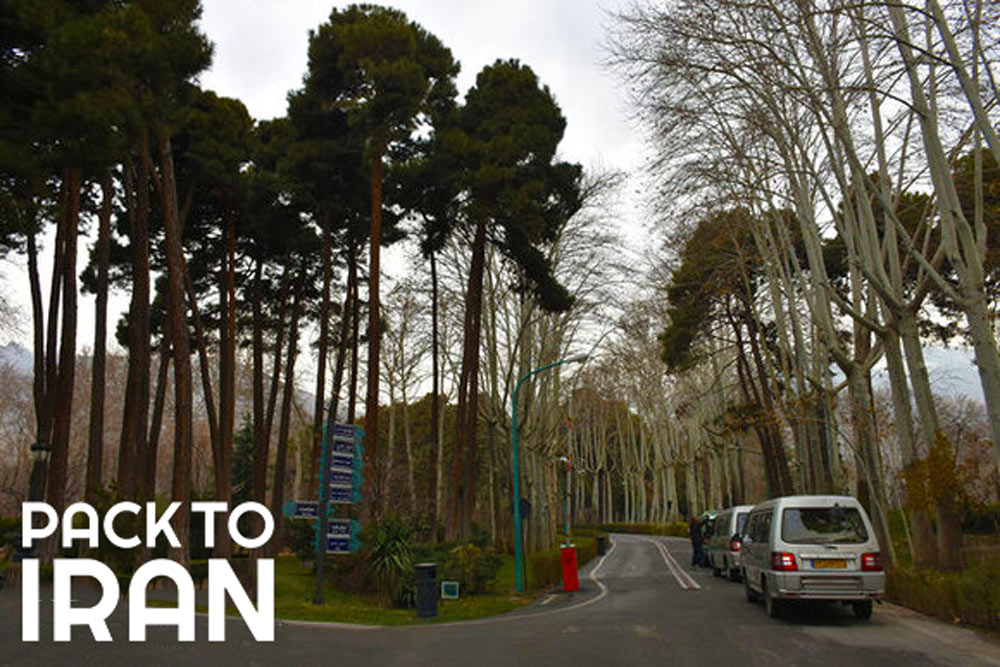 The history of Sa’dabad Complex

The Qajar kings who chose Tehran as their capital were the first owners of Sa’dabad located on the foothills of Tochal Mount, which was an area covered with endless gardens with very pleasant weather. The oldest monument of the complex dates back to the kingdom of Ahmad Shah, the last king of the Qajar Dynasty.  After the Persian coup d'état of 1921 and the conquest of Sa’dabad Complex, this property was expanded and changed into a more glorious summer house for the Reza Khan (Reza Shah) the first king of the Pahlavi Dynasty (1925-1979). Little by little, new monuments with various styles of architecture and decorations were added to this complex and were used by different members of the Pahlavi Dynasty. In 1971 Muhammad Reza Shah, the son of Reza Khan and the last king of the Pahlavi Dynasty, and his family chose this complex as their new royal house. The last palace of the complex was built for Leila Pahlavi the youngest daughter of Muhammad Reza Shah Pahlavi. Since the Iranian revolution of 1979, the Sa’dabad Complex was not used as a residential palace anymore and the mansions of the complex are now being used as museums, galleries, and presidential offices. 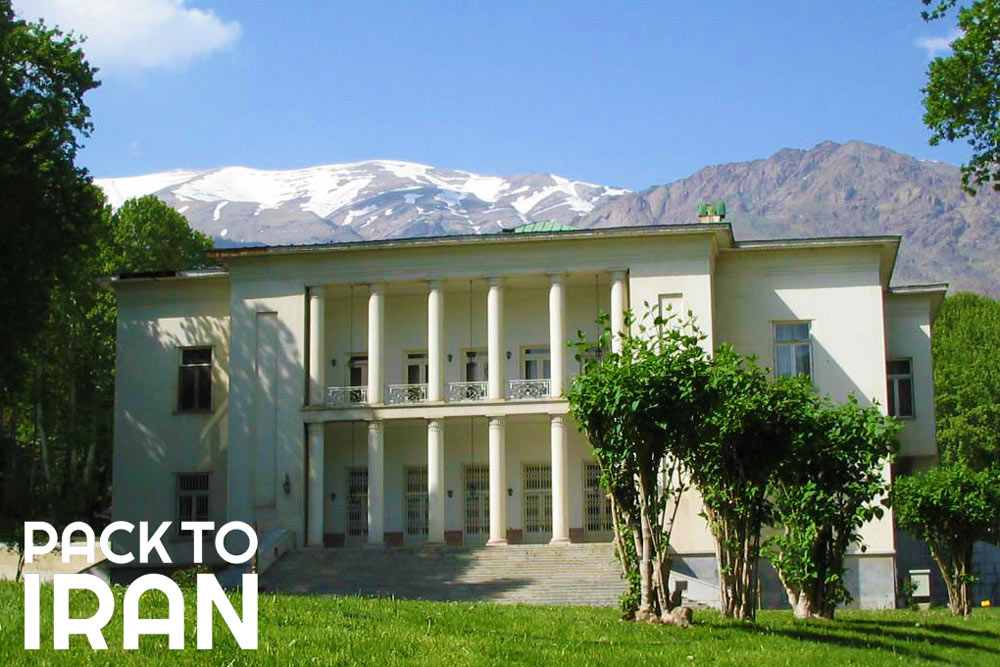 The palaces of the Sa’dabad Complex

The White Palace, which is the largest and one of the most significant monuments of the complex, was designed by Architects Mr. Khursandi (Iranian) and Mr. Buris (Russian) and the delicate stucco works and decorations are the work of Iranian artists like master Lurzadeh and Malaekeh. This construction is characterized by its shiny white exterior and was resided by Muhammad Reza Shah and Queen Farah. The four marble Roman-style pillars at the entrance of the White Palace are examples of the Iranian-European combination. Their statue of “the two boots” related to Reza Khan is located in front of this palace. This statue used to be a complete figure but it was ruined by the locals of Dezful town during the revolution and then the boots were transferred to this place. Today, the White Palace is a museum that houses very fancy and fine Persian carpets, original paintings, precious crystals and potteries, chandeliers, etc. 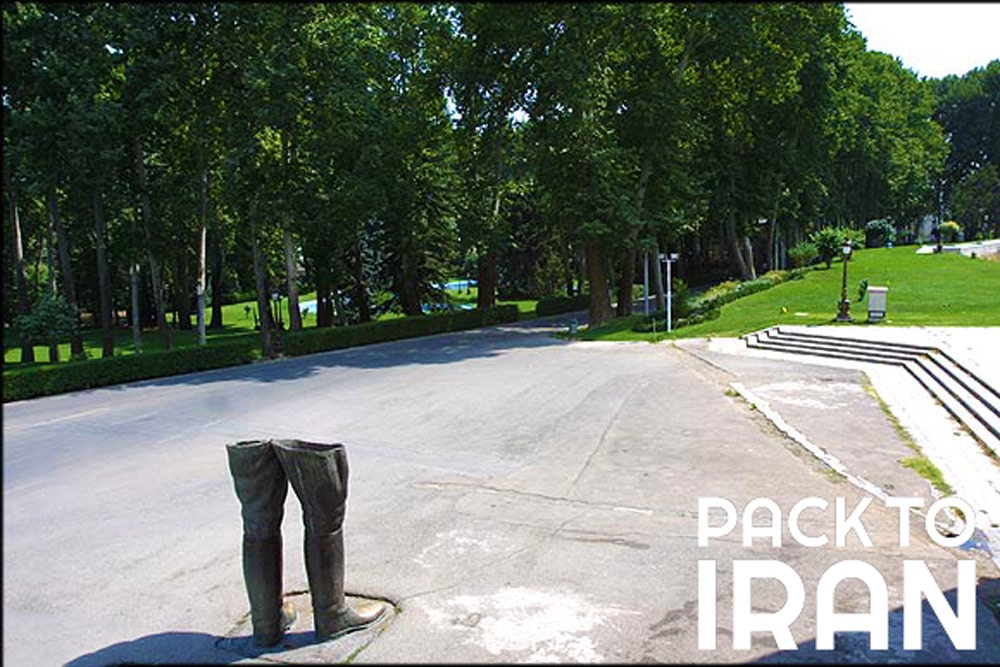 Also known as the Shahvand Palace, the Green Palace (the Kakh-e Sabz) was designed by Mr. Jafar Kashi also titled Mr. Mimar Bashi, and was used as the office and the residential palace of Reza Shah. It took more than seven years for the artists and craftsmen to build this palace and they used green stones from stone mines in Zanjan and marble stones from Khurasan to design this lavish and greenish façade for this fancy mansion. The interior of the Green palace is decorated with delicate tilework, stucco, khatam Kari, and illuminated manuscripts done by the great master Hussein Behzad. The Mirror Hall and the luxurious objects like the French furniture, antique cutleries, and the 70-meter Persian carpet are some of the most amazing parts of this palace that should be visited. 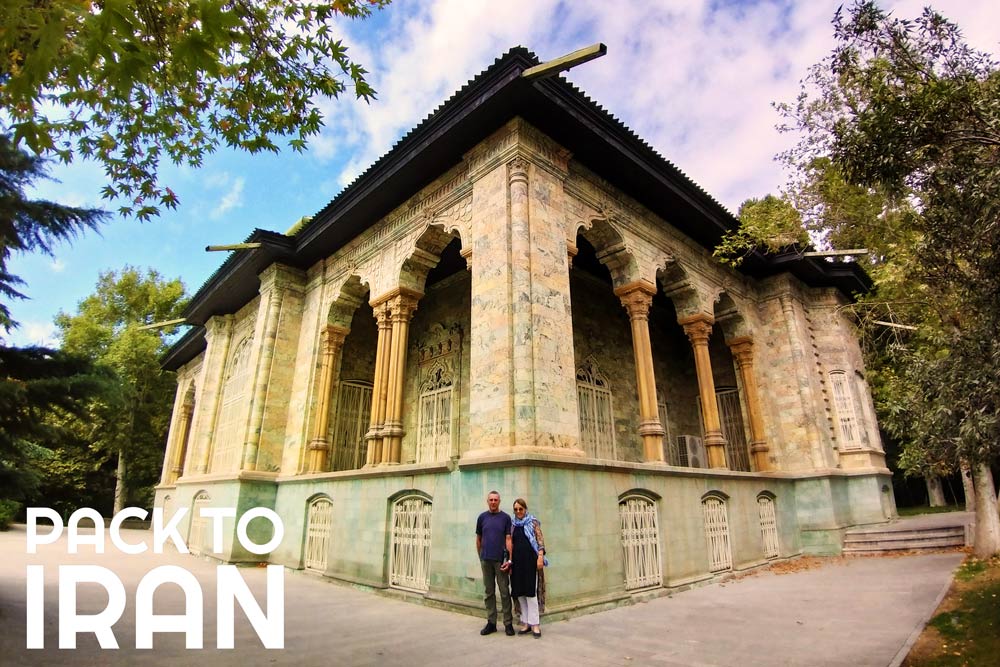 With its charming design and balconies opening to the heavenly beautiful garden, the Special House (Kakh-e Ekhtesisai) is one of the parts which is not public for visit and is used as the presidential office today.

This palace was used as the minister’s office during the Pahlavi period, while today it is the Museum of Fine Arts with many original paintings from all over the world. The reason for naming this palace Asvad (meaning: black) is that the exterior is covered with black marble stone.

This mansion used to be the royal house of Shams Pahlavi, the oldest daughter of Reza Shah and the sister of Muhammad Reza Shah. Today, this building is used as a complete anthropology museum and the fabulous collection of the dresses of Queen Farah Diba and other Pahlavi queens which is a resource of wonderful textile and fashion designs and the combination of fashion with traditional Persian textile motifs. 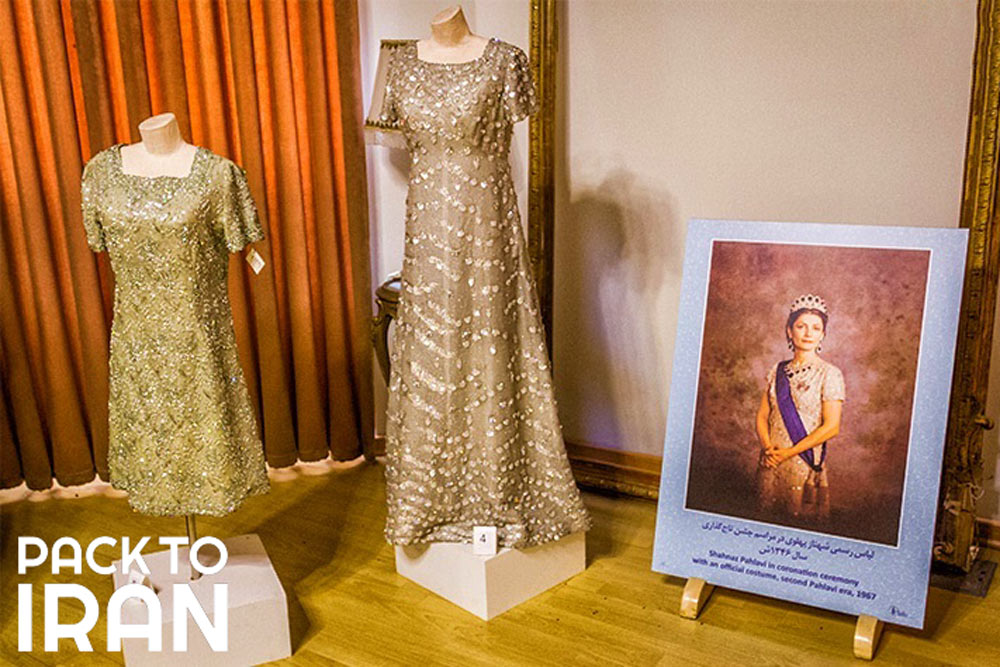 This palace belonged to Ashraft Pahlavi the twin sister of Muhammad Reza Shah. After the 1979 revolution, this palace is used as the Museum of Royal Dishes, housing the handmade dishes from the Qajar and Pahlavi dynasties and fancy dishes which were presented to the king and queen from all over the world.

Located at the center of the Sa’dabad Complex, the Palace of Queen Esmat Dolatshahi belonged to the wife of Reza Shah, and since twenty years ago, this construction is used as a gallery for exhibiting 70 pieces of miniature paintings done by Mahmoud Farshchian, the great Iranian painter. This building is also known as the Museum of Mahmoud Farshchian. 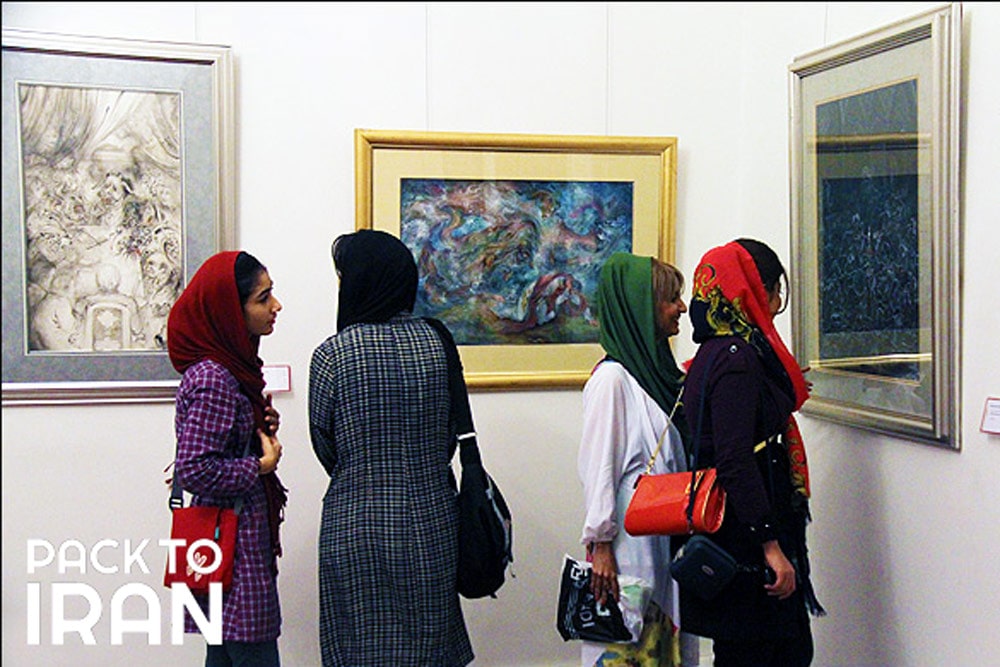 The first House of Reza Pahlavi - Museum of Hussein Behzad

Also known as the Karbas Palace, this was the residential and official palace of Reza Pahlavi the son of Muhammad Reza Shah, and now it is used as the Museum of Hussein Behzad, a prominent Iranian painter, and miniaturist.

The Palace of Farah Pahlavi

With its amazing architectural design, this building is located on the north of the complex and today it is an art gallery where great painting and miniature exhibitions are held.

Gates of the Sa’dabad Complex

This glorious complex has different entrance gates including:

The Nezamiyeh Gate, through which Reza Shah entered the complex for the first time

The Darband Street Gate, through which Muhammad Reza Shah came into the the complex

The Zafaraniyeh Gate, the entrance to the presidency organization

The Gate of Darband Square

Besides high towers, modern galleries, and new restaurants, Tehran has many historical attractions including glorious mansions, lavish gardens and fancy palaces, as it has been the capital of Iran since the Qajar Era. For visiting the top highlights of Tehran on a professional guided tour and learning about the history and architecture of this city, take a look at our Tehran Day Tours and choose your favorite one.

Tips for visiting the Sa'dabad Complex

1- It takes a day to visit all the palaces and museums of the Sa'dabad Complex, so we suggest you to visit the four top palaces including, the White Palace, the Green Palace, the Master Farshchian Museum. Also consider some time for enjoying a walk through the complex. It takes 2 hours to visit theses three palaces, so if you have more time you can visit more palaces.

2- The green palace is located on the highest spot of the complex. It takes 15 minutes to walk from the entrance to the green palace and you have to walk uphills. If its hard for you, there are vans driving in between palaces every few minutes.

4- You have to buy the entrance tickets for all the visit from the ticket stand right at the entrance of the complex.

3 0
You can rate this post
Users Rated: 7.5 From 4 rates
Comments
Tags : Tehran attractions 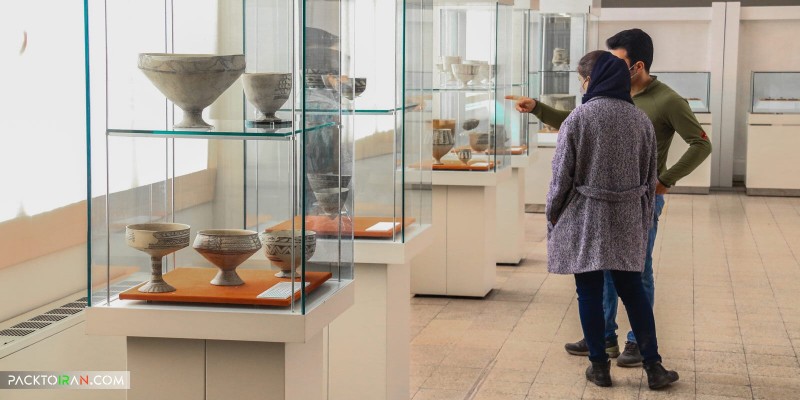