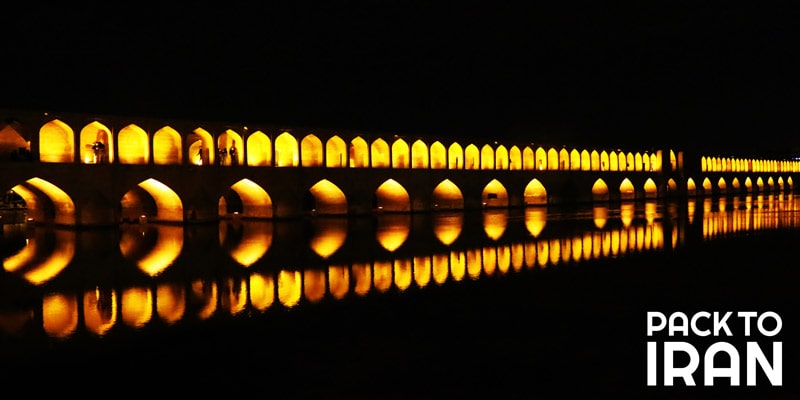 The Historical Bridges of Isfahan

With wonderful monument, palaces and gardens, Isfahan is the most charming city of Iran that you should visit in Iran. The historical bridges built over the Zayandehrud River, especially the Si-o se pol and Khaju Bridge, are known as the icons of Isfahan and are among the main attractions of the city.

The city of Isfahan

Isfahan is a city that despite all the difficulties throughout its history, still shines like a jewel among the cities of Iran. Isfahan is so lively as if it is born today, yet so noble as if it has existed forever. The combination of the rich culture and the beautiful nature of the city makes it a perfect manifestation of the Islamic – Iranian culture. Isfahan is located at the center of Iran, alongside the plains around the Zayandehrud river which is the largest river of central Iran. Flowing eastward, the river crosses the city of Isfahan which became the glorious capital of Safavid kings in 1598 when Shah Abbas became the king. Shah Abbas made Isfahan one of the most glorious and prosperous cities of the world during 30 years of his rulership by making it the center of art, architecture, science, engineering, and religion. Great artists from all over the world came to Isfahan to help Shah Abbas built the architectural masterpieces that are still admired by the world. Among numerous buildings that were made, some bridges played a principal role in the economy of the city by connecting the Northern part of the city where the king’s palaces, bazaars, and the Naghsh-e Jahan Square were located to the southern part of the city which was mainly the Armenian quarter of Isfahan, where the important merchants on the Silk Road used to live. Eleven bridges are made over the Zayandehrud throughout history. Some of these bridges are among the top attractions of Isfahan that should be visited. Here are three of the main historical bridges recommended by the PackToIran team. 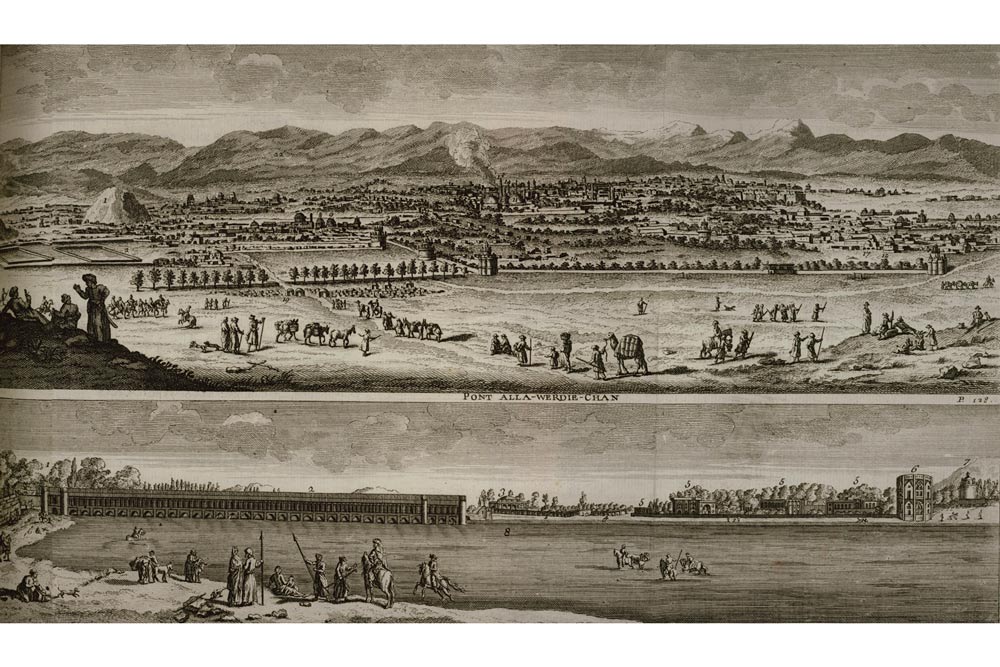 An old painting of Isfahan

Si-o-se-pol means the bridge of thirty-three referring to the 33 big arches of the lower section of the bridge. It was built by the order of Shah Abbas I and under the supervision of Allahverdi Khan, the commander in chief of the army and one of the most trusted people by Shah Abbas in his court. He was a Georgian slave who became the right hand of Shah Abbas, and when the construction of the bridge was finished after three years (1599 – 1602), it was named after him, the Allahverdi Khan Bridge. The bridge is all made of bricks, 298 meters long (the longest bridge over Zayandehrud) and about 15 meters wide. To make the bridge, they first widened the river to have a longer and more handsome bridge. The bridge has had many other names like Shah Abbasi bridge, Julfa bridge, Chehel Cheshme bridge, but today it is known as Si-o-se-pol. There is a theory about number 33 that might refer to Anahita, goddess of waters but on the other hand, archeologists believe the bridge was originally longer made with 40 arches, which was shortened later. Si-o-se-pol was the main bridge connecting the two main parts of the city, the royal section on the North and the Armenian neighborhood on the south. Armenians were playing a big role in the Silk Road commerce and helped Shah Abbas to make Isfahan the heart of the Silk Road. They were having their Baptism ceremonies near Si-o-se-pol, same as Muslims having their religious ceremonies like “Ab Pashan” which was a tradition of throwing water at each other for purification. Si-o-se-pol is still one of the eye-catching symbols of Isfahan and a popular gathering place among the locals. 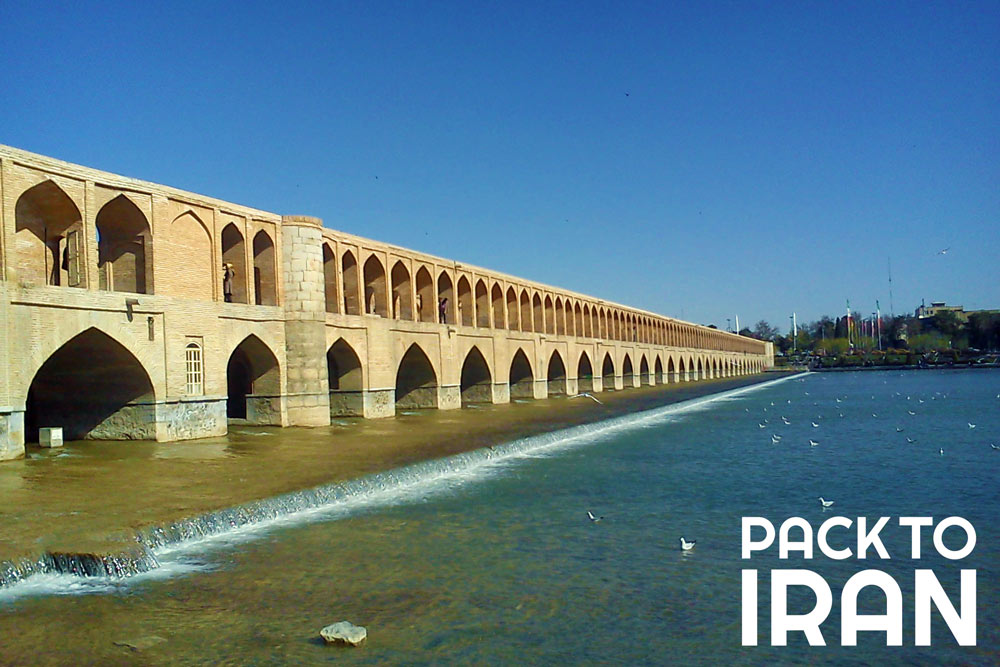 Khaju Bridge is another historical bridge in Isfahan located about 2 kilometers east of Si-o-se-pol. Because of its architecture, symmetry, and tile decorations, the Khaju Bridge is known as the most beautiful historical bridge of Iran. The bridge was built around 1650 when Shah Abbas II was the king of Iran. There was originally an older stone-made bridge called Hasan Beik at the location of Khaju Bridge when they built a brick-made one on it to connect the Khaju neighborhood in the north to the Takht-e Foolad neighborhood in the south.  Khaju Bridge is 130 meters long, 12 meters wide, and is a two-story construction. It is built in a way that can be used both as a bridge for the pedestrians, horses, and carriages and also as a dam or weir. By the order of the king, an octagonal pavilion was built at the center of the bridge to be used by him and his family on special occasions for receiving special guests. At such times, the water was blocked using the sluice gates under the bridge so that the water level rises to create a better view. The bridge was also used to guide the severe water flow towards water channels near the bridge at times of flood. The lower part of the bridge serves as a gathering place for the locals and the visitors especially at night when the locals sing together as a beautiful tradition of Isfahan. There are two stone lions on two sides of the bridge as guardian symbols of the river and the bridge. 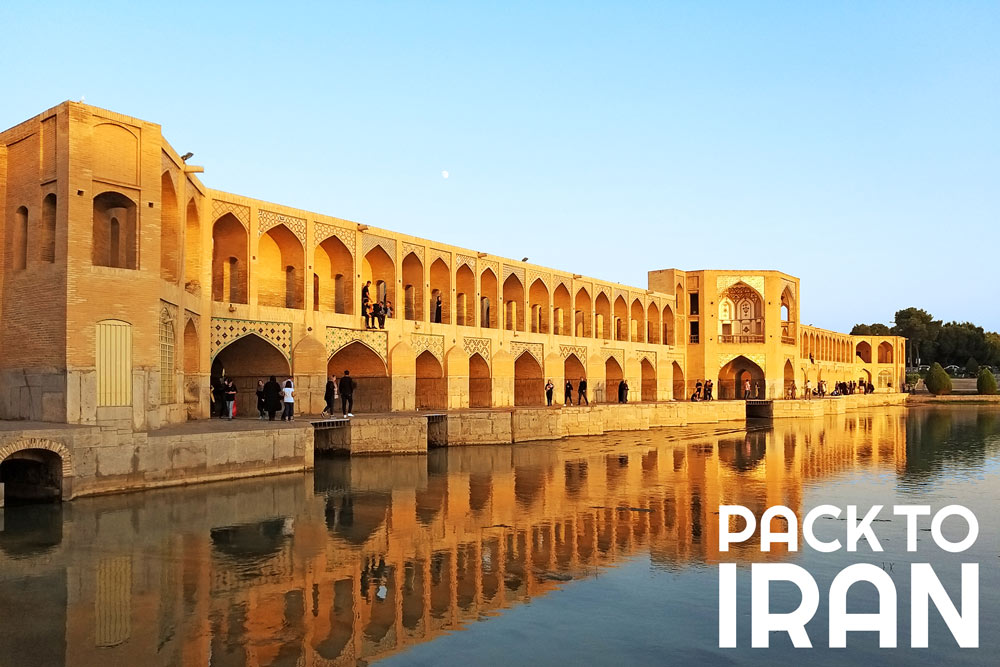 Shahrestan Bridge is the oldest bridge of Isfahan over the Zayandehrud. The construction of this bridge dates back to the Sassanid Dynasty, while the bases are believed to be from the Achaemenid Era. Based on 12 large stone-made pillars, this bridge is 105 meters long and 4-5 meters wide and is made with stone, bricks, mortar, etc. This bridge was used as a military bridge during wars and got repaired during the Seljuk Dynasty. 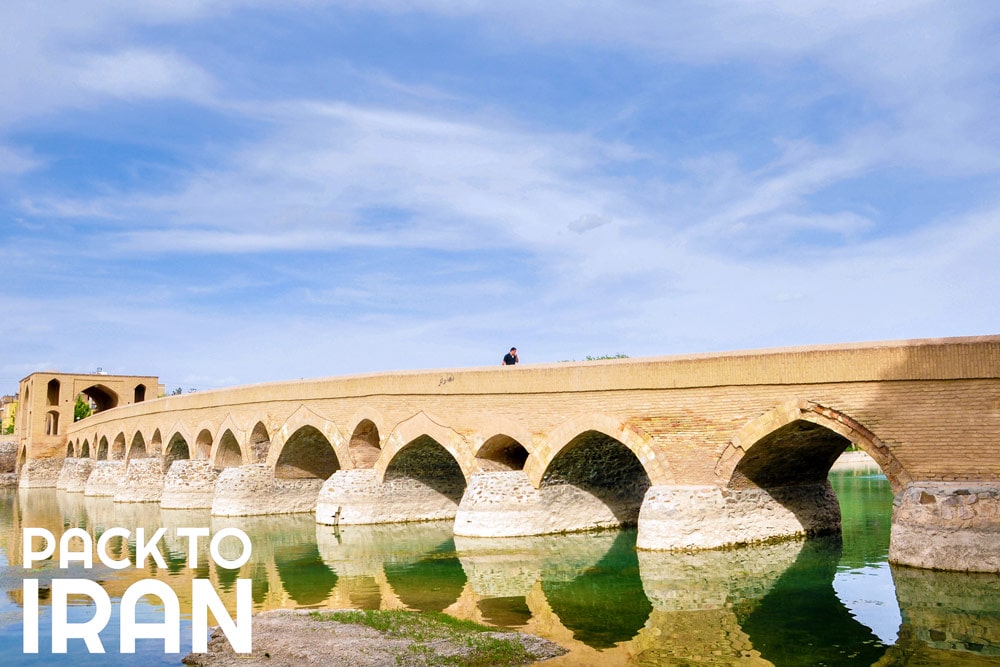 Tips for visiting the historical bridges of Isfahan

- Si-o-se-pol and Khaju bridges are about 2 km far from each other, so it would be a good walk to visit both. Shahrestan bridge is far from both bridges.

- Si-o-se-pol and Khaju bridges are better to be visited at night because it gives a better photography view especially before sunset and also the locals’ singing and gathering tradition around the bridges happen more at night. Shahrestan bridge is better to be visited in day time. 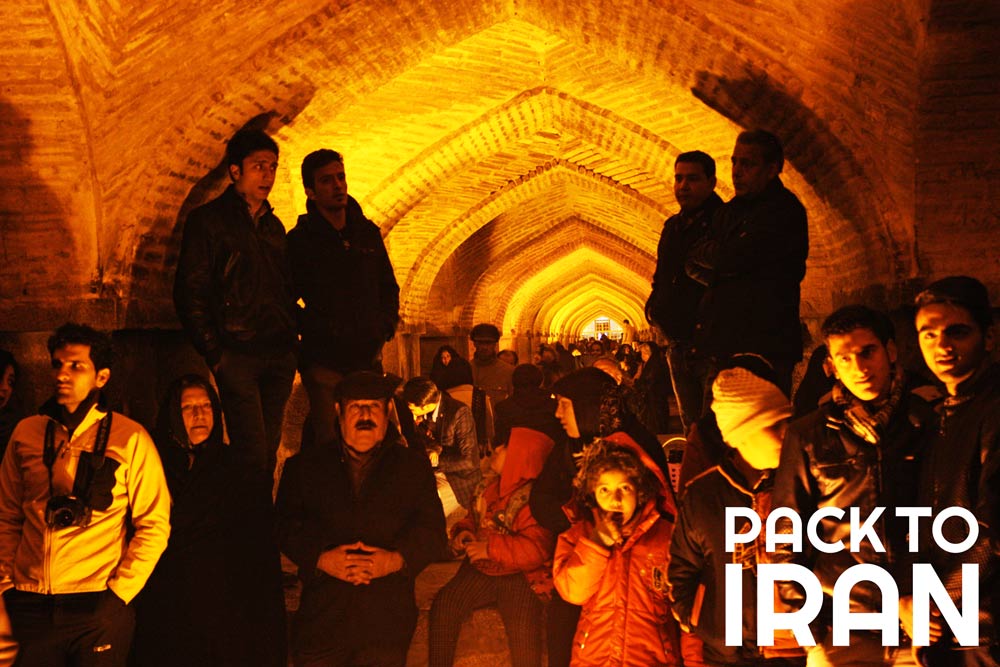 1 0
You can rate this post
Users Rated: 5 From 2 rates
Comments
Tags : Isfahan attractions