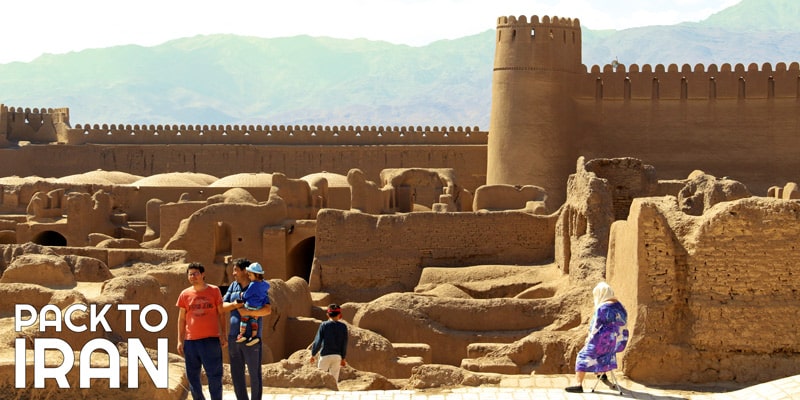 Rayen Citadel - The second largest adobe monument in the world

Arg-e Rayen or Rayen citadel is an amazing adobe castle or a fortified town, located 100 km southeast of Kerman on the slope of mount Hezar one of the highest peaks of the region. This historical monument is one of the top attractions of Kerman which reveals a lot about the architecture and history of Iran.

This fabulous monument with an area of more than 22000 square meters is the second-largest adobe castle in the world, second to the UNESCO World Heritage, the Bam citadel which is only 130 km far from Rayen Citadel! Before the catastrophic earthquake of 2003 which badly damaged the glorious Bam citadel, the Rayen citadel was often overlooked but now more people go and visit this magnificent adobe castle which easily takes the visitors into the time tunnel and help them to have a clear image of how it felt to live in castles and fortified towns like this, thousands of years ago.

The history of the Rayen Citadel

There are many historical citadels in the Kerman region, and the Rayen Castle is one of the most important and well-preserved ones. Archaeological excavation proved that the Rayen Citadel was first constructed during the Sassanid Period (224 BC- 651 AD) and it was inhabited until the late 19th century when it was gradually abandoned as people of the town left the citadel one by one and made their new modern houses outside the forts of the citadel! Since it was located on the trading routes between Khurasan, Kerman, Bandar Abbas, Baluchistan, and Fars it was both a thriving spot in terms of trading and economy and was threatened by the enemies and invaders. This citadel was damaged many times during history, but with reconstructions and renovations, it is still a glamorous construction.

The architecture of the Rayen Castle

The Rayen Citadel has a rectangular plan in 170 meters in 142 meters and is made with adobes and bricks.  The citadel only has one entrance with two floors and a small room on top, which was protected with the moat and for more protection, a chamber was constructed over the entrance gate which had some holes on its floor that made it possible for the guards to stop the invaders by pouring hot oil or throwing stones or shooting arrows to them. There used to be a deep moat for more protection all around the citadel , a part of which is still notable on one side of the citadel. The fort was guarded with 15 watchtowers which are located all around the castle and a central watchtower located inside the citadel to alert the people who lived in different parts of the citadel in case of potential dangers like enemies invasions. The top of the watchtowers is decorated with crenation that could be used for watching the area and shooting arrows through them.

Since the Rayen Castle was located on the main trade road between east and west, it was a popular spot among the merchants and caravans in the past. Therefore,  there used to be a temporary residence in front of the entrance outside the castle for the strangers and travelers who wanted to enter the citadel possibly for trading. This temporary residence also served as a place of quarantine if any of the strangers who wanted to enter the citadel had a disease, so that it could protect the residents of the castle from catching the new disease.

How was living in the Rayen Citadel?

Since old times, the Rayen citadel was known for metal production at its metal workshops. The people living in the Rayen Citadel were busy producing all kinds of swords, guns, locks, scissors, and many other metal products. You can still see some workshops at the entrance of the castle at which the craftsmen are still producing the famous and high-quality knife of Rayen using the goat’s horn as the handle of the knife! This part of the castle used to be the original bazaar where people used to trade goods for their daily life. This corridor was reconstructed in the 1990s! The citadel was divided into several sections based on the different classes of the society by constructing walls for separating the sections! Ordinary people used to live in houses that were two or three stories high with small chambers, and people from the higher level of the society used to live in bigger and more fancy houses on the other side of the castle. You will find a small castle with its fortification and watchtowers inside the main larger castle which used to be the residence of the governor and the administrative sections! This is the main reason why these kinds of places are called Arg in the Persian language! There is a hidden access way to the outside of the citadel starting from the governor’s castle through which the governor and his family could run away in the case that enemies could enter the borders of the citadel. There is a big space in front of the small castle, which was used as the main public square of the citadel, and this was the place where the governor could give an audience to the people from the balcony of the governor's castle which is facing this public square.

Another part of the citadel is dedicated to a large warehouse which could be filled with tones of grains and food in case of facing starvation and drought or being surrounded by robbers and enemies! Later on, this storage was converted to a mosque after the entrance of Islam into Iran. In another corner of the Rayen Castle, there is a small domed structure which used to be the fire temple of the citadel as the people living in the castle were Zoroastrians before the 7th century and after converting to Islam the fire temple was also converted to a Zurkhaneh or the Persian Gym that is used for practicing the traditional Iranian Sport known as Varzesh-e Bastani.

Since the Rayen Castle is not included on all of the Iran tour packages and it is not a busy site, you can enjoy visiting it for a longer time. For visiting the Rayen Castle you need to start your road trip from Kerman early in the morning so that you have enough time for visiting other attractions en route like the Shazdeh Garden or maybe the Lut Desert. There are other attractions in Rayen town like the Rayen waterfall, Rayen Jaame Mosque or the Gishigan Village. For an amazing excursion from Kerman to Rayen Castle and a guided tour nside this historical mounemnt contact us through our website.