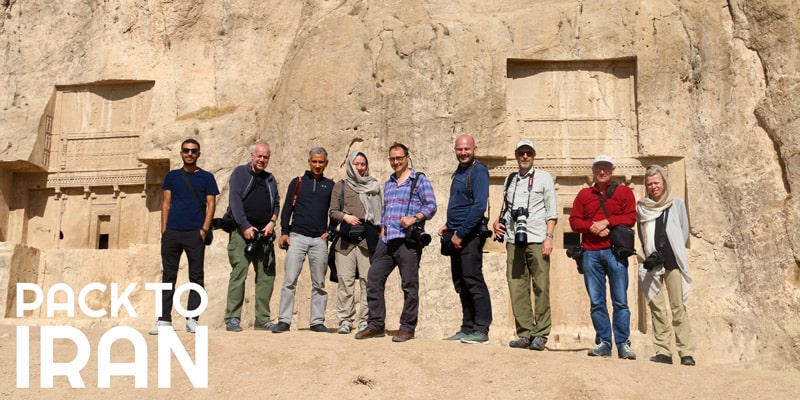 Each PackToIran tour is a chance for us to find new friends and explore wonders of Iran together. Read about Iran tour with PackToIran and see what goes on on our Iran adventures.

Salaam! I am Amin, I have been working as a tourist guide for about 13 years in Iran and have done many tours of my wonderful country with lots of people from all around the world! Me and two friends of mine started our travel company PackToIran a few years ago and we organized several tours in Iran! Here I am going to an Iran tour with PackToIran which is one of our company’s most popular tours and is named Iran classic tour!

Our group of friendly guests from Germany arrived IKIA airport which is 35 kilometers from Tehran at 10:30 am and after meeting we head to Tehran, the capital city of Iran, with 14 million residents and a variety of attractions, from modern art galleries, architectural monuments, and parks to historical legacies from the Pahlavi and Qajar dynasties. Our first stop in Tehran according to the time was the lunch stop which I had booked among the different types of restaurant according to our location in the city. As it was the first meal of the group in Iran I suggested them to choose two types of Kebab – minced lamb and grilled chicken- and a famous traditional stew which is called Ghormeh Sabzi (vegetable stew) followed with tea and Iranian pastries as the dessert.

After lunch, we visited the first attraction of the itinerary which is the National Museum of Iran. The museum is one of the best museums in Iran where you can have a brief introduction to thousands of years of Iran’s history. It consists of two sections; one building is called the Iran Bastan Museum which is the pre-Islamic archeological museum of Iran and the second building is the Islamic Archeological Museum. After visiting the museum, we took a look at the popular Tabiat Bridge (the Nature Bridge) which is a modern architectural masterwork in Tehran and then we went to the Hotel and checked in the hotel which is in the city center. As the group was tired so I arranged dinner in Hotel’s restaurant.

On the second day, we visited the Golestan Palace, the royal Qajar complex protected as a UNESCO world heritage, and the labyrinth of Tehran’s Grand Bazaar. For lunch, we tried a nice small café near the grand bazaar and then we visited the Carpet Museum which is a collection of fascinating Persian carpets. After visiting the Carpet Museum, we had a walk in the Laleh Park of Tehran, located next to the museum and the group had a good chance to see more locals and had a conversation with friendly Iranians.

On this day we started our road trip towards Isfahan (448 km). As we had a big coach throughout the tour, everybody got at least two seats which made the road trips more comfortable. En route, as we passed by the mausoleum of Ayatollah Khomeini the founder of the Islamic Republic of Iran, we had a discussion about modern history of Iran specially the Islamic revolution of 1979 and the current political situation of the country and I answered as many questions as I could! After driving for about 2.5 hours we stopped in the historical city of Kashan and visited the Tabatabai House to get acquainted with the old Persian houses and amazing interior ornaments. We also explored the lush Fin Garden, one of the nine Persian Gardens on the UNESCO world heritage list. Lunch was booked in a lovely restaurant nearby the garden, and then we continued the route toward Isfahan. We arrived in Isfahan in the evening and after checking in the hotel and a short rest we decided to take a walk along the lovely Zayandeh Rud River which is not far from the hotel we stayed in it. We visited one of historical bridges crossing over Zayandeh River, named the Si o Se Pol (33 arches) Bridge. For dinner we went to a local restaurant nearby the bridge and I suggested the group to try Fesenjan which is a very famous traditional Iranian dish and a lovely saffron ice cream for the dessert.

Glorious Isfahan is known as the pearl of Persia and according to an old rhyme, Isfahan is called “half of the world!” This city was the capital of Iran during the Safavid Dynasty, when the best examples of Islamic art and architecture were built in Iran. We started the sightseeing of Isfahan with the great Naqsh-e Jahan Square and the monuments around it, including the Ali Qapu Palace, Sheikh Lotfollah Mosque and the Shah Mosque. The whole Naghsh-e Jahan complex is protected as a world heritage by UNESCO. Lunch was booked in a restaurant around the Naqsh-e Jahan square and the group tried quince and plums stews which are the local dish of Isfahan and for the dessert I prepared a box of Gaz, which is the famous nougat of Isfahan, to be served with tea and coffee. Then we took a look at the handicrafts bazaar of Isfahan and visited the Chehel Sotun Garden and Palace (another Persian garden on the UNESCO heritage list), displaying fascinating wall paintings. We went back to hotel for a short rest then we walked along the river to visit another famous bridge on the Zayandeh river, named the Khajoo bridge.

We continued our Isfahan city tour, by exploring the magical Isfahan Jaame Mosque housing architectural gems from the 11th to the 19th centuries. This UNESCO world heritage site is also known as the encyclopedia of Iranian architecture. Then we went to the other side of the city where we took a walk through the Armenian New Julfa Quarter which is home to a big population of Armenians who have been living in this city since the reign of Shah Abbas, and visited the Vank Church. In the evening we enjoyed listening to some Iranian music at the Music Museum of Isfahan.

Early morning on this day we said goodbye to the memorable city of Isfahan and drove to Yazd (323 km). Yazd is the biggest adobe city in the world with magnificent architecture including narrow lanes, wind catcher towers and mud-brick houses. Yazd is also the center of the followers of Zoroastrianism, an ancient religion in Iran. As we were passing by Naein we had a stop nearby its old Friday Mosque – one of the oldest mosques in Iran- and we had a refreshing tea and coffee prepared by our nice bus driver. Then we continued the road toward Yazd. after arrival in Yazd we visited two heritages sites of Zoroastrian religion, the Tower of Silence and the Fire Temple. Then we walked through the atmospheric old quarter of the city, which is protected as a UNESCO world heritage and we learnt more about water management and Qanats at the Yazd Water Museum. For dinner we tried Dizzi which is a very tasty traditional Iranian dish and for dessert we tried some delicious Yazdi sweets which this city is famous for it in Iran.

In the morning we hit the road and drive towards Shiraz, the city of roses and nightingales (440 km). On the way we stopped to visit Pasargadae where the glorious tomb of Cyrus the Great, founder of the Persian Empire is located. We Arrived in Shiraz in the afternoon we checked in the hotel first had a short rest and then we joined a local family to enjoy a home cooked meal and get familiar with Iranian family life and hospitality.

We drove 60 km to visit one of the highlights of the trip! Magnificent Persepolis, the ancient ceremonial capital of the Achaemenid kings dating back to 518 B.C. We walked through the amazing ruins of Persepolis and felt the glory of ancient Persia. Then we visited the Naqsh-e Rostam, (Necropolis) as impressive as Persepolis, where the tombs of Persian kings were carved into the rocks of a mountain. We had lunch in a beautiful restaurant nearby Persepolis and then we drove back to Shiraz and visited the Tomb of Hafez, who is the most famous Iranian poet, and explored the Vakil Bazaar.

On the last day of the tour, after breakfast we checked out the hotel and the group was transferred to Shiraz INTL Airport for their flight back home. The whole group were satisfied with this Iran tour with PackToIran.