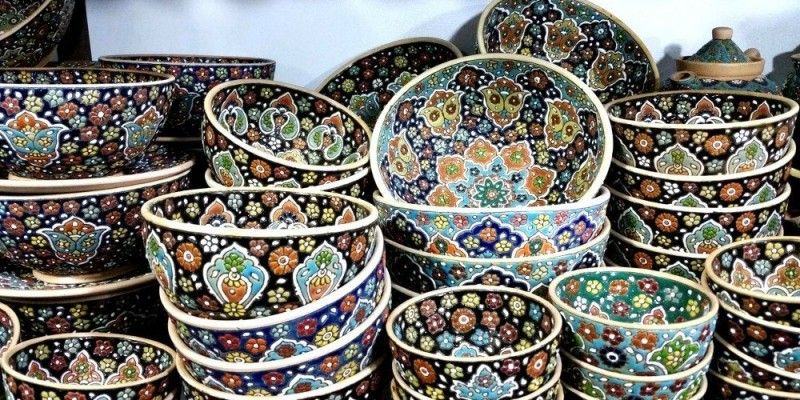 As one of the oldest and most important inventions of humans, the art of pottery in Iran traces back to 8000 years B.C. Ancient potteries let the archeologists know more about the society, art, and technology during a specific period and Iranians have made pieces of pottery using different tools, pottery methods, and ornamental motifs during millenniums.

Since Iran was located in the middle of the other ancient civilizations, and people had interactions with other societies, the art of pottery was flourished in every corner of this vast land, including the Marlik Civilization, located in the north of Iran (728-330 B.C), the Sialk Civilization located near Kashan (around 400 B.C), the Susa Civilization in the southwest of Iran (3800-3100 B.C), the civilization of the “Burnt City”, located in Sistan and Baluchistan, and many other places. The potteries of these ancient civilizations are mostly decorated with abstractive motifs of animals like goats and storks and symbolic geometric forms representing the sun, the farming lands, etc. The potteries made during the Achaemenid period were statuettes of bulls, which shows the importance of this animal in ancient Iranian culture and legends and during the Sassanid Empire, the pottery pieces were glazed with green and blue.

Inspired by Islamic art and philosophy, the Iranian pottery started to flourish again during the Islamic era. The potters revived their pottery traditions during the Samanid Period and this art was improved with the influence of Islamic and Chinese art during later dynasties, like the Seljuk, Ilkhanid, Timurid. Just like other arts and crafts, Iranian pottery was at its best during the Safavid Dynasty, when artistic vessels were made and professional glazes were applied and they were decorated with the most delicate patterns.

Today pottery wares are still widely produced in some cities of Iran like Lalejin located near Hamadan, where potters make delicate potteries with colorful glazes, Meybod, a historical city in Yazd province where pottery wares are decorated with very charming motifs of fish, birds, and faces named “Khorshid Khanom”. Kalpoorgan is an unknown city in Sistan and Baluchistan Province, where local women make vessels without using a pottery wheel and simply design the reddish clay with lines and dots.

There are still many active pottery workshops in the cities mentioned. Visiting these workshops and trying to make a piece of pottery the way Iranian potters did during millenniums is going to be a wonderful experience when you visit Iran.